Show yours if you want.

Before this, I had a Swiss Military dive looking thing that was in a drawer since the mid '90s until I sold it a few months ago, and an Esq that was a gift 15 years ago from my mother-in-law that I said "thank you" and stuck in the same drawer right away. The funny thing is, I took them both out a few months ago to sell and the Esq is actually a women's watch. WTF?

She said she didn't know and I gave it to my cousin who hoards cheaper watches.

I bought a pilot watch last month and have been absolutely infatuated with it from the moment I opened the box. It comes off for showers but that's it and I told my wife she can sleep in the other room if the bed isn't large enough for the three of us.

Laco Dortmund, 45mm diameter. There are many pilot watch brands out there but I gravitate towards Laco because they didn't modernize the watch like the rest. It's like comparing a Gibson R9 to a Les Paul Traditional. Traditionals are fine guitars but don't cut it if you want 50s specs.

Other companies contour the lugs, polish the case, add complications and power reserves. The originals weren't like that, so I don't want mine to be either. It's a lot like Les Pauls. There are much getter guitars out there ergonomically but we're all on MLP and assume we love Les Pauls including their flaws.

This is very stupid but I'm buying the 55mm in a few weeks as I've been obsessed with it for a good three weeks now and the GAS has been relentless. Relentless. Other people spend a lot more on watches and have huge collections, so I don't feel bad having two that and I don't care that they look the same because these are the only watches I like enough to buy, plus the 10mm difference will make them wear very differently. Well, I do like black and blue dial Rolex Cellinis but they are too small and wouldn't wear something that expensive.

I don't regret the Dortmund purchase at all and look forward to the day I hand it to my son (assuming he will want it). Being a Les Paul nut, I had his birthday engraved on the back in the Les Paul format, 9 0914, and will do the same to the 55mm.

This has been my everyday wear for the last 4 or 5 years.
Funny, the battery died last December while I was at LtDave's shop.

But my work phone was upgraded, so I decided to give a smartwatch another try after a mediocre experience with the Galaxy S2.
Very happy so far with the new Galaxy Watch 3 titanium. Once you get into fine watches you need to start calling them timepieces!

I love my watch too... have had it for 7-8 years now and still very satisfied with it. Omega seamaster... though i went for the quartz version as the maintenance is easier and cheaper... and i don t care about automatic mechanisms. Plus with the money not spent in service cost i could prob get an automatic soon anyway... though i did spend that money on Les Pauls lol

I only have a few pieces, I think around 5 or 6. Each of them means different things to me and a few represent important times in my life

The showstopper in my small collection is a 116610LV aka ‘The Hulk’. The dial is simply magnificent and even more so when the sunlight catches it I also really value my Birth Year Seiko that I put some time into restoring. It’s all-original from 1977; apparently this particular model was often pillaged for parts for Seiko Divers watches, so the fact that this one hasn’t had anything replaced on it is pretty cool. The lume has near enough faded to nothing but it’s still a lovely piece and a keeper for sure My daily beater is a Suunto S9 Baro as I’m a runner, but I had to pick out the best looking of the different models 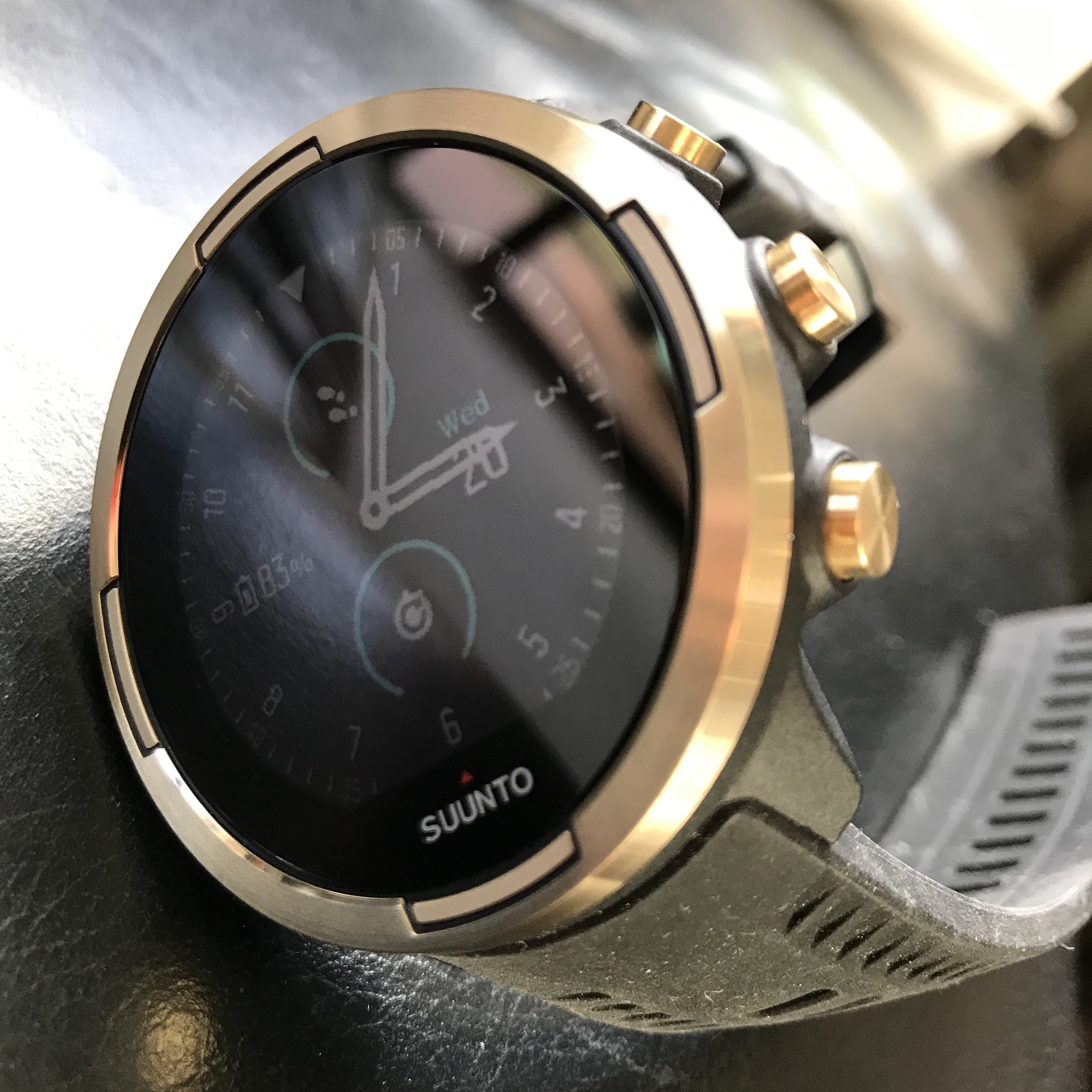 Here is my little baby.

Bought it after have gotten my first "real" job, which i still have.

It kinda reminds me about being unemployed for 6 years straight, and that hard work pays of in the end.
Enjoy my random photos of it lol

Since retirement, the only time my watches ever come out of the safe is for the occasional winding, and fondling.

I have a few watches but nothing extravagant, I’m a big fan of Raymond Weil

SteveC said:
Since retirement, the only time my watches ever come out of the safe is for the occasional winding, and fondling.
Click to expand...

I wear a Garmin Instinct, it's totally 80's casio looking, I like to track heart rate, movement, sleep, etc. My other main wearer is a running watch also from Garmin, old but it still works. I haven't taken my fancier looking watches out in years.

i had a nice watch...but somebody stole it.
so i have to improvise. I have a Tag Heuer, which is probably my favourite. Currently sitting idle (battery removed). (Not my photo). Not this exact model but supremely close. This one is still active. But I’m REALLY like my Apple Watch SE to be honest - I was super skeptical and having to charge everyday can be frustrating, but the thing consistently surprises me. All you need them for is to tell the time!

What next? Who's got the biggest skid mark on their Calvin Klein under crackers?

Go play with the buses!!!

I've got 2 subs, and 2 omegas I rotate but I usually wear my omega speedy moon watch most the time. 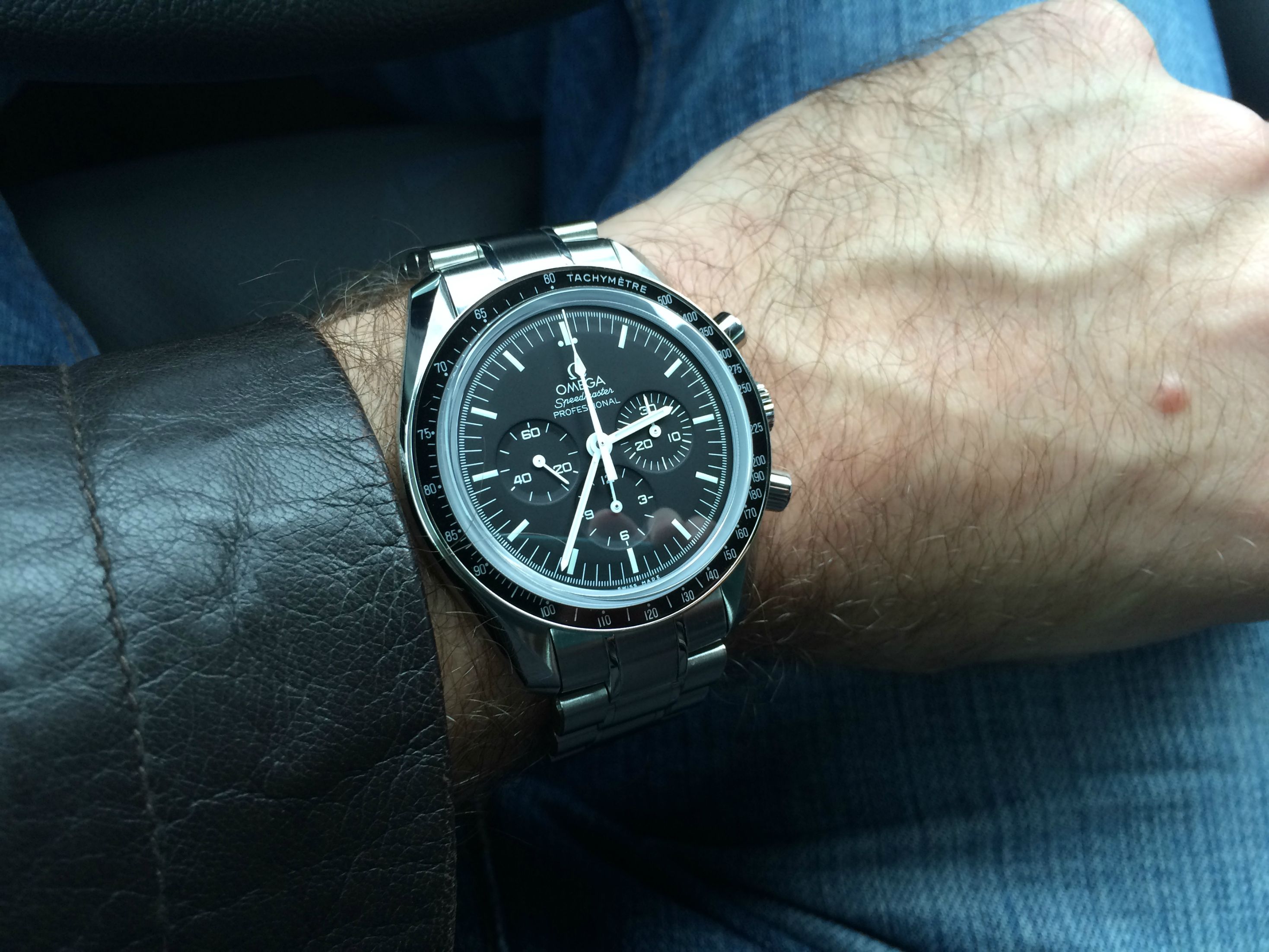 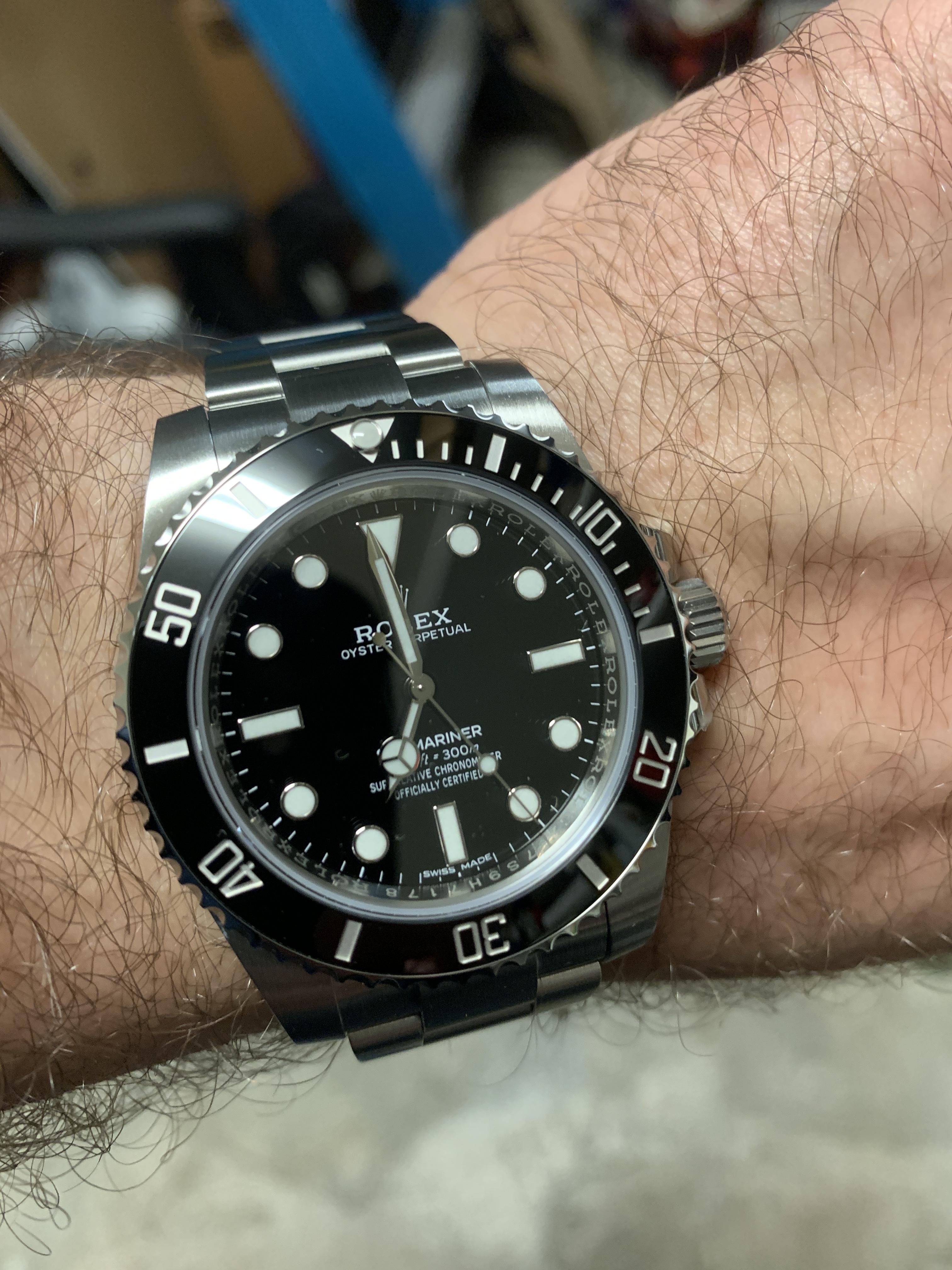 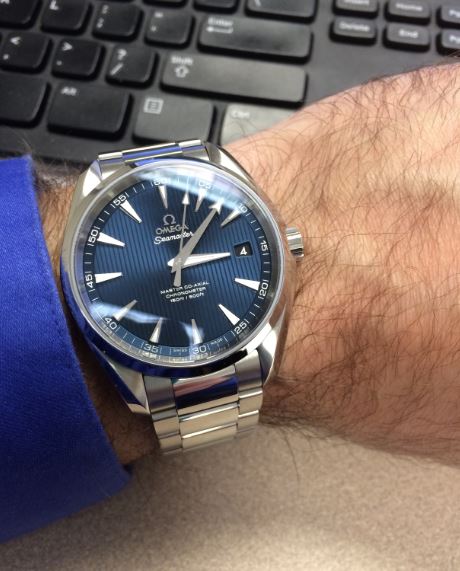 When I wear this one I get compliments as the blue mix with the yellow gold and ss band really pops. I'd actually prefer this blue face with ss but they only make that one in 18 carat white gold 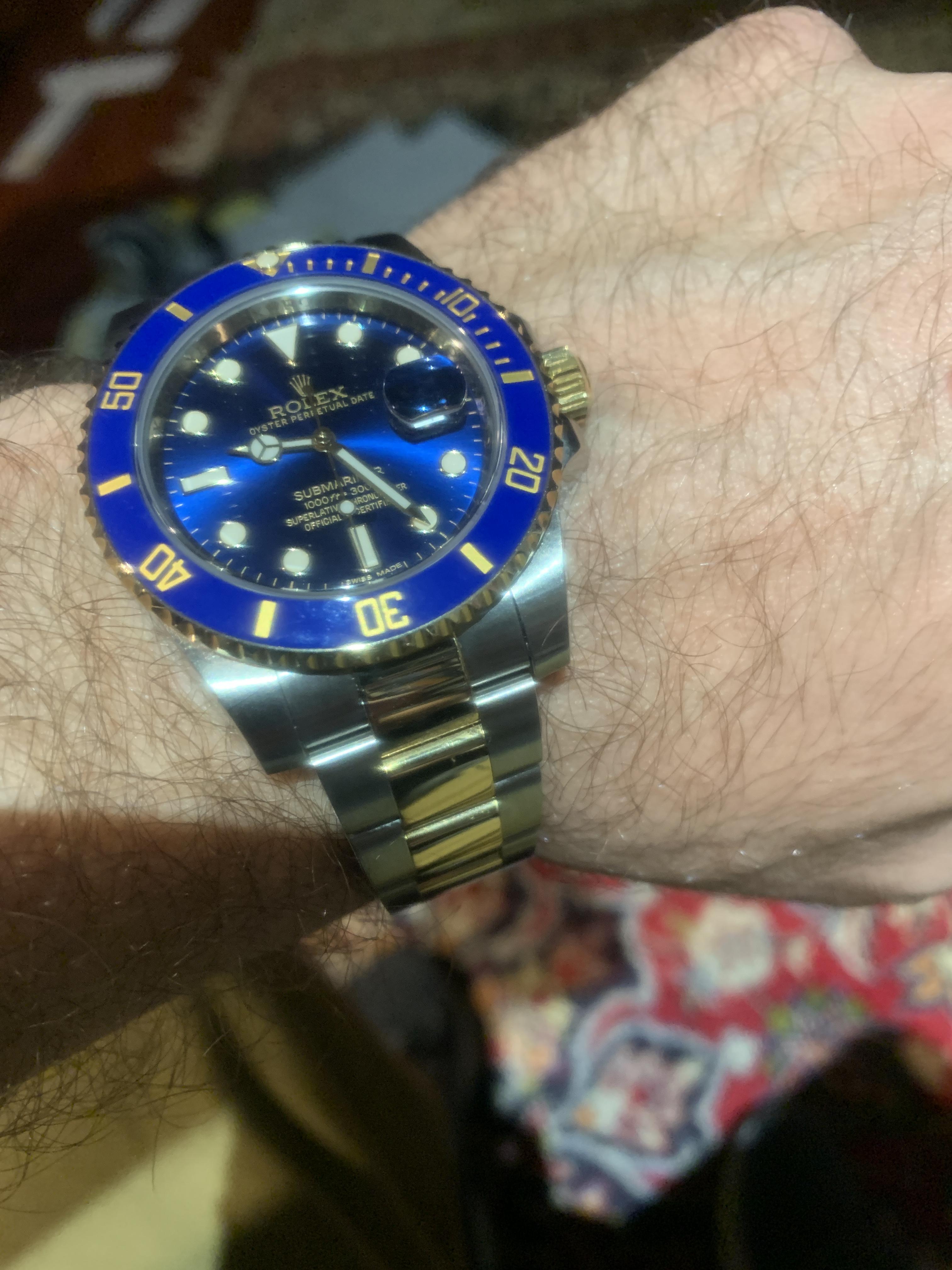 Oh I have a Tissot motogp watch too but it's a bit bulky so I rarely wear it. Decent watch for a quartz one. No pic of that one though.

not a watch wearer, but if I was a Sinn Diapal always appealed.