TheX said:
After a long wait, picking this up this evening. Walther Q4 SF with trijicon RMR. We can't have those.

Progress is slow on the 8.6 BLK upper. The stripped upper arrived today, so I have all the parts to assemble (almost).

Pistol length LR308 handguards are damn hard to find, so I ended up buying an open box discontinued Samson. When I tried to assemble it today, I could barely get a couple of turns on the receiver nut. The threads on the nut are gummed up with red loctite. Not going to bother with trying to heat it up and strip the loctite - I just ordered a new nut from Samson.

I'm waiting for my thread adapter so I can put my suppressor on it. It's a weird thread pitch, but Hughes precision makes them. The guy on the phone was nice, I'm just waiting for the next run.

I ordered a used Bering Optics Hogster-R thermal scope. Considerably nicer than the Hogster Stimulus that I was considering. 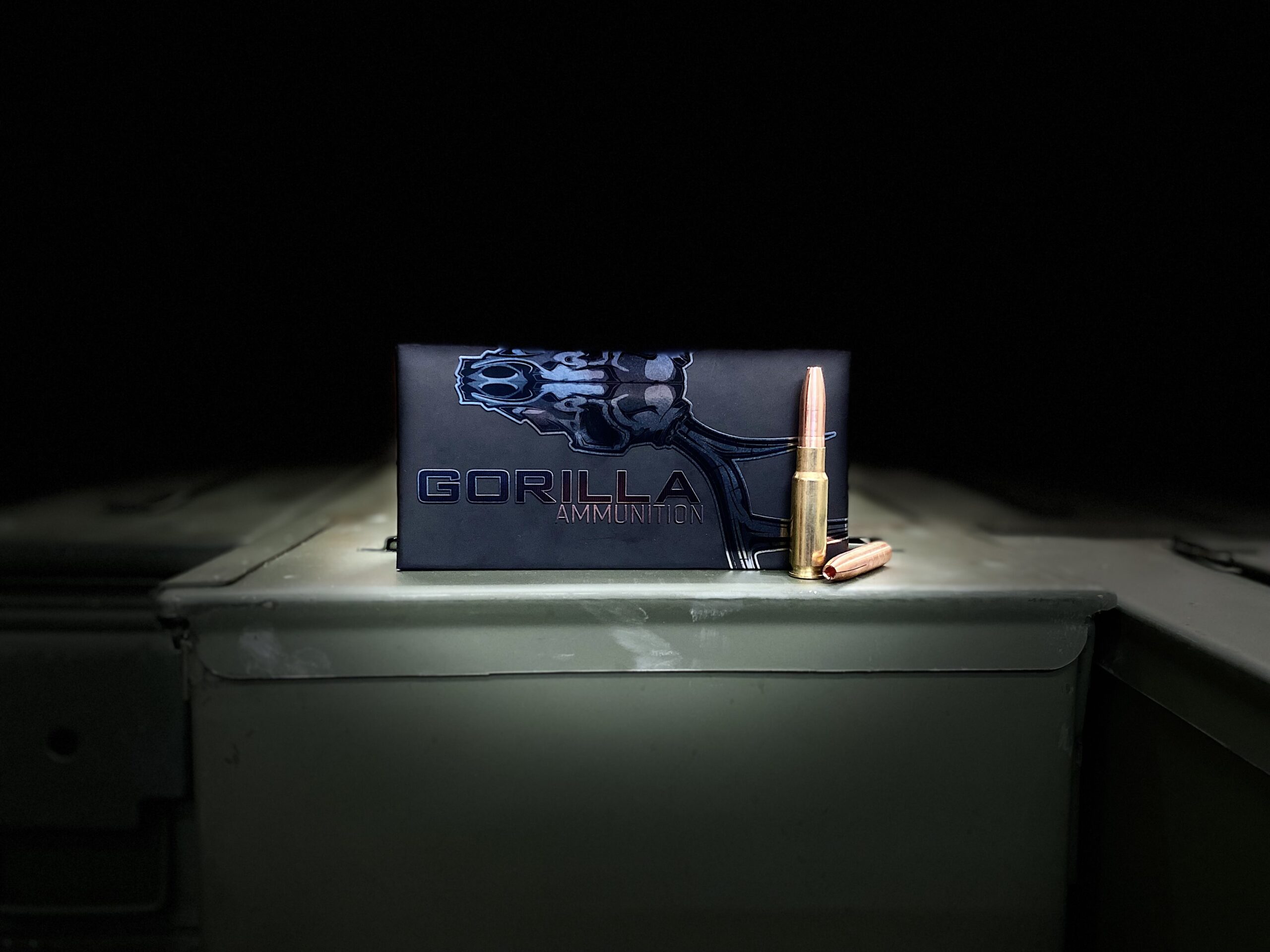 Initial sales over the past few weeks were limited to "card holders" who bought their barrels directly from Faxon. I bought from a dealer, so I didn't have a card.

Edit: Glad I was ready the moment sales opened up. Already sold out.

The "long bullet" thing is really taking off.

New grips added, and they work wonderfully with the checkering. I bought the stags with the intention of putting them on the Alchemy. 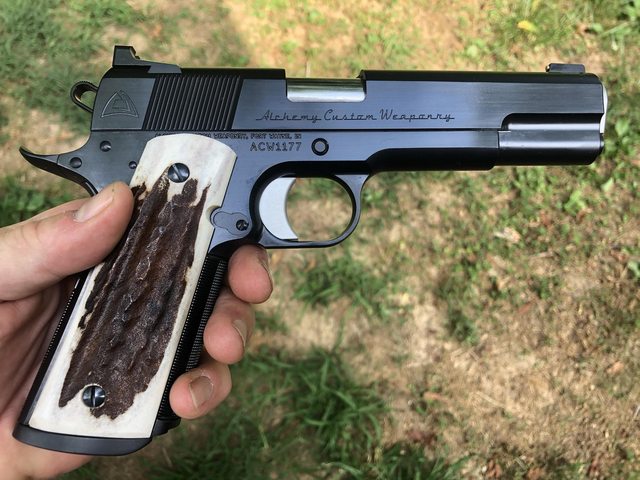 @JTM45, are you still liking the air gun?

Love it, the co2 cartridges last a good while and man it’s fun

Most places aren't QUITE that far out... but seems that in the majority of the country, the term has lost it's gender association.
Click to expand...

Dude was never about gender it was about cluelessness.

Went shooting at an indoor range today. I went to meet a guy selling this 22LR target conversion kit. $180 including the case. Seemed like a good deal.

I had never gone to this range, now I’m kicking myself. It’s ten minutes from my house and FREE.

Did I mention it’s free?! Amazing. All you need to do is preregister for one-hour blocks (you can do several in a row if you choose).


It‘s county owned, and run by the state wildlife department. Public hours on weekends two evenings during the week.

It has been decades since I tried my hand at one-hand old-school Bullseye shooting. Things are a LOT fuzzier than I remember.

It was pretty satisfying setting my target to the 50 yard wall, and watching the young whippersnappers miss at 10 yards!

This dude next to me was slow-firing a full size pistol, two hands and sometimes benched. With a laser on it (shown below).

At an earlier point, there was a guy benching a 300 Blackout (NOT subsonic! Friggin loud) pistol. He was shooting at ten yards and his groups …. groups?…. were maybe 6-8”. That’s SIXTY MOA for those who don’t want to do math. Benched. Slow fire.

I guess I’m just bragging a little. Everyone has to start somewhere.


It was a really enjoyable day. One of the ROs (bonus…pretty young woman) even sweeps brass between strings, and made sure to collect my .45 ACP separately and return them to me.


Early on she asked “do you save your brass?”. When I said yes, she replied “you look like you do”. I assume she said that based on my age, gear, and one-handed bullseye stance. Maybe she sees enough shooters to know most geezers are reloaders. Or maybe I just look cheap.

Look up at the pics…. This facility is primarily an LEO training facility during the week, and open to public on weekends. @scott1970….. which of those two groups do you think hold the majority blame for all the holes in the ceiling? I was NOT going to ask the ROs.

Who said:
Look up at the pics…. This facility is primarily an LEO training facility during the week, and open to public on weekends. @scott1970….. which of those two groups do you think hold the majority blame for all the holes in the ceiling? I was NOT going to ask the ROs.

I've seen some really poor shooting from some police officers over the years, but I can't say it's generally bad enough to hit ceilings at close range. Not saying it couldn't happen, either. I'd guess a member of the public new to shooting...maybe....hopefully.....most likely not, though.

I have some new leather for the Alchemy due to arrive tomorrow. I've not tried this maker before, so I'm curious to see how it turns out.

I remember getting a Kimber govt' size model from a friend who included ammo and the 22 conversion kit (also from K). After selling the kit for over $300 (some 20 years ago), and figuring in the cost of the ammo that was included, I figured I had about $600 in just the pistol. 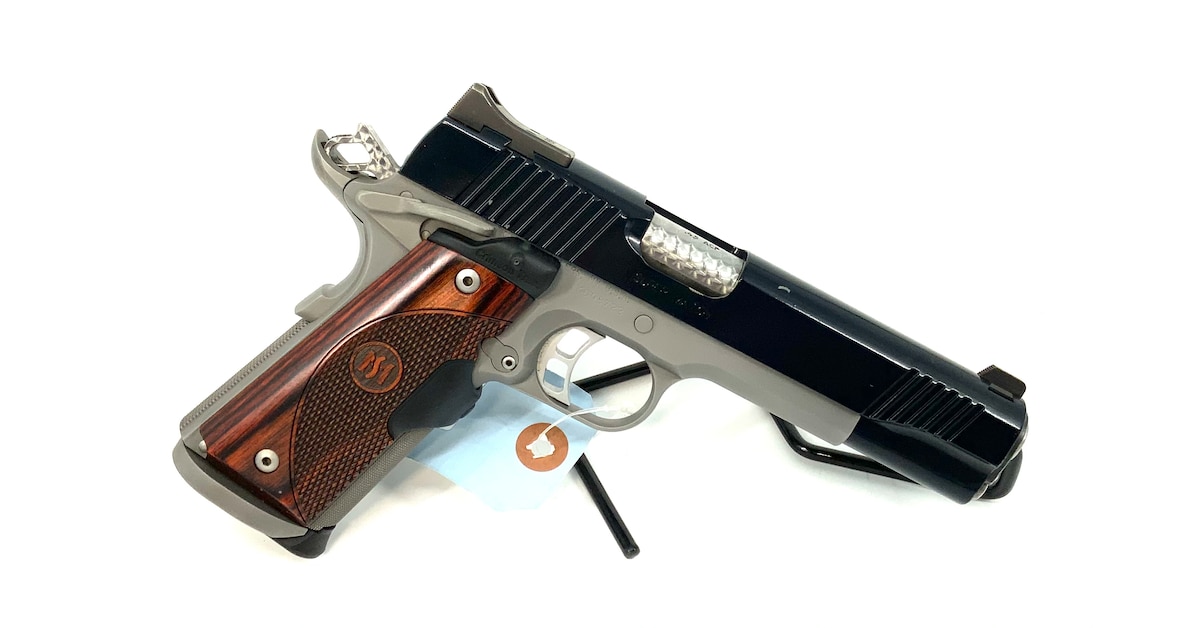 BlankinLoud said:
I also need smaller diameter grips my GP 100. I can't wrap my fingers far enough around the Hogue mono-grip to squeeze down and control the recoil. Currently hitting a pie plate sized target at 50 feet two times in six shots....unacceptable.
Click to expand... These are Crazy Eddie prices. 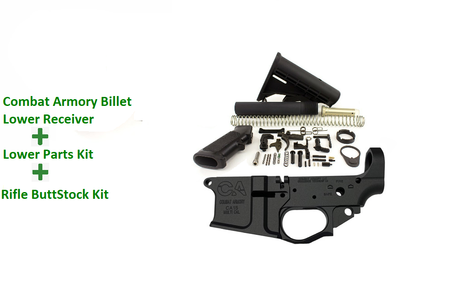 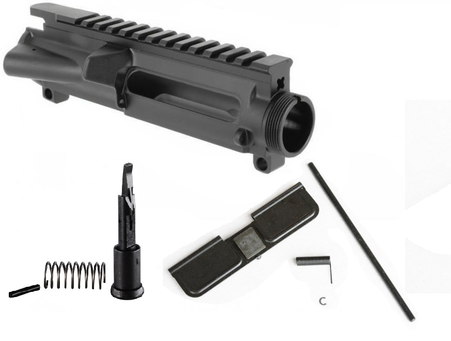 At these prices you can build an SBR for under $600 including FFL transfer AND ATF tax stamp.

The Palmetto Leather Works holster arrived a few days ago, but I've not worn it until I went to the range today. Here's what I really like. It's very well made, super comfortable to wear and it feels like a broken in holster from the get-go while still properly retaining the gun. The gun draws wonderfully from it. Even better was the turnaround. I got this one in just over twenty business days. Compared to my two favorites, Ryan Grizzle and Milt Sparks, that is unbelievably fast for a nice holster. Palmetto is the company that makes the holsters Wilson Combat sells on their site.

My only beef, and I know it's somewhat petty, is the color. It simply does not look like mahogany and has too much brown to it. Otherwise, I'm extremely impressed with this company and would buy from them again without hesitation.

For whatever reason, my wife hates the elephant hide trim. 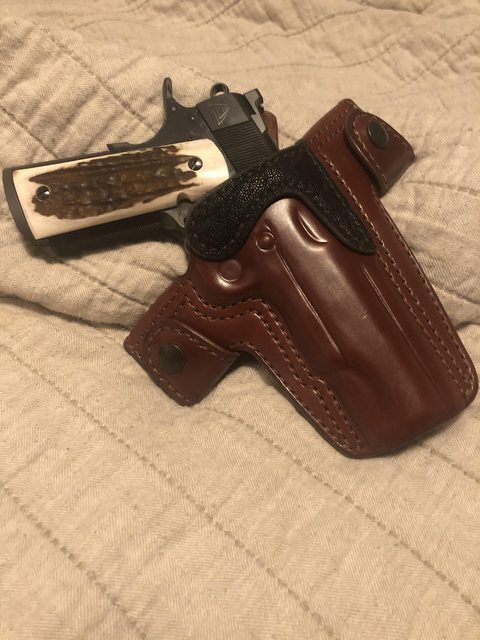 scott1970 said:
It simply does not look like mahogany and has too much brown to it
Click to expand...

That's because your definition of "mahogany" is this:

Last edited: Wednesday at 4:58 PM
You must log in or register to reply here.