How I "un-mud" the Broadcaster / Nocaster Blender Circuit

I really like the early blender circuit, used in many of the earliest of two pickup solidbody Fender guitars.

The problem is that mud position. It's such a problem and near-useless position that it's completely expected and acceptable that it will be modified out of even original vintage instruments. Some of the most valuable guitars in the world - the early Broadcasters and Nocasters - and it's fine to change the circuit because it's just generally considered a useless position. That says something. "Leo got it right the first time" is almost always true, but not every time, and I'm confident he would agree, himself.

I keep the dropping resistor, as it seems to help add a little extra resonance or at least give a more distinctly different sound at the former mud position on the switch. I change the .05MFD cap out for something much smaller, though, and get kinda a hint of a cocked wah with the harsh top rolled off, in that switch spot.

In this video, you can watch me experiment with some low cap values in that position and hear the sonic differences they make in realtime, as I'm picking my favorite for this 0514 Nocaster pickup set.

This is a correct diagram of the original blender circuit that I'm discussing and showing: 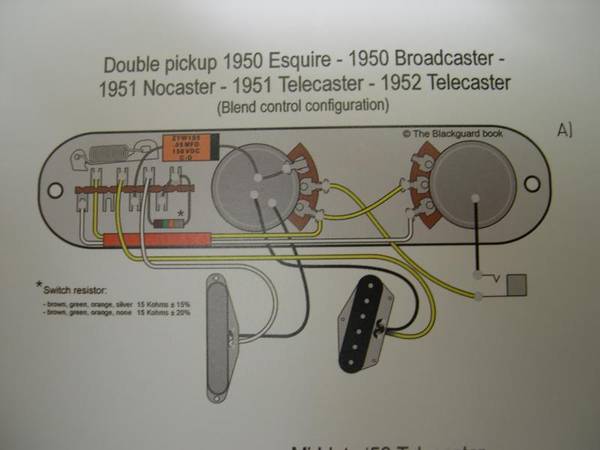 Careful googling this one, there are mostly incorrect diagrams out there, some won't even work at all. The one above (from Nacho) is correct.

Thx for sharing, James! For decades, I'm a BIG fan of low value caps in parallel with PU's, and not only for cocked wah tones.

A 3,3nF in parallel with a Filter'Tron is surprisingly efficient to approximate a P.A.F. ish sound, for instance.
And a 1nF cap drags the resonance of standard Strat PU's towards the sound of "hot" single coils (SSL5, F500T etc.). That + a tuned LR(C) filter à la Bill Lawrence Q filter = a tone control much more versatile than the usual low pass control - but without the downsides of BT controls involving series caps.

You are giving it more credit than deserved "near"

While I love the blend wiring in a tele...the usless mud position never is used. I will keep watch on this thread and see if you figure out something!
You must log in or register to reply here.

Help me understand the electronics behind guitar wiring...
2