Congrats on a real beauty and a happy ending! I know I'll be using Creamtone for parts in the future, you can't put a price on customer service like that!!

Mr. Satchmo said:
Seriously. MY dream guitar growing up was a Les Paul Custom, and they were always out of my reach because of how expensive they are so I'm thankful that I was able to get this one in the first place
Click to expand...

Same here. John Sykes and Randy Rhoads doing what they did on a Les Paul Custom made me want one in the worst way. I finally got it and it's everything I dreamed it would be.

LPC headstocks rule. The split diamond is both beautiful and iconic. It always grabs my attention when I open the case.

ehamady6 said:
LPC headstocks rule. The split diamond is both beautiful and iconic. It always grabs my attention when I open the case.
Click to expand...

Mr. Satchmo said:
I think most of you are very familiar with the tragedy of my CreamTone Les Paul custom. I purchased my 1996 Les Paul Custom in late January from a friend, named her Black Dahlia (After the flower lol) and since the beginning I debated on whether or not to leave it stock or to byCreamTone parts for it. I decided a couple weeks later to send it to CreamTone to have them put together my dream custom. This was the guitar when the work was done in early April 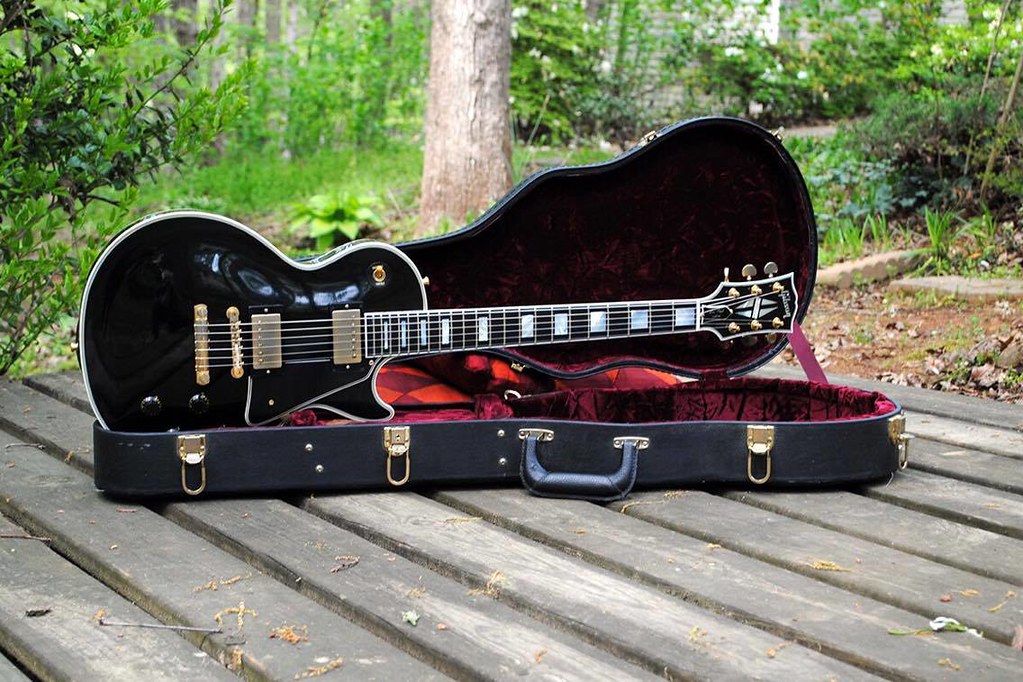 UPS mishandled the package resulting in damage to the headstock veneer, damage to the binding and separation of the fretboard from the neck too.

I sent my Guitar to Gibson's Restoration department to do the work after UPS agreed to pay for the reparation, and when the guitar was finished, UPS backed out on paying the full cost of repair and transportation as they had originally approved to do ( They had received a repair estimate from Gibson and approved the full cost) and wanted to pay $600 less than what the full amount was.

Seeing that I would lose the guitar because UPS took 21 days to get back to the CreamTone guys about paying out and gibson only keeps the guitar for 30 days or they sell it, Lonnie from CreamTone decided that would pay for the full repairs of my guitar and then fight UPS for the rest of the money.

I am so blown away by this noble act by Lonnie and his company, they didn't have to do this for me, but my experience with them has always been that their customer service is incredible. They go above and beyond for every single customer to make sure that they are satisfied 100%.

Thank you Lonnie for the amazing gesture, I am so amazed by your graciousness.
Click to expand...

Gibson called me and assured me they would whatever is necessary to get the neck finish issues resolved, without me having to send it again. They will pay my local luthier to buff it and polish it.

The guitar is fantastic. I love it

I would think they'd be a tad embarrassed by that bubble-wrap move, after all. Somebody got a swift hand to the back of the head.

Glad to hear this ordeal of ended well. Your guitar looks fantastic and we've all learned that Creamtone is one standup outfit. I'll definitely patronize their business. Here's to Big Brown Dump paying them back.

Gibson did a great job for you, and you have repaid them with this post. I usually think it's silly to name guitars, but you came up with a good one. And this way, we don't have to constantly refer to it as "that one that UPS destroyed." Terrific collection, too. As for the bubble wrap marks in the nitro, that's a boneheaded move by the Custom Shop, since we all know that nitro remains soft for quite a while and marks (or, worse, deforms a bit) under pressure. It's probably a little thing, but not necessarily. It's easy to eff up a new nitro finish. I would give it time to recover on its own -- it might -- and if it doesn't, then try polishing it out from finest to whatever-it-takes to get a proper surface again. Avoid sanding through! Worst case is a return to Gibson to deal with it.

Dig the half-and-half saddles. Has the feeling of worry had time to fade into relief now that it's back in your hands? Sometimes those anxious, stressful situations take a while to feel better.

Also, the whole, "Gibson will sell it in 30 days" business seems kind of nuts. Awfully quick, IMO. ...and where are these for-sale instruments out of their repair dept?
D

So glad you got it back. Here's to a long and happy time playing the stuffing out of it
You must log in or register to reply here.

F
Anyone ordered from Creamtone in the last week?
5 6 7