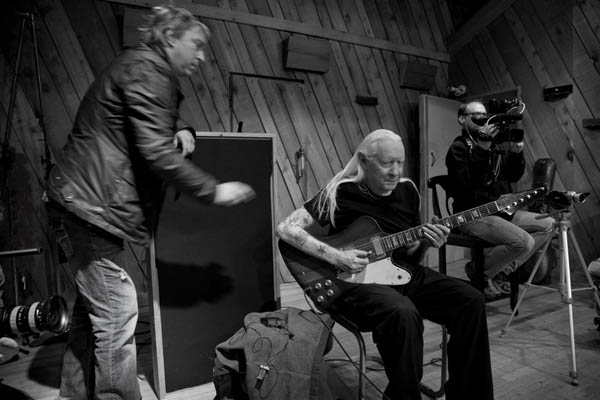 Its quite ironic that he wonderful Gibson Firebird Guitar is celebrating its 50th Birthday, especially since I just started doing my new Slide Guitar Summit album, and the first sessions were cutting a tune with none other than JOHNNY WINTER!

Johnny has long been associated with the original reverse Firebird design, and he has used it extensively since his very early days. It is easily one of the coolest new guitar designs ever created after the initial days of the Les Paul. Its very true that with the creation of Gibsons Firebird and ES series, 330, 335, 345, 355 etc., you could argue that they actually added two more classic designs that can certainly be imitated, but never duplicated when it comes to electric guitar design! 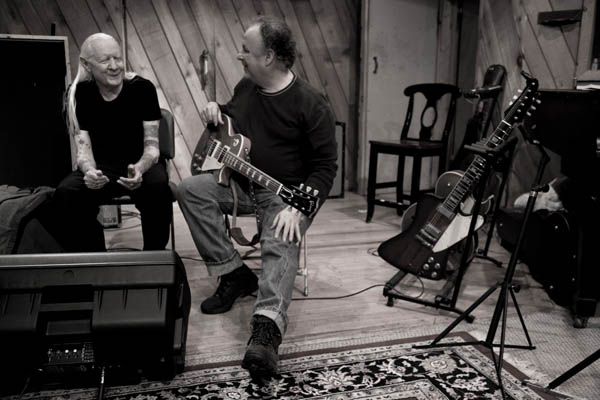 The first time I saw the Firebird, it instantly excited me. It seemed like a car of the early 60s, where it was already in motion just standing still! A truly great and exciting design and I sure wish I owned the one I foolishly sold about 15 years ago for peanuts! It was a Firebird III that I found in a NYC pawnshop, and it had the incredibly rare combination of having the reverse body, but with the non-reverse headstock! I have vowed one day to get another one somehow, and this one was also a 1963, the first year of production for the Firebird, although its combination of reverse and non-reverse characteristics would point to it being a transitional guitar, made before Gibson went to its second-generation Firebird style. This style was used extensively by the great bluesman, Clarence Gatemouth Brown. Lets also not forget how incredibly cool founding Rolling Stones member, Brian Jones looked and sounded with his and how many people he exposed this incredible model to!

Besides looking incredibly cool and futuristic, the Firebird introduced the mini-humbucker to the arsenal of already great Gibson pickups that were available, and a new, crisper and cleaner tone was now available in the humbucker format, also with a sleek looking, clean design that totally befitted the guitar it called home.

In the early 80s I wrote a book entitled Rock Guitar for Future Stars (Ballantine), and was so in love with my reverse Firebird III at the time, that I used it for almost all the photo examples and illustrations of technique in the book. One thing I certainly remember form owning that guitar was how uncannily it seemed like something totally new while at the same time something very familiar and comfortable to hold and play. It was just one of those guitars that fit like a glove for me, and I really miss it. I vow to get another one someday, thats for sure!

When I started sessions for my upcoming Slide Guitar Summit album, I was fortunate enough to do the first session with Johnny Winter. We immediately started talking about the old days, Son House, Tampa Red, me seeing Johnny at Woodstock, and of course we talked guitars, and specifically his love for his Firebird! He made it very clear to me that he loved it first and foremost for its sound, as well as its playability for slide. I got a chance to hold it, and saw that he had very heavy strings on it, and it was setup with nice high action specifically for slide! Since we were playing in open D tuning, I sure was glad I brought a guitar with equally high action and heavy strings, so I could utilize my Les Paul goldtop 57 VOS, a guitar that is of an unreal level of quality! Once we started recording and trading off on slide guitar, I immediately knew that Johnny was in his comfort zone, and we both fell into a great groove when it came to trading off on our licks! This also served to even further re-awaken my desire for a Firebird, as it just sounded so incredible in Mr. Winters very capable hands! I still miss my beloved Firebird III, and still kick myself daily for not buying another red V or VII I had found in a music shop some 30 years ago! Yes, $1000 was a lot at the time, but you can just imagine what it would be worth right now!

The thing about Firebirds is that like most truly classic guitars, they evoke a kind of feeling, a kind of playing even and theres a certain kind of romantic quality to them that makes them truly singular. I think its a combination of the look and just how much it actually sounds the way it looks! Thats a hard thing for a guitar to consistently do, but these masterpieces manage to do just that! The sleek design seems to perfectly match the sleek sound of those unique mini-humbuckers, and the neck thru the body construction also gives the guitar a kind of stability that is immediately noticeable when you pick it up. One thing that always impressed me as well is the use of the 6-inline tuning pegs, and that unique and very cool headstock. It helps the sustain of the instrument, and of course is once again a very nice aesthetic continuation of the design of this guitar. The banjo style tuners that sort of hide behind the headstock are also a nice touch, and they also help in keeping a minimalist, incredibly smooth design for the instrument.

As far as those mini humbuckers are concerned, every time I started to have custom guitars made for me, going back to the early 80s, I always wanted them to have at least one mini-bucker, a la, the Firebird. I always had a feeling that the clear, clean tone and nice sustain of that pickup was really my ideal tone. A kind of sound that seemed to bridge and blend all of my favorite pickup sounds into one sleek-sounding and sleek-looking piece! 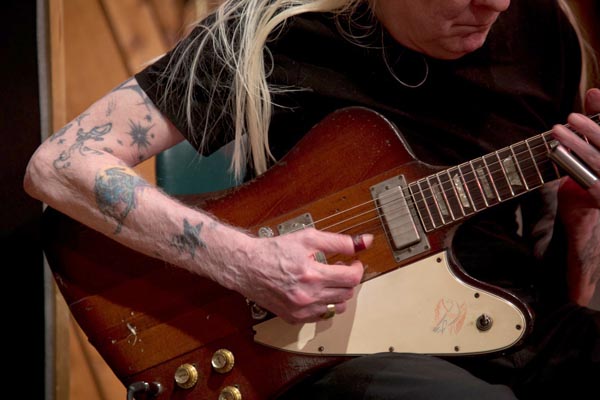 The style really speaks of the early 60s modern designs, and it reminds me of some of the Bauhaus furniture designs of the time. This was an era when European and especially Danish stylists of this school were coming up with far-reaching and hugely influential designs that included everything from chairs and tables to automobile dashboards and of course, guitars! I can imagine sitting in one of those classic Eames chairs while holding a reverse Firebird, and just blending right in! The majority always seemed to be in sunburst, but custom colors look absolutely fabulous on this guitar as well, and seem to even further accentuate the modern lines of this classic guitar!

It was such a pleasure to play and record with Johnny Winter earlier this month for my Slide Guitar Summit album project, and it only served to whet my appetite for yet another Firebird to own! Johnny and Firebirds just go hand in hand, (I suppose like a Firebird in hand!) and it has a great balance and cutaway design that really lends itself so well to slide playing as well as high up the neck lead guitar playing. Again, as I pointed out before, along with the ES line of guitars, Gibson was able to create yet another classic style of guitar with the Firebird that will surely endure another 50 years with absolutely no problem!

Awesome! I love my Firebird and, whilst I've abandoned mini-humbuckers for P90s, the tones it produces. My #1 from the day I got it!

May switch back to (3) mini-hums one day but, if I do, it'll be proper vintage-style Firebird pickups rather than the new ceramic nonsense.

tolm said:
Awesome! I love my Firebird and, whilst I've abandoned mini-humbuckers for P90s, the tones it produces. My #1 from the day I got it!

May switch back to (3) mini-hums one day but, if I do, it'll be proper vintage-style Firebird pickups rather than the new ceramic nonsense.
Click to expand...

Oh, alright then ... been posted a few times before but here she again: 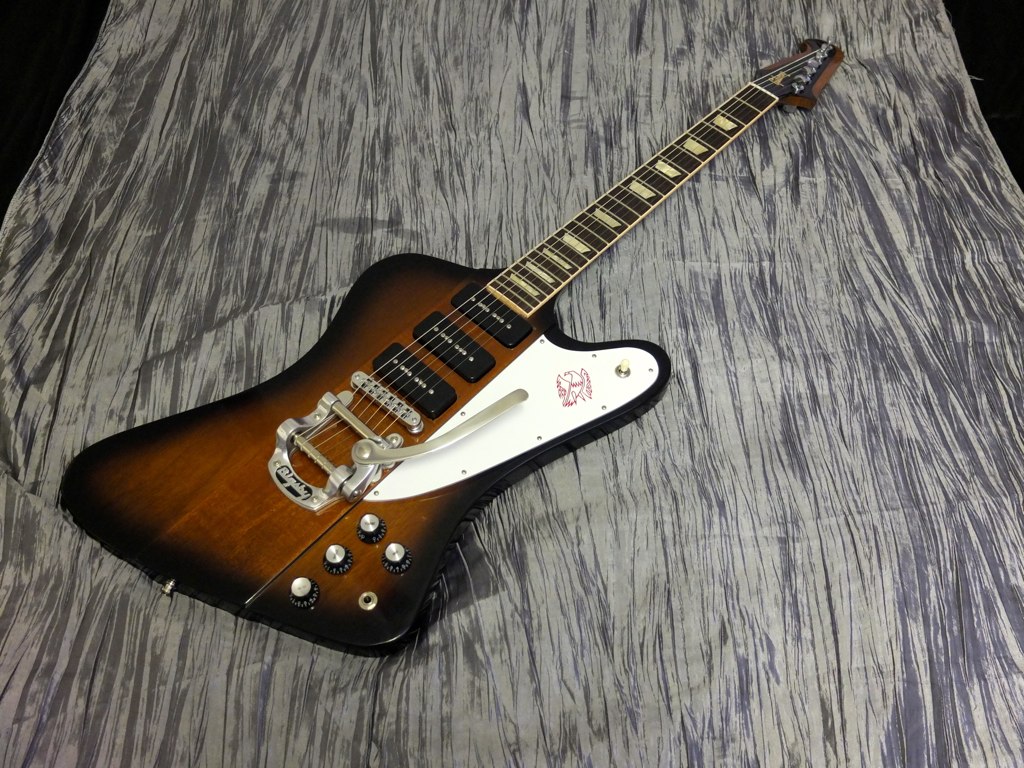 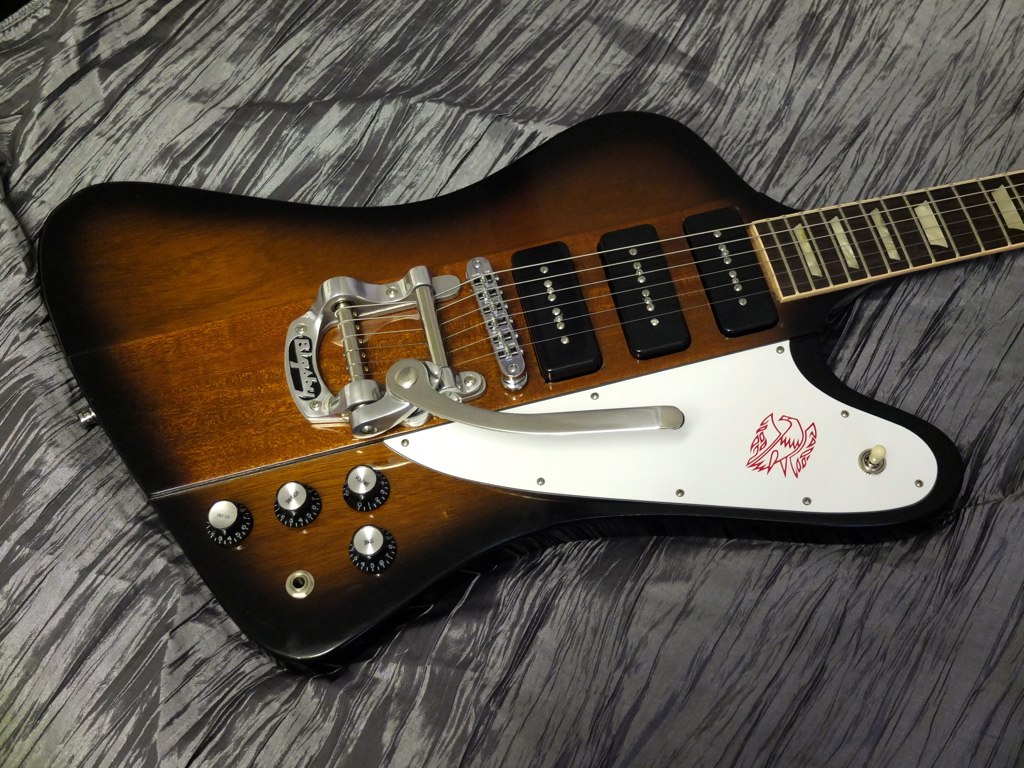 Newer shot with the family: 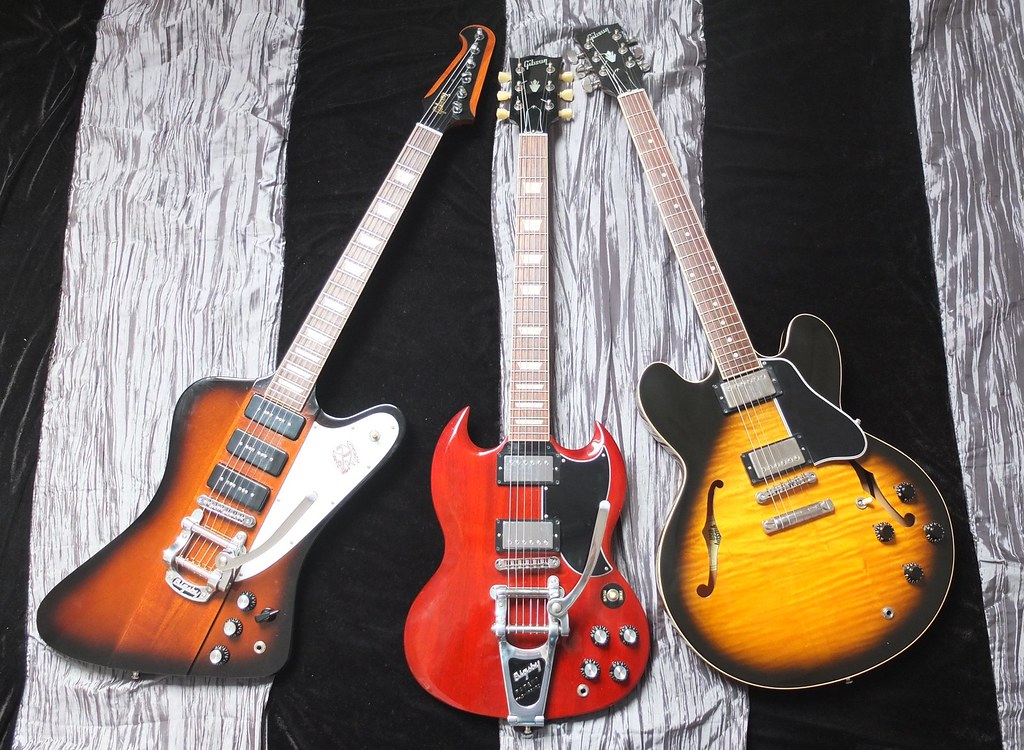 You can see I've changed the tone knob to a chicken-head now, which I much prefer. It's also sans-Bigsby at the moment and I kinda like the non-trem feel but I'm sure it'll end up back on there at some point.

Its a shame that Arlen doesn't work at Gibson so that maybe they could have produced a more fitting instrument to commemorate its 50th birthday than a gilded USA level model. BTW, your link doesn't connect to the 50th bird page.

tolm said:
Oh, alright then ... been posted a few times before but here she again:

Newer shot with the family:

You can see I've changed the tone knob to a chicken-head now, which I much prefer. It's also sans-Bigsby at the moment and I kinda like the non-trem feel but I'm sure it'll end up back on there at some point.
Click to expand...

That's a bad ass looking guitar!!! The other two are really nice as well! Love the bigsbys!

Thanks for posting the pixs!


George Jetson said:
Its a shame that Arlen doesn't work at Gibson so that maybe they could have produced a more fitting instrument to commemorate its 50th birthday than a gilded USA level model. BTW, your link doesn't connect to the 50th bird page.

I noticed that yesterday. Thanks for fixing it!

Gibson should double check their articles, I just cut an pasted it.

OBX351 said:
That's a bad ass looking guitar!!! The other two are really nice as well! Love the bigsbys!

Cheers! I love P90s ... Need to get an LP Junior to complete the set and round out my P90-to-humbuckers ratio!!
L

I'm a big fan of Firebirds, I've wanted one forever, and now I finally have two:

Thanks for a great read, sir... it's good to let people know about Firebirds. I am seeing a lot more interest in the model lately! I can't see why not... what a unique and great design. Like you say, they look in motion standing still.

I do have to switch out these pickups, though. Not the P90s, but the ceramic ones.

Too bad they went with ceramic magnets, instead of alnico in the 50th anniversary model. It does still looks real pretty in Gold and black.

good article...I love Firebirds. Arlen Roth does go on about himself though

SG John said:
Too bad they went with ceramic magnets, instead of alnico in the 50th anniversary model. It does still looks real pretty in Gold and black.
Click to expand...

This is a pretty common instant mod even with the custom shop level guitars. I've had my polar white bird since 2009 and it took me about two weeks before I had to swap out the pups for these: There are also more expensive ones from the usual boutique suspects, but these give a really nice bite without the strident thin tone of the old "original" ceramic minihums. I can't find a definitive date when Gibson transitioned from the Alnico to ceramic pups, but it seems like it was sometime in the 90's.

There are many fans out there of those ceramic pups they made for a while, but it seems that everything they want to slap in a bird lately is described as high gain. I haven't auditioned the new blade minihum ceramic pups that they started loading them with a year ago, but I haven't seen any rave reviews for 'em either.

Lots of adoration here for Clapton's bird, here's some rare footage of Gary Moore killing it with his Firebird V on "Oh Pretty Woman":

and publicity shot during his BBM days: Where to get two-color Firebird V Pickguard?