Guys, I need some advice here.

So I'm building a carved top, set neck bass for a buddy of mine. Its a 32" scale 8 string. The neck is flatsawn mahogany but I put stiffening rods in it.

I set the neck last week. Up until that point things had been going really well. So I set about doing the fretwork and initial setup before shipping it to him (he is going to finish it himself). The neck was dead flat so I leveled and crowned the frets and then strung it up. The neck bowed a lot under tension, more than I've ever seen a neck move with initial string up. More than the long scale bass I did.

I found that odd but I figured hey, thats what the truss rod is for. Over the past week I have been tightening it a 1/4 to 1/2 turn a day but the neck would not straighten out. It got better but still more relief than is acceptable. Today I figured I'd give it one last turn and the the truss rod either snapped or the head stripped. Either way the rod is now useless and the neck is still bowed to hell. To the point that its unplayable with medium action.

What can I do? I used fuckin titebond 3 to set the neck. Is the whole damn thing firewood? Any ideas what the issues with the neck might have been? I've used flatsawn wood for guitar necks before, they're not as stable but I've never had any issues like this. 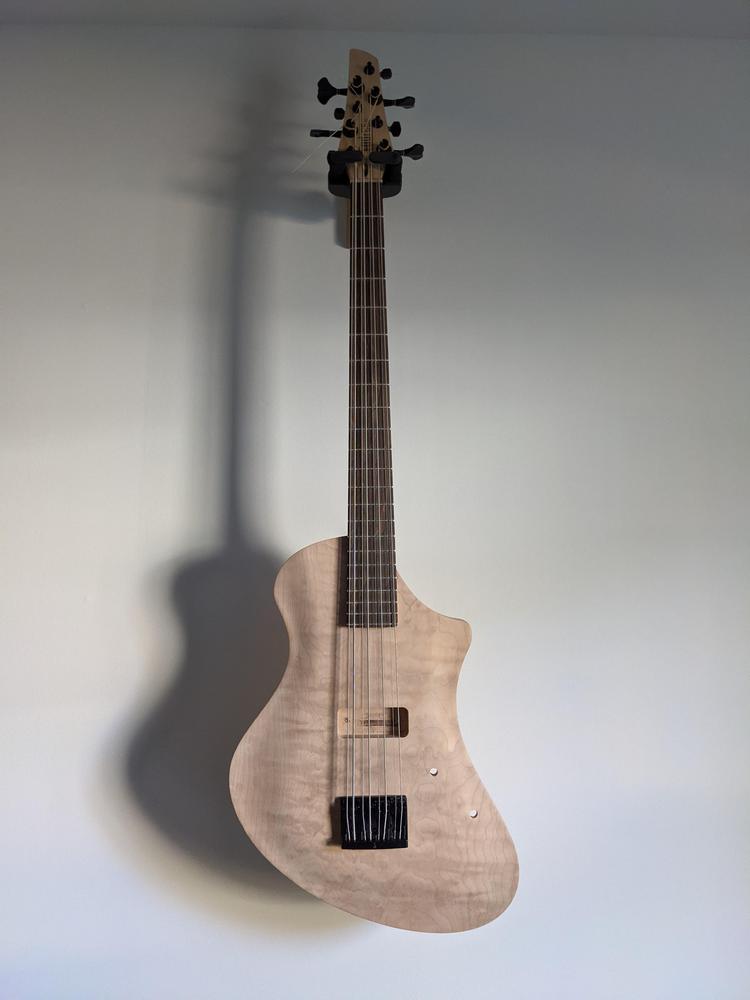 I’m probably talking out of my ass here, but I probably would have used a multi-piece neck for a bass, at the very least, especially for 8 strings. I experienced a similar problem with my very first build, which was a Flying V. It was also mahogany, but don’t recall how it was sawn. It was SUPER flexible, but also didn’t realize it until it was glued up, too. The guitar isn’t very playable, but you could easily use the neck as a tremolo. Isn’t TB3 less stiff than Original? I’d say heat it up and remove. That bass is too nice to discard. I’m sure it’s fixable.

Titebond 3 will release with heat, I’ve had to do it once. The guitar isn’t firewood but you have a not so fun job ahead of you, unfortunately. Put on a good audio book and carefully heat the fretboard off!

I detected your problem before I finished reading. "flatsawn mahogany neck" and "8 string bass" are mutually exclusive.

Rip that neck out and put in a quartersawn hard rock maple neck. THAT is your answer, though I know you don't want to hear it.

How many 8 string commercially made basses have you ever seen with mahogany necks? Personally I know of none.

Mahogany is quite adequate for some instruments but not an 8 string bass. IN MY OPINION.

^ I would have echoed the above.....just from a logical perspective.

I looked at this thread before any replies and immediately thought 'wrong neck construction'.....but I did want to have others' who were more knowledgeable than myself on the specifics of bass (let alone twice as many strings as normal) to chime in first.

I never advocate for CF rods in guitars......too stiff for the tones most of the guitars I am trying for. But in this case I'd be going 3 piece neck with alternating grain pattern, stiffening rods for sure, and a solid/strong 2 way trussrod design.

Come to think of it, I have a multi piece flamed maple bass neck blank sitting in my pieces and parts stash, which I made years ago for a customer who lost interest. Two truss rod slots, 11 degree angled headstock, wide enough for a 5 string or maybe even a 6 string bass. And some of the nicest flame going. I should do something with that. Like make a bass.

I would agree with what the others above me have said, and suggest steaming off the neck and replacing it with a multi ply laminate neck. I don’t think flat sawn mahogany can take the tension generated by 8 bass strings. IIRC, a tuned 4 string bass is under 150-200 lbs of force from the strings so I can’t imagine how much strain 8 strings would put on a piece of wood. In any case, I wish you the best of luck with your build, I think the design looks really great!
V

Flat sawn mahogany has too much flex and doesn't get used for neck builds as far as I know, I wouldn't use it personally

Yeah I know but my buddy really wanted the piece of mahogany and I thought the rods would be enough.

Neck has been removed without too much damage to the body. Gonna reroute the neck pocket and try again

Well, glad the issue is going to somewhat be resolved. Hope the 'buddy' is going to compensate you for time/effort spent on something that was really his request rather than a builder's choice.

Flatsawn mahogany is OK for a standard guitar. Quartersawn is better, of course. The truss rod WILL be effective. Unlike some hard rock maple quartersawn necks I've seen where the truss rod basically was ineffective because the neck was too stiff for the truss rod to affect it.
Last edited: Feb 1, 2021

Depending on the actual piece of mahogany used, and the size/shape of your stiffening rods, and whether they were epoxied in vs glued in, you might have been able to get away with it.

The real issue here is using the rod to move the neck. Rods aren't designed to move necks. The proper procedure is to bend the neck using other means, and then snug up the rod to hold it there.

Shame - as a huge fan of 32" eight-string basses, I'm hoping this story has a happy ending!
You must log in or register to reply here.

T
Guitar without strings - should I loosen truss rod?