Well, I'm not quite in the "league" that some of you guys are in with your Gretsches but I have an LTD 5120 that I love. It was the first year they re-released the Electomatics and I think they introduced less than 300 at NAMM a few years back. I got mine from our local dealer and it plays and sounds great. The Gretschbuckers leave a lot to be desired but I just don't have the scratch to drop on some TV's right now. I will at some point.

I have a 6120GA Golden Anniversary, just like this one.
Gretsch Electric Guitars | Martin Music

It has agorophobia and won't leave the house.

I love the pea soup green color.....dunno what it is about Gretsch....but with their tradional models....any color looks good no matter how tacky, it just works. The only model I'm not big fan of is the vette..

Those White Falcons give me the tinglings of GAS pains.

On The Road Less Traveled

I'm replacing the HiLos with TV Jones PowerTrons. Want to make it a real growler. and a wallpaper I made:

I have been wanting to try that guitar out ,but no stores ever have it.How do you like it?Do you have any videos with it?Any pros or cons on the guitar you'd like to share?

Heres my 04 ssu6120 ....I love it ....I can let it rip on her or I can finger pick ....if your interested here is some Gretsch fingerpicking on my myspace page Bernie Mitchell on MySpace Music - Free Streaming MP3s, Pictures & Music Downloads
Some VERY nice Gretsches in this thread

My personal opinion. There is no better sounding guitar on Earth then a White Falcon with TV Jones classics.

Here's our local 'young Gretsch-slinger', Craig Straubinger, known around St. Louis as 'Craig Daddy'. If anyone gets to town, and can catch his band, The Tripdaddys, I recommend it highly! Stand away from the stage, though, as Craig gets wound up and runs full-tilt off the stage hitting the floor, rolling with his NICE Gretsch 6120 Brian Setzer model! 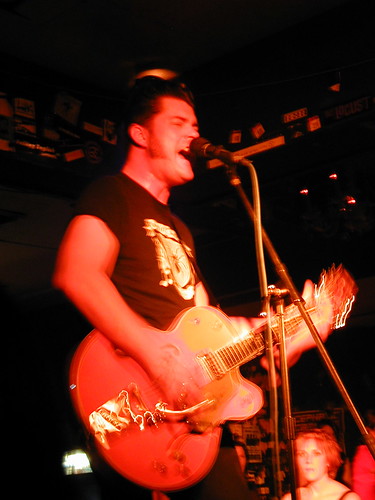 Vintage_Burster said:
My personal opinion. There is no better sounding guitar than a Gretsch....
Click to expand...

....through a cranked Fender Bassman!!!

also had a 1962 nashville and a 50th ann one in that cadillac green, but never really played them sooooooo.......buh-bye!

Bumping this thread after 11+ years for some fresh Gretsch pics!

Since Gretsch guitars are too cool not to share, I will help resurrect this thread 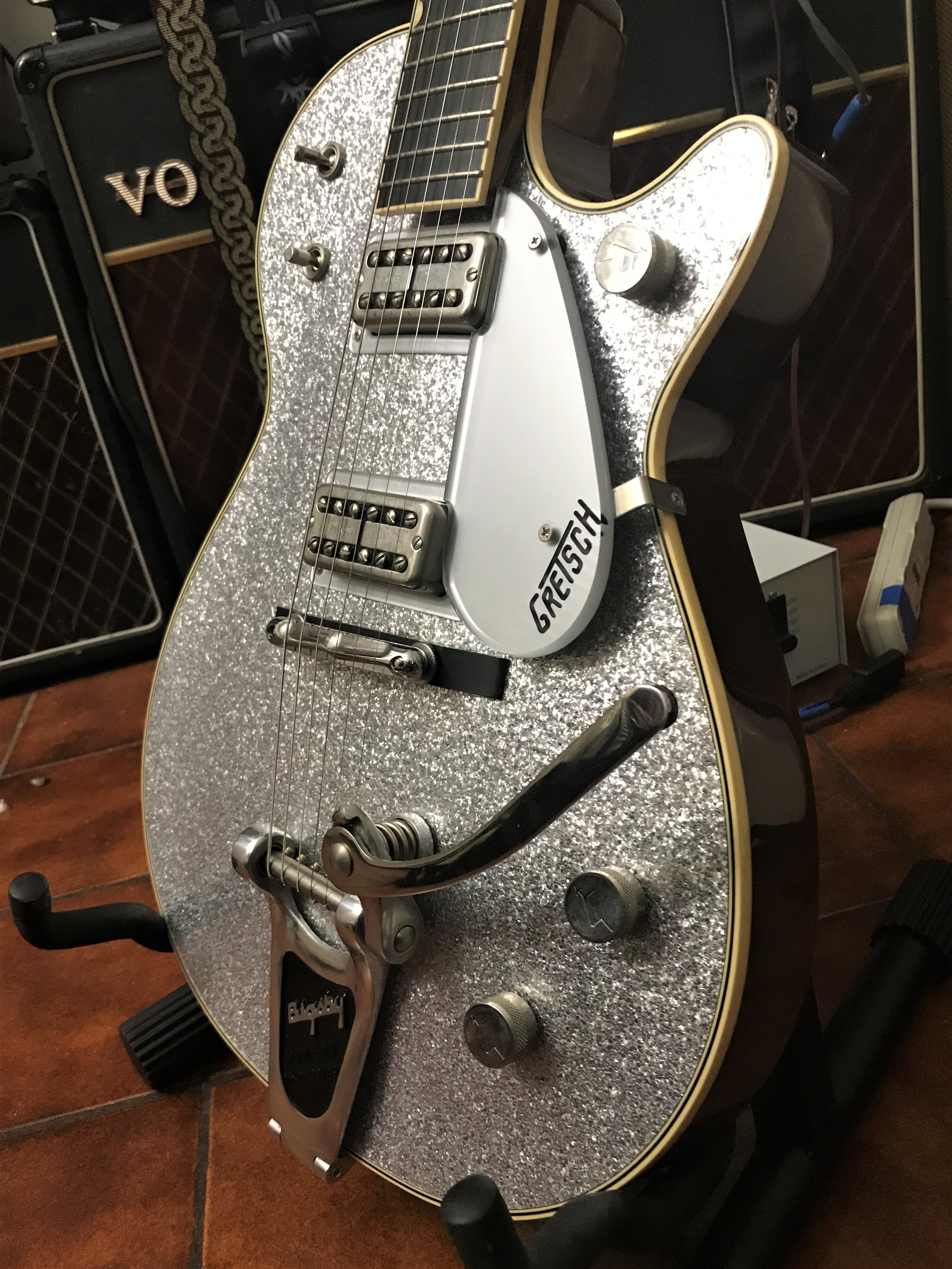 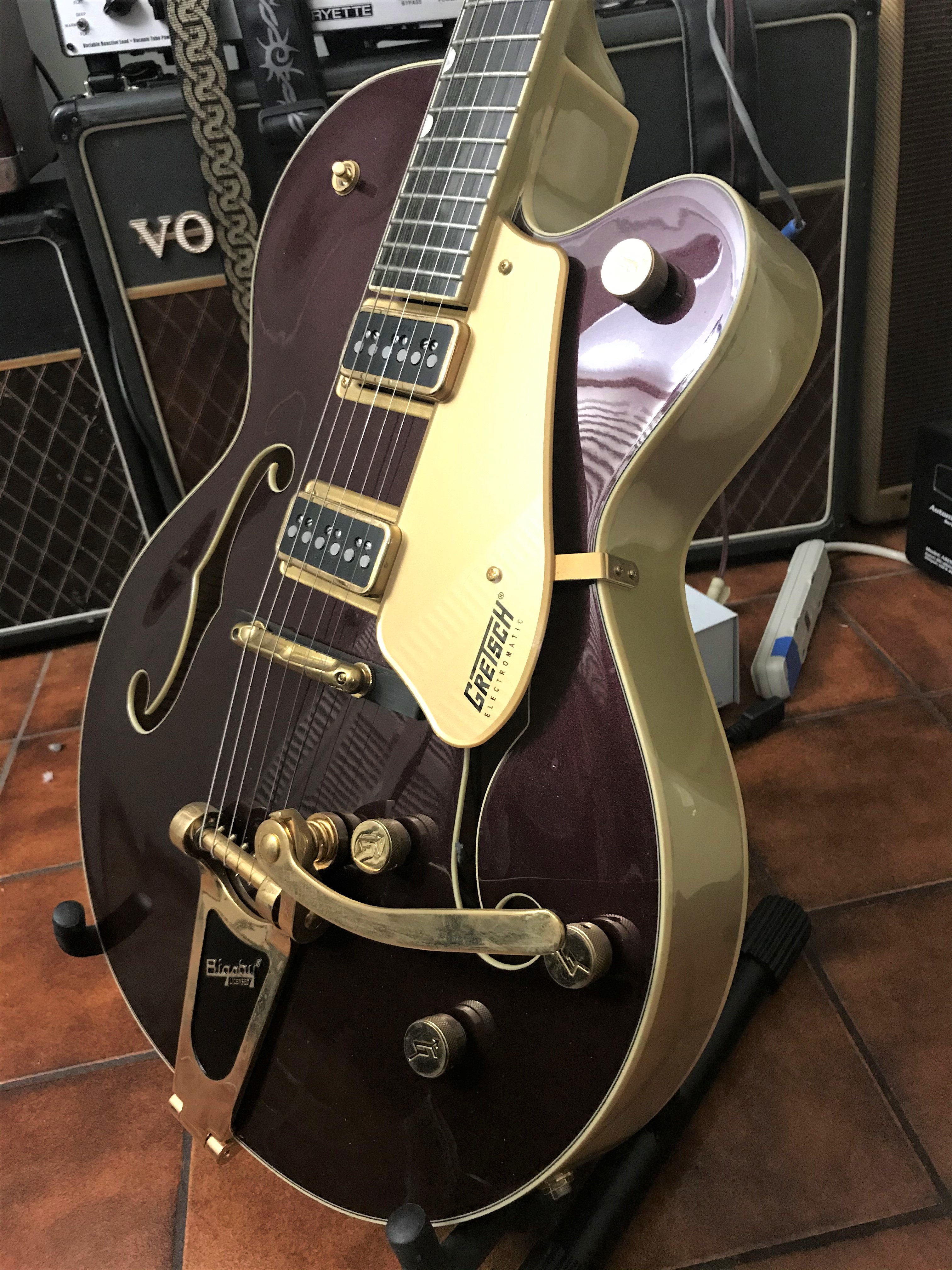 Love them both. Nothing else looks as cool or sounds like a good Gretsch!

Here is my 1968 Streamliner, lovely guitar and in good condition for 52 years old! Tons of mojo and does THAT sound so incredibly well, I love it.

Pics or did not happen!

I have two Electromatic Jets. A goldtop Pro Jet (G5438) that does Filter'Trons on the cheap (Blacktops), and a cherry Special Jet (G5255) that does Dyna-Sonics on the cheap (DeArmond 2000s). Common theme? I'm a cheap bastid.

I've had the Special Jet for several years now, but I just bought the Pro Jet last week. Both models are discontinued.

Have a rockin' holiday! And my long gone White Falcon Removed the black paint from the bottom of the knobs.

NotScott said:
Since Gretsch guitars are too cool not to share, I will help resurrect this thread

Love them both. Nothing else looks as cool or sounds like a good Gretsch!

How does the sparkle feel and play? Fit and finish? I've never really been into Gretsch before but man, that guitar is speaking to me.

Nintari said:
How does the sparkle feel and play? Fit and finish? I've never really been into Gretsch before but man, that guitar is speaking to me.
Click to expand...

Thanks. This Jet is the Vintage Select series, so it is built like the original, vintage models. There are only really two drawbacks with the vintage Jets:

1) The neck heel and setting is very chunky and makes playing anything past the 16th fret a bit more of a challenge than a Les Paul, as seen here. The body binding ends at the 16th fret position. 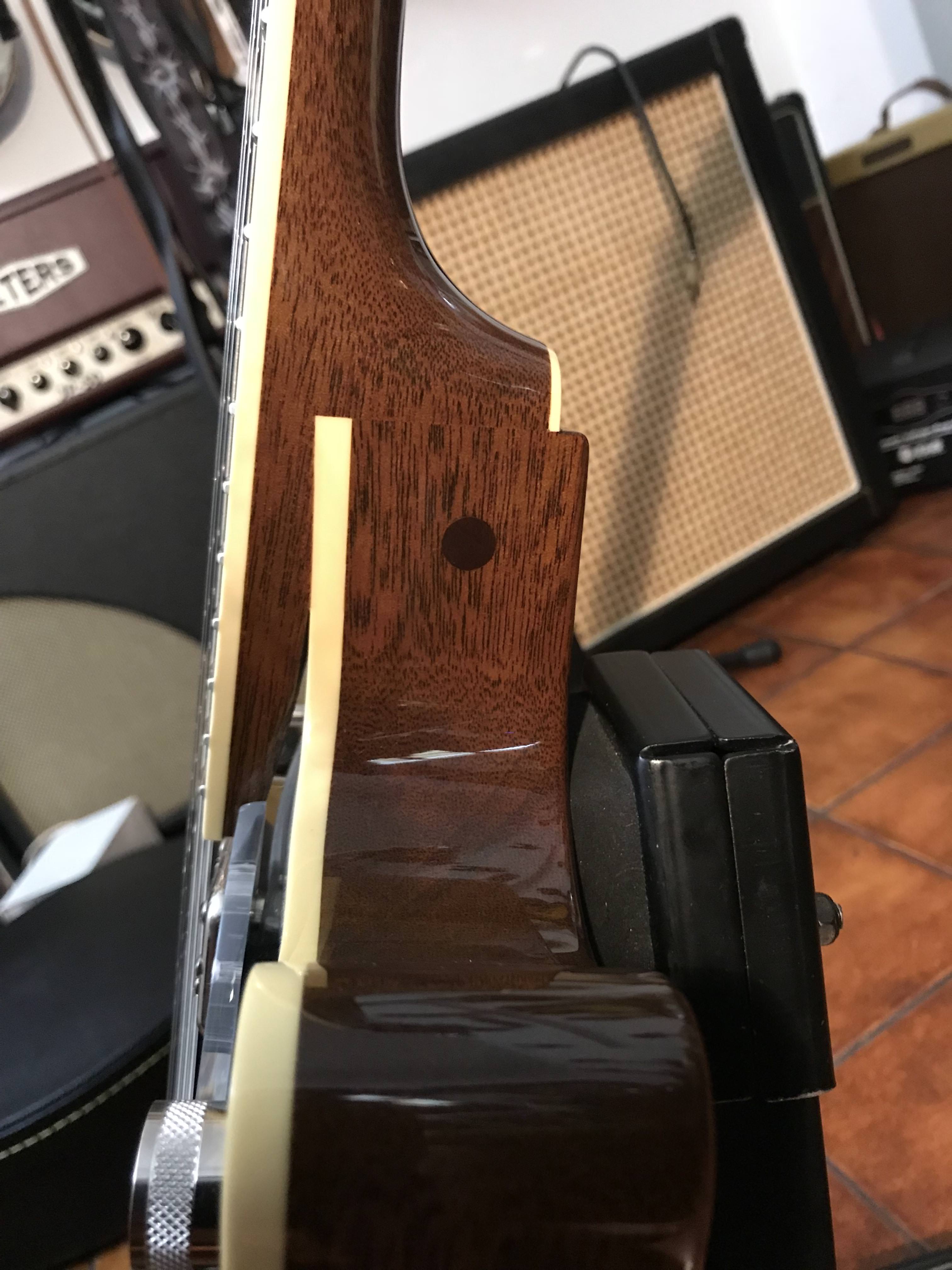 2) The vintage spec uses the floating bridge assembly which results in a more percussive tone than Les Pauls with bridge posts mounted directly to the body, so don't expect the same smooth, singing, sustaining quality of high notes that you expect with a Les Paul. Also, this particular guitar came with Gretsch's Space Control bridge which is basically a piece of threaded rod with (6) thumbwheels for the strings. Those bridges rattle and rob sustain and high frequencies. I use Tru-Arc bar bridges for all my Gretsch guitars and they make a big difference in tone, sustain and tuning stability.

Both of these issues are corrected on the Player's Edition models, which have a much sleeker neck set and bridge posts mounted directly to the top with an ABR type bridge. However, the Player Editions don't come with TV Jones pickups and one of the best sounding treble bleed circuits I have ever heard.

Other details about Jet specs from this era are:

1) Slim profile neck. It feels like a slightly thinner 60s Les Paul neck. I am a fan of big, 50s profiles but this profile is very comfortable and took no time at all for me to bond with.
2) Controls on mine are a Master Volume on the upper bout with treble bleed - Neck and bridge volumes on lower bout without any treble bleed.
3) A 3-way tone switch with positions for a slight treble roll off, heavy treble roll off (affectionately known as the mud switch) and totally out of circuit. Totally out gives you that classic Gretsch jangle. The slight roll off will turn it into a reasonable PAF sound. The mud position is typically unusable but on the VS series, they eased up on it a bit and it is not so bad any longer, think slightly darker "woman tone."

Here is a brief clip I did when I first got the guitar. This is through a cranked Peavey Classic 20 which doesn't really do clean but you can hear that Gretsch/TV Jones clarity and some PAF honk when you kick it:

https://soundcloud.com/notscott-491096254%2Fgretsch
As for fit and finish, only the VS series gets the yellowed binding which I think looks great against the sparkle silver finish. The rest of the guitar was flawless when it arrived. The nut was cut perfectly and the frets were finished so well I was able to set it up at any action I liked with not even a hint of buzz or rattle. Starting with those old Ibanez lawsuit guitars from 40 years ago, Japan has been making some fine guitars. I would put this Gretsch craftsmanship up against any of my Historics or Fender Custom Shops.
You must log in or register to reply here.
Share:
Facebook Twitter Reddit Pinterest Tumblr WhatsApp Email Link