I received a set of Gotoh Vintage Locking Kluson style tuners to put on my '90 Standard. I'm having an odd issue with them. The seller has offered to refund me but I'm hoping it doesn't have to come come to that.

I installed them and went to string up. When I was stretching my strings I noticed the low E and A strings were detuning an abnormal amount and I couldn't get them up to pitch in a stable way. I watched the post while I was stretching the strings and I could see that the post was turning when I yanked on the string to stretch it... basically unwinding. It was just the post turning backwards, not the tuning key. At first I though it was just taking up slack in the locking mechanism and would eventually stabilize but I would get stuck in a never ending loop of tuning, stretching, tuning, stretching. I wanted to see how long I could pull on the string and have the post unwind and it seems to be endless... I actually ended up breaking the string. I put a coin in the top of the post and tightened the locking mechanism down as hard as I felt comfortable doing to make sure there was no slack in there but it made no difference... considering the way these tuners work, I shouldn't really need to do that anyway and from my description you can see that that isn't the issue anyway... it's not "locking slack."

I've done a search and I know many here own these and I was wondering if anyone else has experienced this? I found a user on another forum who had more than one set of these and was experiencing this exact same thing... he said it eventually went away after a few days and hasn't done it since. Here's the link. Exact same thing and, like him, it's pretty much on the low E and A... the higher the string, the less it seems to be an issue.

Hi - hope you don't mind me Zombifying this thread.

YES - I have the exact same problem since installing them (over a year ago) on my Les Paul. I trust all things Gotoh, so when my LP started to fall out of tune seemingly for no reason, the last thing I imagined was the (pricey) Gotoh locking machines would be the culprit.

I thought the bridge was loose, maybe even structural failure of the guitar. Then one night I discovered the EXACT same thing you did - I pulled mightily on an already stretched wound string and I could SEE the tuner slip. OMG. Since then, I've been searching the internets to see if anyone had the same problem.

What I did find on one forum is that the model we really want is the "Rock Solid" version - the SD510's and NOT the SD90's which is what I think I have. Gotoh's "Rock Solid" technology apparently solves this - yes it's actually called Rock Solid. I'm miffed that anyone would sell a tuner knowing it would slip (SD90's) - even if the original Kluson's had this issue. Anyway, it has me considering another brand but I haven't pulled the trigger on swapping them out yet.

What's worse, is that I have a set of SD90's (or whatever the inline 6 is) on my Tele Deluxe. The problem here is that the strings SNAP at the point of locking unless I put a single 'cusion' wrap on before the lock, defeating the purpose of a locking tuner. So forget behind the nut Tele bends I blame this more on the Magnum Lock design than the tuner gearing itself. The next to be replaced for sure, but with what?

Thanks for posting that. I got seriously into a couple of other hobbies and haven't played much in the last 3 or 4 years, so I can't really say if I continued to have the issue. I don't remember the issue still being there the last time I recorded in my studio... but it's possible it was there but sort of under control.
F

Are they the tuners with the slot in the post?

i may be misunderstanding the problem but the posts will still turn after they are "locked". the post does not get locked. only the string gets locked to the post. if the post locked, you would have to unlock it every time you tuned your string. thats not how locking tuners work. they are strictly for quick string changes. if you pull hard enough on the string wont most tuners start to spin?

Well, I don't know about you guys, but I've never in my life had the posts in any other tuners start to back spin (without the keys turning) when stretching new strings or just trying to get them up to pitch. That defeats the purpose of a tuner holding a string in tune. (see my original post)

It's been a while, but I believe they are Gotoh Vintage Locking Tuners SD90-MG. These ones... 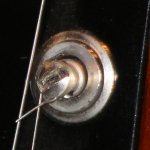 ... but it's nice to finally get some discussion on it 3 years later
F

Oh god jeezuz. I feel I like a dumb ass. Just never look at the date if it's on the front page. Sorry........carry on

Findthetone said:
Oh god jeezuz. I feel I like a dumb ass. Just never look at the date if it's on the front page. Sorry........carry on
Click to expand...

No, it's ok ... like I said, it's nice to finally get some input on this and verification (from intRsoul) that I wasn't crazy (at the time).
T

Well I was about to order these for my les Paul classic but now I'm wary. I have 5 ESP guitars with gotoh locking tuners and I have never experienced this, but it's quite possible those are a higher quality tuner than the SD90s. On the other hand, I can't seem to find any SD510MG's in the vintage kluson style with the greenish keys anywhere on the net. Only the 90's. Hmmmm.

There are some on Allparts for a bit more than what I've found the 90s, but on the allparts page they don't even list them as Gotoh's, I just recognize the "How-to" manual in the photo section as being Gotoh. So who knows if they are 510's or just more expensive 90s.

I have the gotoh locking mg on a tokai love rock for over a year and no problem. I say return them.

I hope I can be of help and that others with this problem find this thread as I did. I think I have solved the problem, at least for me. I have a LP classic plus and put on the locking tuners last year. G used to slip a bit and the other day low E started slipping quite badly. I noticed as I see others have, that the post turns when you tug on the string! I first thought I had the tonepro kulson version and looked them up and found people saying they were no good and go for the Gotoh version instead, but when I double checked I had in fact got the Gotoh's - I must have intended getting the tonepros and then changed my mind and forgotten! Anyway I have the Gotoh 90's. I have had a play and the strings that slip just happen to have the strings coming out of the hole at 90 degrees to the nut. This allows the string to act as a leaver and over powers the worm gear. I remembered how, when I used to fitt roller shutters, we would put a few extra lathes on electric shutter curtains, this stopped the worm gear in them from being overpowered by an intruder if he tried to lift the shutter up with brute force. The extra laths altered the angle that the curtain came off the roller. Adjusting the strings so that there is say, a quarter of a turn of string on the post has stopped the problem. I have tugged and yanked the strings and bashed a few tunes out and the strings are now staying in *PERFECT TUNE*. I know someone said that it is defeating the point putting turnes on, but I am not talking about putting turns on to bind the string in place, just to position the string so that when it is tuned up it is not comming out at 90 degrees to the nut. At 90 degrees it acts as a turning lever on the peg, at angles past this the preasure is instead a pulling preasure on the peg which is OK and doesn'r seem to turn the peg. It must be worth yuo giving this a go as it has worked for me.
You must log in or register to reply here.

How to re-string with grover locking tuners?