I'm glad that I have one of these. and one of these...another Bacchus korina. Superb instruments. You got me you clever little rascal! Don' hurt me any more with your cutting wit, you go for the jugular. It isn't even fair. You have broken me, I am a shell of the man I once was with the tongue lashing you gave me.

QUOTE="Bill Hicklin, post: 9180071, member: 98014"]
Well, a lawyer would say something like "The plaintiffs' claim is barred by the doctrine of laches as well as estoppel," but that's just the polite way of saying the same thing.


No Bil, that is the educated and intelligent way of saying the same thing.


Busted! Oh, and only teenage girls use 'lol", not grown men. Assuming of course you are a grown man.
Click to expand...

Jeez man. Welcome to the forum.

this thread will go on without you !

and if you take your poor posting style to the other thread......
the same will happen

I would ban him from the forum now.

Since it will happen in 2 weeks anyway talking to people like that.

this thread will go on without you !

and if you take your poor posting style to the other thread......
the same will happen
Click to expand...

Meet the new boss, same as the old boss... 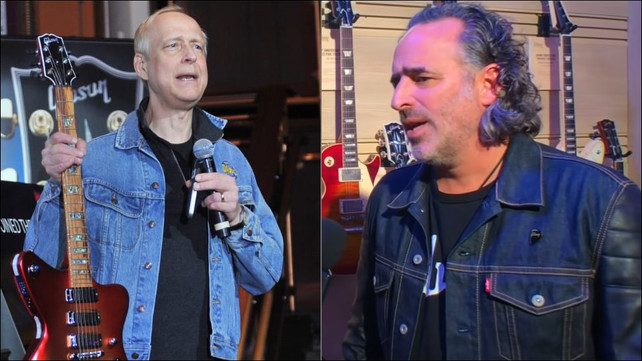 I was hoping Gibson would win so they could put the money into figuring out how to keep their guitars in tune.

oicu812 said:
I have never claimed it would stand up in court. The legal-eze bullshit, is to me, exactly that. The laws, to me, are misguided in certain respects.
Click to expand...

I never claimed that murdering someone would stand up in court, I feel the laws are bullshit. Therefore I should be allowed to murder people.

For me it is hard to respect Gibsons trademark claims as Gibson has pulled the same crap as they accuse others...Gibson/Epiphone Hendrix and the Dreadnought..

Guess the Euros figured out the game on this one.

A Flying V and an Explorer are the only pointy guitars I like. So far I have only an Explorer, but there was a nice off-white Flying V at L&M when I was picking up the Explorer.

As far as the lawsuit(s) by Gibson, I think the Flying V is theirs alone, but they really should have protected it.
Although other manufacturers can call their copy a V, can they call it a Flying V ?

efstop said:
A Flying V and an Explorer are the only pointy guitars I like. So far I have only an Explorer, but there was a nice off-white Flying V at L&M when I was picking up the Explorer.

As far as the lawsuit(s) by Gibson, I think the Flying V is theirs alone, but they really should have protected it.
Although other manufacturers can call their copy a V, can they call it a Flying V ?
Click to expand...

No. "Flying V", as a name, is definitely a Gibson trademark. Brandnames and logos are much, much easier to assert and defend. Same goes with SG, Firebird, ES-335 etc. "Les Paul" also, but indirectly, since the name belongs to Lester Polfuss' estate and Gibson uses it under license.

I guess I don't have to worry about headstock shape on this scratch built "V". fry said:
I actually got disinterested in any “pointy” guitars pretty much after the 80s. I always thought the V looked cool, but only took the plunge and tried one about a year ago. I bought it new, and within five minutes after taking it out of the box, I couldn’t get it back in there fast enough to return it. Goofy and awkward as hell in my opinion.
Click to expand...

That's a fairly typical reaction. It was mine at first as well. It initially just seems so damned awkward. And the folks who didn't buy them in the '50's thought they were goofy looking as well, which is why it was discontinued.

At this point, my old '70s Moonstone has become familiar and comfortable even though it's a "hippie sandwich" style guitar done in fancy woods and gold hardware. My leg has become familiar with it draped over my thigh, but it's been a number of years since I got it, and the Tom Anderson pickups have done well. Mine's a 24-fret guitar with all 24 frets easy to get to, and while I wondered for years why someone would build a guitar like the Les Paul with a clunky neck/body join, just 22 frets and a fuzzy single cutaway shape, I guess you get used to things. If you give them more than five minutes.
D

oicu812 said:
Bill, I have clearly stated several times that my personal point of view is if you come up with the idea it is yours, and yours alone. It should be yours until, as I previously stated, you dispose of it in some fashion I.e. sale, gift, or inheritance.
Click to expand...

For thousands of years, your personal point of view would have bogged down progress in the known world. Not only would inventions have not been shared, but you probably would have spent a lot of your time attempting to enforce that "yours" business. For most of civilization's thousands of years, sharing discoveries and inventions has been done for the common good, and it's worked pretty well.

During the Industrial Revolution some governments deemed it to be in the economic interest to grant termporary monopolies on written works, inventions and brand identification in order to give the folks who "come up with the idea" a financial incentive to bring the idea forward, while allowing that idea to pass to the public domain after that temporary period.

The current system is overburdened and broken. Multi-billion-dollar companies like Disney have extended that "temporary" monopoly (copyright) far beyond reason thanks to their political clout. It isn't just a question of their profiting from their idea; the copyright laws make it impossible for a whole raft of materials that were never intended to be protected by copyright to be use for research, etc. In most cases the authors of these works are deceased, impossible to find, etc.,

Patents are broken in huge numbers of ways, as are trademarks, which were never meant to be extended across broad ranges of products. Adjudicating this mess requires huge expenditures and the real inventors are often swept aside by larger firms with deeper pockets.

Your point of view is untenable.

MikeyTheCat said:
You too? I thought I was alone.
Click to expand...

At least two of us get it!

dspelman said:
Multi-billion-dollar companies like Disney have extended that "temporary" monopoly (copyright) far beyond reason thanks to their political clout.
Click to expand...

As I posted just a couple of days ago, the whole "Disney and the Copyright Act" business is an urban myth. The CA1998 simply brought US law into line with the rest of the world, so that we could join the Berne Convention like every other developed nation. Word Wide Rodent, slimy as they are, had nothing to do with it. And Mickey Mouse will enter the public domain at the end of 2023.

en.wikipedia.org
You must log in or register to reply here.