Hydra19 said:
Yeah, there are too many different stories about good years.
What I'd like is a one piece body and neck, thick neck and nitro finish, the rest doesn't matter too much. So which years had the biggest necks and one piece?
Click to expand...

To hit those specs you want a custom shop. Pretty much a 58 ri in Mahogany not Korina not seem one in a while local Cl had it for 3200 6 years ago. I had a 76 years ago great guitar regret selling it. Recently picked up a 2006 it had been set up for death metal, insanely thick strings down tuned. The dealer slapped .009 on it too a while to get it to settel in. Never as nice as my 76. But PAF clones, aluminum tp and faber abr conversion kit really did much for the guitar.
A

My 1984 Explorer. I bought it new in June 1984. Alder body. Maple neck. The original uncovered Dirty Fingers pickups are long gone. I thought they sounded cool in the 80s but as my tone preferences matured they were replaced with a Duncan JB bridge and a Duncan 59 neck. Push pull volume pots for coil tapping. No load tone pot. It's a beast. I was raving about it to my neighbor so he loaned me his '84 LP Standard w/ EMG's, I had never played an LP before. That was 2000. I ordered a Standard for myself before I gave it back to him. I've been an LP fanatic ever since.

i hate spending more than $2k on a guitar….unless its mind blowing…

anyhow, this is what I’d look into but I’ma les Paul collector…and merely an admirer of explorers…especially allen Collins’ 58
but those are bananas expensive iirc

I've just sold a 2019 Explorer to finance a McCready Aged LP. Fantastic guitar. I had a 2001 as well and it was also stellar.

I also had a 1976 Explorer during the late 80s. One of the ones with a big neck which I did not dig. I took the my 1984 pictured above and the 1976 to a local luthier and had him measure the neck on the 1984 with calipers and shave down the neck of the 1976 to match it. He did a great job. You could not tell the necks apart. Plugged in you could tell the guitars apart in seconds. I'm not a fan of all mahogany bodies with humbucking pickups. Too dark and muffled for me. That alder body on the 1984 just sings. I sold the 1976. If you ever see a real 1976 Explorer with a 60's style neck profile that looks like it has been over sprayed it may be my old guitar. Anybody like the Explorer Pro? I believe it has a slightly smaller body than the normal Explorer.

My first Gibson was an actual 1976 58 RI. At the time, it was just a 8 or 9 yo used guitar. I stupidly traded it in on a gorgeous Les Paul Custom that wasn't half the guitar the Explorer was. I bought a pewter color 1984 style later which was also a much better guitar than that Les Paul Custom was.

I've had a bunch since- the best was actually a Hamer Standard, but for Gibson proper the best one I ever owned (besides that 58 RI) was this 2005 model I got for a great price back when GC would actually deal- It was on sale for memorial day down a couple hundred, and I got another 10% off. They had two and the first one was just OK. This one was amazing. I never played 11s on anything especially in E standard, but this guitar I could go with 11s. 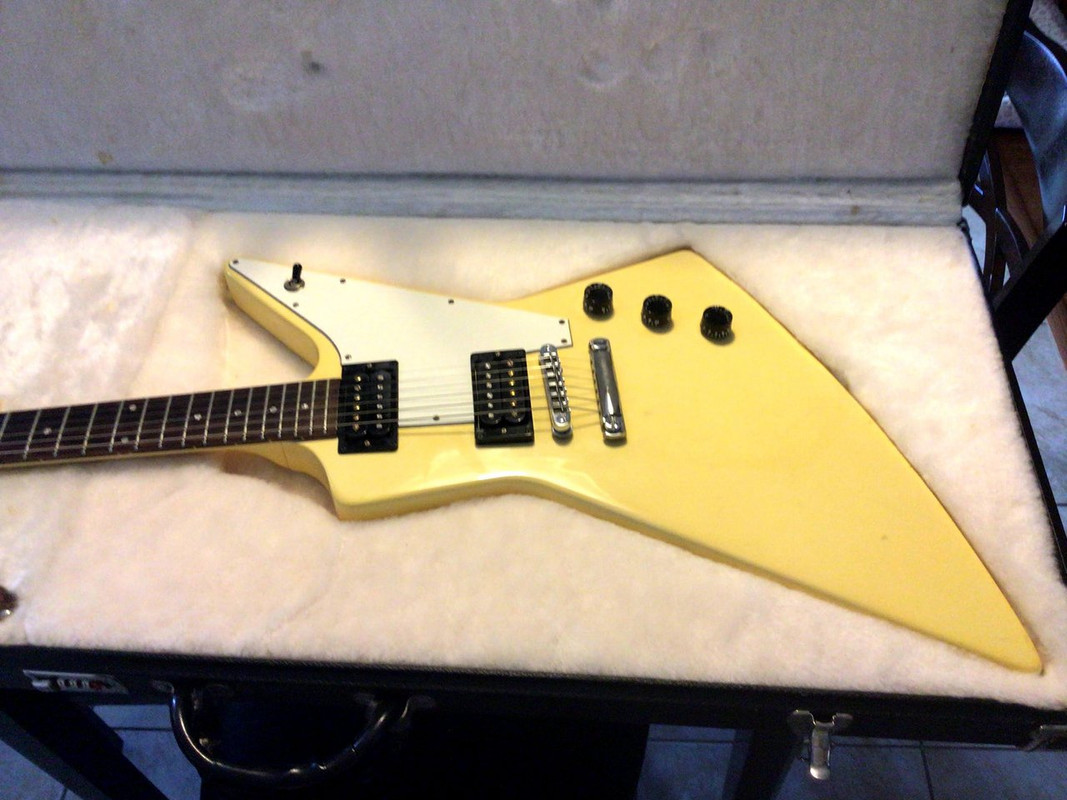 Deftone said:
Anybody like the Explorer Pro? I believe it has a slightly smaller body than the normal Explorer.

The Explorer Pro is a very nice guitar, beautiful binding. The only issue can actually be the size. I think the "90% of a regular explorer" that Gibson claims, has to be applied to each hight and width, so it's actually more like 81% the surface of a regular explorer. I'm relatively tall and unfortunately the Explorer Pro looks way too small on me. So it's a great guitar for smaller men and most ladies.

murmel said:
The Explorer Pro is a very nice guitar, beautiful binding. The only issue can actually be the size. I think the "90% of a regular explorer" that Gibson claims, has to be applied to each hight and width, so it's actually more like 81% the surface of a regular explorer. I'm relatively tall and unfortunately the Explorer Pro looks way too small on me. So it's a great guitar for smaller men and most ladies.
Click to expand...

Interesting. What's relatively tall? I'm 5'11", Not tall but taller than average. The only thing I didn't like about the Explorer and the Dean ML is it seemed too large and slightly cumbersome compared to most guitars.

I’m 186 cm which should convert to 6’1” . I guess for you it’s just tiny bit better, but it will still look somewhat small.
James Hetfield is 185 cm (which also converts to 6’1”) as a reference and a regular size Explorer suits him well.
I‘d say the Pro is more for people below 5’5”.
A 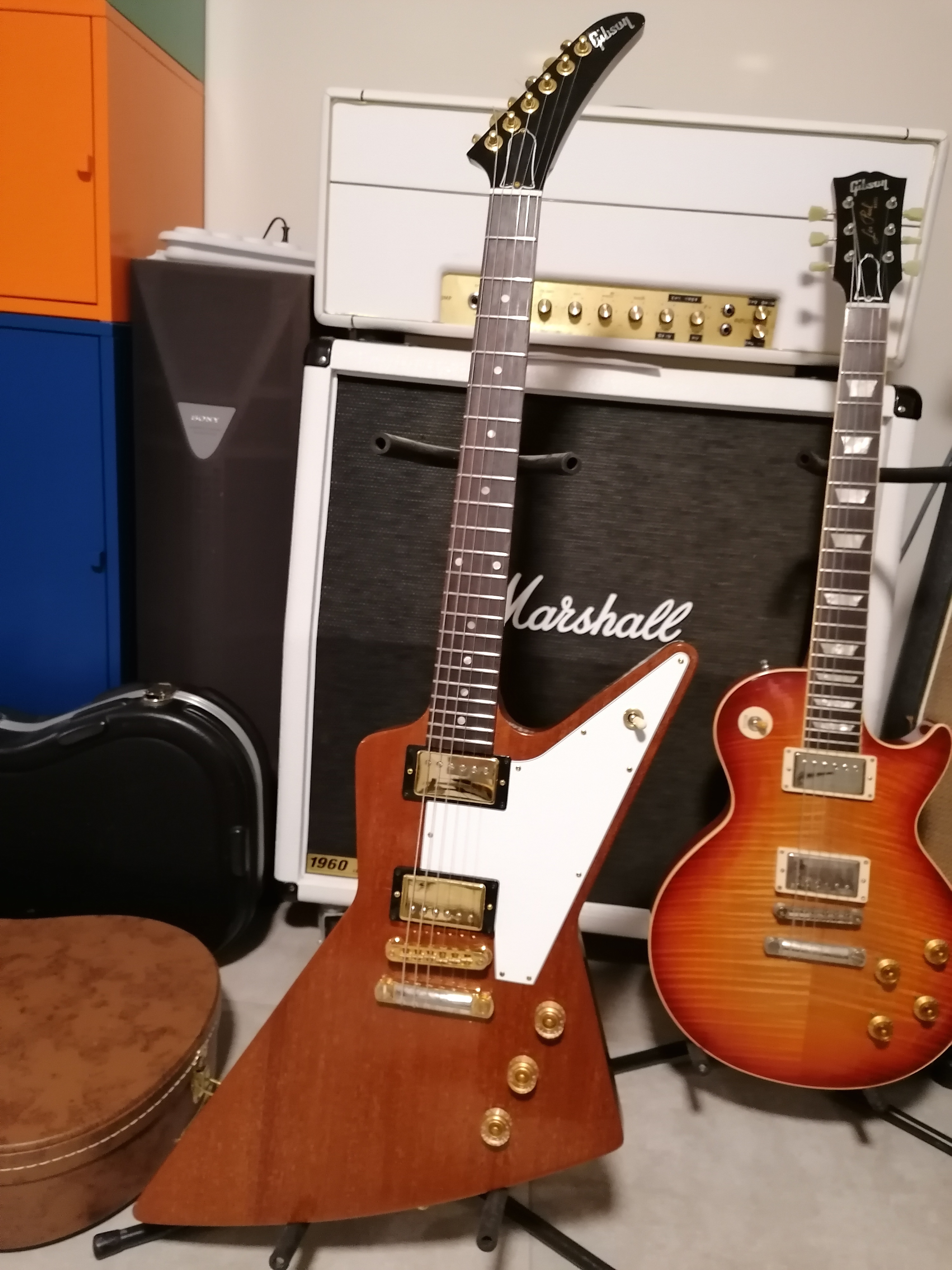 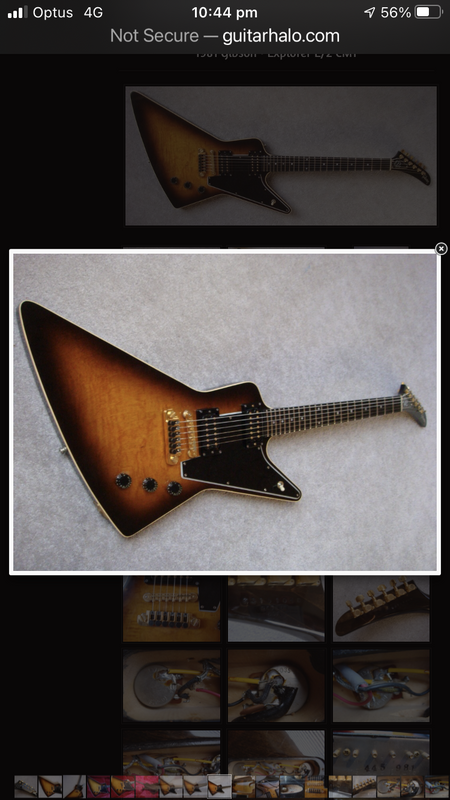 I have the same 1992 model, and it's exactly as yellow as this. This is probably not the original case? I bought mine new back then, and it came with a brown case that has pink interior and a blanket.
You must log in or register to reply here.