I haven't seen a thread on this yet. Or did it get deleted?

What a bizarre case this is. Road trip across the US with her fiancé tuns into a nightmare. Van life ain't all it's cracked up to be.

I have no idea what you're talking about and my give-a-google is busted.

You say Petito... I say Potato

She’s a 22-year-old girl that set off on a road trip with her fiancé back in June. The two of them had an altercation mid August in which the police were involved. It’s all on video, and you can tell but there’s trouble between them. Her family hasn’t heard from her since late August. The fiancé returned home the first of September- alone. Her family finally reported her missing on the 11th. The fiancé clammed up, and lawyered up. Police got a search warrant today to go in, and found him missing. He is now wanted by the FBI. You can tell this is not going to end well.

They got pulled by cops (Aug. 12th) a couple of weeks before her disappearance and the video was released
by the cops in case it brings new elements.
Worthy of a movie.

Apparently he came back with the van but not with Gabby.
Now he's missing... or hiding... or has killed himself?

Been following this since it broke. +1 on it not ending well.

Red flag 1 was when the BF got back, he instantly lawered-up. And, the fact that his family is being extremely uncooperative - not good.

Hope I'm wrong, but we all know how these types of situations go.

Unfortunately, she is buried somewhere in the desert or alike
chance of finding her alive is zero, and finding her remains is slim at best...

I'm so sorry for her families

maybe she broke his les paul and proceeded to attack him.....hmmm, not sure, could be anything that happened...hope she is found though...

That’s messed up, i hope for a good outcome but I think that ship has sailed

Yep another damsel in distress story that never ends well. 
That came out bigger than I anticipated.

Not to hijack the thread, but Patrice O'Neal was one of the funniest guys ever. 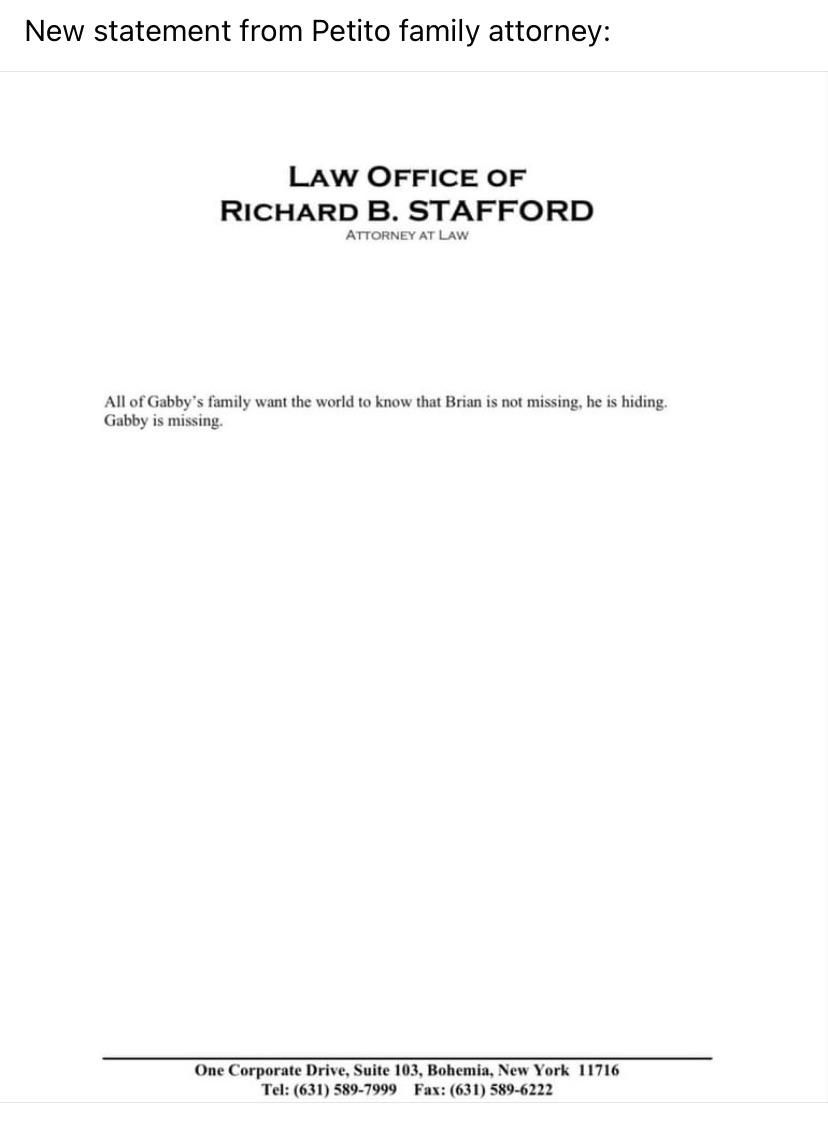 In instances like this where clearly the fiance is a person of interest/suspect, can the police not take the person into custody for questioning immediately?


That came out bigger than I anticipated.
Click to expand...

That's not what she said.

She was pretty hot. Too bad she's dead. We need all the hot girls we can get.

Condolences to her family.

If that muthafucker killed her he needs to die as well but an extremely violent death, nothing pisses me off more than a guy that’s mean or abusive to women. Burn him alive