Just added the black Bonamassa Fuzz Face to my collection of Dunlop Fuzz Faces. Just wanted to share here for anyone who appreciates it. Didn't have a zinc chloride but running the black one on an alkeline battery produced a nice smooth fuzz that cleans up well. It's the tamest fuzz of the bunch. The gainiest is the band of gypsies which is a different circuit. Otherwise the gainest is the blue Hendrix, followed by red germanium and the EJ. The copper one sounds slightly brighter and gainer than the black one, not because my eyes tell me that but I think it's the battery difference. All of them are so much fun to play but above all else they look super cool.

Anyone else here got a fuzz face?

do you run them in series or parallel???

I only like mine with volume and fuzz on "10". Any other setting is underwhelming. Overall, I prefer my Maestro and my Colorsound Clones mixed with my Rangemaster clone. 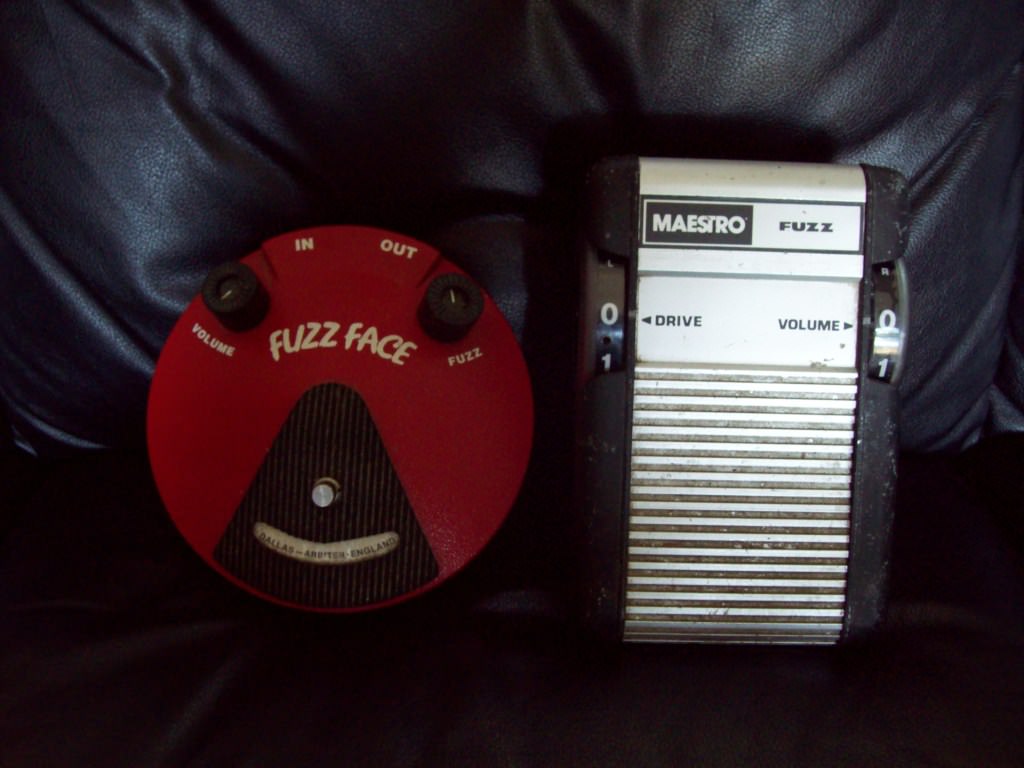 These are great Fuzz's. I have the gold JB one too I got signed at his last show in my area

After near 20 years playing guitar, I just now realized why its called a Fuzz Face...

Thrill said:
After near 20 years playing guitar, I just now realized why its called a Fuzz Face...
Click to expand...

I have the mini in the blue silicon. I really like it....back in the day I had a regular sized red one from the 90s....cool pedal but I sold it when I purged a lot of my gear when needed cash. I have had a Big Muff (I don't use it that much) for the past 15 years but its good to have a Fuzz Face again.

I bought one of the mini blue silicon ones. I love the tone at low volumes, but when I tried to crank it up in the room with the band, it fed back like CRAZY and just didn't cut through the mix. I was disappointed. I never use it now. Maybe I will someday for recording.

I've stayed away from the minis so far but they have some practical features. The blue one isn't available in large size so that's also why I don't have one. There are some nice tones to be had without the knobs full on. Try backing down the gain and volume on the pedal and also adjusting the volume and tone on your guitar, it's suprising what you can find. I like how you can 'play' the pedal and make it loud and thick, thin and crunchy, fat and sputtering all by adjusting playing dynamics or volume control.

I have the black JB one sitting in its box, collecting dust.
I should really try to sell it one of these days, I won’t ever use it again.
There’s nothing wrong with the pedal at all, I just don’t really have a pedalboard anymore.

I've got the Hendrix Mini. Sounds great with a Strat, Super Lead and AB165 Bassman...

which is one of the more obvious comments I've made in awhile.

I started collecting them for the hell of it. None of my heroes play them and I don't own a Strat or a Marshall, but I like them with my LP and Vox.

I played @Tim Fezziwig 's Roger Mayer Mongoose Fuzz. That is a silicon fuzz and the best sounding Fuzz Face I have ever played.

If you are hoping for great sounding fuzz tones at unity volume levels, the Fuzz Face probably isn't going to sound that great.

I have found that with other fuzzes like the Tone Bender or Colorsound, too.

Some of the more modern fuzzes seem to play better in the realm of unity volume, but the old circuits have that mijick when used to push the amp over the cliff.

@lunchbox try the FF with everything dime'd then start with your guitar volume at "0" and ease your way up.

Crotch said:
These are great Fuzz's. I have the gold JB one too I got signed at his last show in my area

How cool is that?!!!! Sweet!
You must log in or register to reply here.

What is the difference between germanium and silicon fuzz?
2