Favorite Amps With A Les Paul For Driven Tone

My lead guitarist and I got our tones dialed through a Kemper at the studio we start recording in next week!

Generic amps, I know. But who would have known that my two favorites combined into one big sound would sound SO GOOD. At first I was just gonna do the Dual Rec both ways.. told the engineer dude I’d like to hear a JCM800. Put them together and sure enough, heavenly sounds

Just curious whether what y’all’s favorite amps are for a high gain/driven tone, whether you own them or not

If probably go with Marshal and Mesa myself.

And this one for Fender drive: And this one for Vox drive:

I have to assume your question was "What is your favorite amp out of the ones you currently own or have owned for driven tones using a Les Paul?".
Last edited: May 9, 2022

Marshall Super Bass 50 whenever possible...or into a clone of the same with a MV....!

For tube amps, the PRS Archon.


Honorable mentions to: Mesa Rectifier with a Tubescreamer, Mark IV, Bogner Uberschall, and 6534.

For digital: Axe FX. Had plenty of positive experiences with the Kemper, though.

"Generic" or otherwise, if it works then it works. In other/more extreme cases, I noticed people can fall into the vicious cycle of trying too hard to follow whatever may be the hyped up equipment for the day. And that's just counterproductive. It’s like Bert and Ernie, Lennon and McCartney, Bonnie and Clyde…they belong together

Marshal DSL40 is my favorite

but I kinda love mini amps….
easily the funniest, best sounding [tiny] amp i own…makes my les paul recording sound like Brian May If I could only keep one of my amps to use for Les Pauls, I would probably keep this one, Carol-Ann Tucana 3r 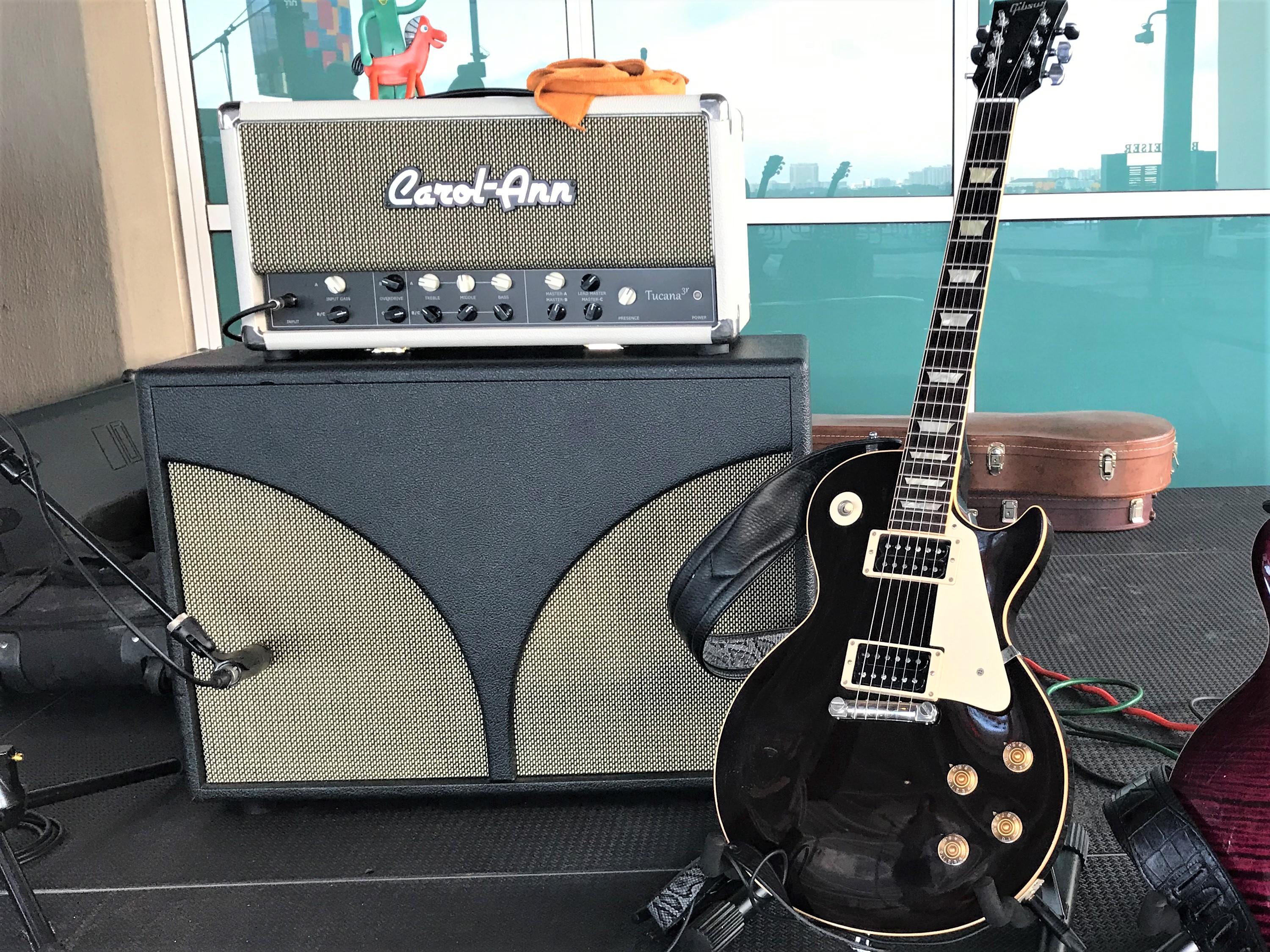 To me, nothing beats a Marshall when it comes to a Les Paul.

I've had a few including a DSL40 combo, a DSL20 head, an Origin 20 head, and a Studio Classic head (JCM 800 20w). Of the 3, the Studio Classic was the best BUT... only at massive volume! At ear bleeding levels it was AMAZING! But I am a bedroom player and having to run it at such a punishing volume all the time to get that illustrious tone just wasn't feasible, so I returned it within my Guitar Center 45-day return window. I have to say though, at that face-melting level it was something to behold indeed!!!!!!

The DSL40 was actually my first Marshall though (I know, I know... it, along with the DSL20 and Origin 20 are Vietnamese-made Marshalls, but they are still Marshalls and dang good!). I got it from Sweetwater with an upgraded 12" Creamback Speaker (it was the original DSL40 which normally came with a Seventy 80 speaker). Ironically, even though it was 40 watts, it was actually more usable at lower volumes. I used it exclusively for a few years as a combo amp before I lucked into a Marshall 1965B 4x10 cab from the 80s (with its original GL10L-35 Celestions). Bypassing the 12" Creamback and running straight into the 4x10 cab was amazing! Shortly thereafter I found a killer deal on a DSL20 head, so I snagged it and started using it most of the time, eventually selling the DSL40 to a buddy of mine. The DSL20, like its 40w sibling, was very usable at bedroom volume, but could still make you ears bleed if necessary.

I ran the DSL20 exclusively then for the next year or so before getting an Origin 20 for Christmas. I liked the Origin but didn't love it. So, I mostly stuck with the DSL20 through that glorious 4x10 cab. But having both heads stacked on top of each other on top of the 4x10 cab looked super cool in my little guitar room!

Meanwhile, my buddy had taken the DSL40 combo I sold him and pulled the guts out of it and made a 40w head out of it, using a head case from Mojotone. It was so cool, and I was immediately jealous and this planted the seed of getting another DSL40 combo and maybe doing the same. But the new version of DSL40 had gone up in price considerably over the original one, so I settled into keeping an eye out locally for a used one. A couple years later though my buddy offered the DSL40 head back to me... so I snagged it (trading him the Origin 20 and some other gear). He also gave me back the original combo cab, but had yanked the Creamback and installed a 12" Greenback instead. He'd also modded a cable to be able to connect it directly to the speaker so I could run both the 4x10 cab AND the 12" Greenback'd combo cab (which was essentially now just a 1x12 cab). The combination of the old 4x10 and that 1x12 is AMAZING!!!!!!!! Like WOW!!!

So... this is now my rig (I painted some drywall repair mesh black and installed it into the hole where the amp unit used to be on the combo cab (for aesthetic reasons) and added a Marshall logo to the Mojotone head case). Whether I run the 4x10 on the bottom (as seen in the pic above) or on top of the 1x12, it's just awesome! Each config presents a slightly different emphasis tone-wise, but both are bloody brilliant!

Marshall for high gain i dig my DSL’s
And dirty clean’rish,,Laney,,,best of both worlds as far as British sounding amps go,IMHO
Laney doesnt get the credit it deserves
I think if more guys gave them a try theyd be surprised and there cabs are top notch
Laney Ironhearts are great gainy amps i love the 15w version
But now days with interweb the choices are endless
Depending on your definition of gain and whether you like the used market or not theres some good deals on some of Randalls better tube heads,ive been seeing good deals on Peavey 6505’s especially the 25w version even older Egnaters

Marshall or a good Marshall clone. My Marshall of choice is my 1982 JCM 800 which I have owned for about 30 years. It’s a 50 watt single channel head.

As far as clones go, the PRS HX/DA is a Plexi clone and it is amazing. It’s the amplifier that I happily play every single day. Now they call it the HDRX.

For me it has to be Marshall. Which Marshall depends on how much drive you want.

I prefer the plexi tone, I found it in an SV20. I use an attenuator and keep it cranked (my band mics everything).

My backup/home amp is a DSL40CR, with the 6 button footswitch I think it's a great gig amp.

I also had (briefly) a Magnatone Super 15 head. Got it from Sweetwater, but, like the Marshall Studio Classic JCM 800 20w head I had previously, it was FANTASTIC at very loud volume, but suffered at lower bedroom volumes to recreate that fantastic tone. I could have gotten an attenuator (could have done so for the JCM 800 too, I suppose), but after paying $2k for the Magnatone, the idea of having to pay a few hundred more for a decent attenuator to make the amp useable for me was a turn off... so I sent it back and am sticking with my Marshall DSLs (see my previous post).

That said, if I was a gigging musician that Magnatone would be on my shortlist of amps... it's pretty awesome!

That said, one of the things that I have learned is that the speaker(s) in your cab is every bit as important as you amp... OR your pickups. Do not underestimate the affect a speaker swap can have on your tone. I can be pretty monumental. The Greenback my buddy put in my 1x12 cab completely transformed my DSL40's tone. I love me some Greenbacks now! Considering getting a couple for my 4x10 to give it a blended sound.

Your favorite amp for clean to medium overdrive and vintage PAF Les Paul?