.... and by Explorers I also mean the Explorer copies like Hamer Standards, etc...

For all of you that have owned, played and loved them, tell me about your explorers and why you like them.

What's great about them? What isn't?

I've owned numerous LPs, strats teles, SGs, Firebirds, Vs etc ec, but for some reason have never really even played an Explorer. But I'm keen to find out more.

Give me your opinions!

I’ve owned an Epi Korina “Exploder” it wasn’t too bad. Neck was a little chunkier than I wanted. I currently have a LTD Snakebyte... a modern take on Hetfields white ESP EX from the 80s. It’s a top notch guitar.. I wouldn’t mind trying a Hamer to see how they are..

I love Explorers with the right pickups A2's seemed the best for me. Like a idiot I sold a Gibson just like Allen Collins with vibrato bar and chunky neck.

I have only played them (never owned, plan on it, though.)

My initial thoughts were - this is a very well balanced and comfortable design! Much like a Firebird it forces you to use your hands correctly and feels great when you're wearing it or playing sitting down. What isn't great is they feel huge when you're used to a Les Paul. They are usually, or maybe it's just the ones I've played (I'd say around ~10) pretty heavy.
Apart from that, neck, feel etc. is the usual Gibson 2 humbucker guitar.

I am just someone who tested them, don't own one, though.

I owned an Epi Korina explorer for awhile. I liked it a lot, but in the end it wasn't doing anything for me that my Epi SG wasn't and it cost a whole lot more. I was also getting tired of it being so damned big. I'm sure I could've swapped the pickups and really had a whole lot more guitar on my hands than the price would warrant.

I let it go but I'd own one again in a heartbeat. Excellent balance, and acoustically very resonant. I played a Hamer import in a shop once that was truly flawless as well and sounded amazing.

I had never owned or even played an explorer until about a week ago when I picked up a Lzzy Hale explorer. At first the huge triangle of wood felt wacky, but it's REALLY growing on me. Feel wise its not like any other guitar i've owned or played, it sounds cliche' but it just feels built to rock. I think it has to do with where your forearm sits. Only minor nitpick I have so far about the design is how it doesn't balance that well sitting imo, it's a bit back heavy and most comfortable ..for me.. if I have the back rested on the arm of the couch or chair. Standing its perfect.

This particular guitar has fairly thin neck front to back and mellow shoulders and very nice feel overall (maybe all Gibson Explorers are the same?) I'm sold on the design and wish I had got one years ago. Tone wise (57 Classic and Classic + in this case) it has a real thump and just begs you to play heavy riffs. Its not muddy but certainly warmer than a maple topped LP. Im not sure I totally dig the pups.. but the basic character of it is really cool, almost like it needs a hotter/meaner set of pups to show its true personality. I dig it, great axe.
Last edited: Aug 8, 2018

I own two, an Epiphone '58 and a Gibson Explorer 120.
I LOVE the neck on the Epiphone, its nice and chunky and the satin finish feels great.
If I ever get a custom built guitar, I'm gonna have the luthier copy that neck. Dead serious.

All in all, its a quite dark sounding guitar, which might have to to with the thick finish.
It does sound good enough with the EMG 81 / 60 set, its my Hetfield Tribute guitar kinda. It also was the first decent guitar I bought, so it'll never leave, even if I have much better guitars now.
It plays well though, I can get the action down to the same measurements as my other guitars.

Lots of dings and chips as well, but its a metal axe so its part of the look now. The Gibson has a much smaller neck, much like the 60s slim taper on my LP Studio.
Still very nice feeling, and it feels great with the binding on the neck, which is part of the reason I bought this guitar. Sadly no nibs though.

Soundwise, its much brighter than the Epiphone (as expected) but it still has that chunk to it, that Explorers tend to have. Just from being a huge hunk of mahogany I guess.
It originally came with a white pickguard and BB Pros, it has EMG Hetfields now, a black/white/black guard and nickel hardware. Despite their size, Explorers are very comfortable to play for me, in either sitting or standing position. They are very well balanced on a strap and you can rest your forearm nicely while picking. Just watch out for doorframes and other musicians

Soundwise, Explorers tend to have less top-end compared to a Les Paul, which is great for rhythm guitar playing. Great bass foundation and warm, fat sound make it a staple in heavy music.

Check out this thread as well:
http://www.mylespaul.com/threads/think-im-back-into-explorer-guitars-being-my-favorite.411717/

MY HAMER LIMITED RUN KORINA STANDARD weighs 8.4 has throbak sle101 plus pups , neck is like a 59 . Never measured it because it plays like butter. A well made guitar. I find the shape to be hard to play while sitting down. However, turnndown the gain and switch to the neck pup and it’s a blues player

What I think sets the Explorer apart is that big mahogny body, it resonates great unplugged.

The neck is chunky without being to big and I do think it’s comfortable to play it sitting down (the V not so much) and of course it looks so cool!

I have an Epi Lee Malia explorer, LOVE IT! That big chunk of wood under the picking arm is so very comfy. It has a P=94 in the neck and a Lee Malia signature in the bridge. '59 neck, so in the medium range of neck thicknesses. And most important, an Explorer compels you take a rock stance while playing. It enhances the tones. 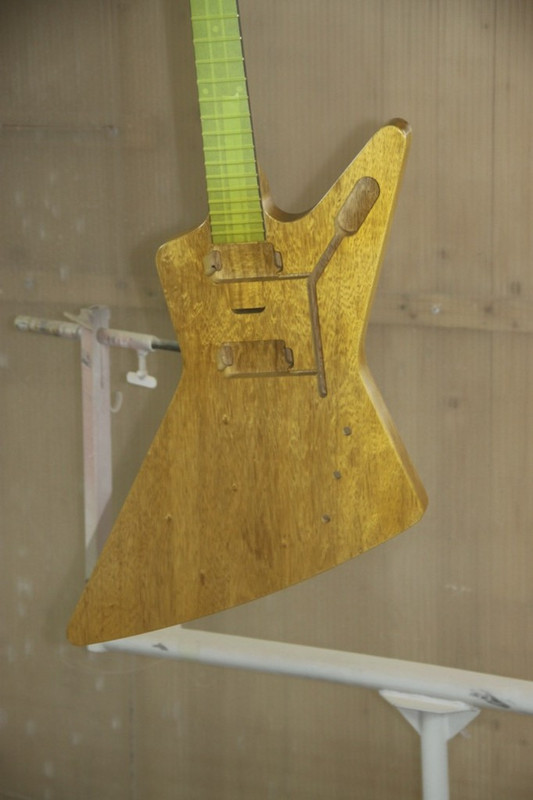 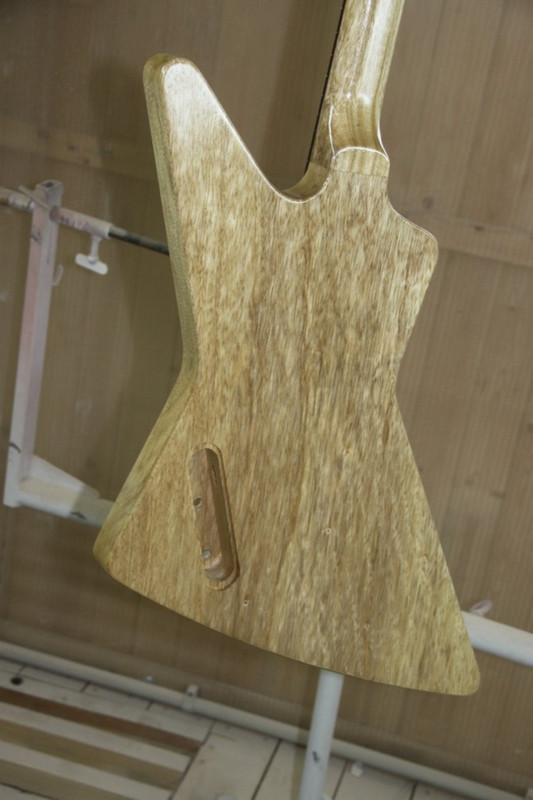 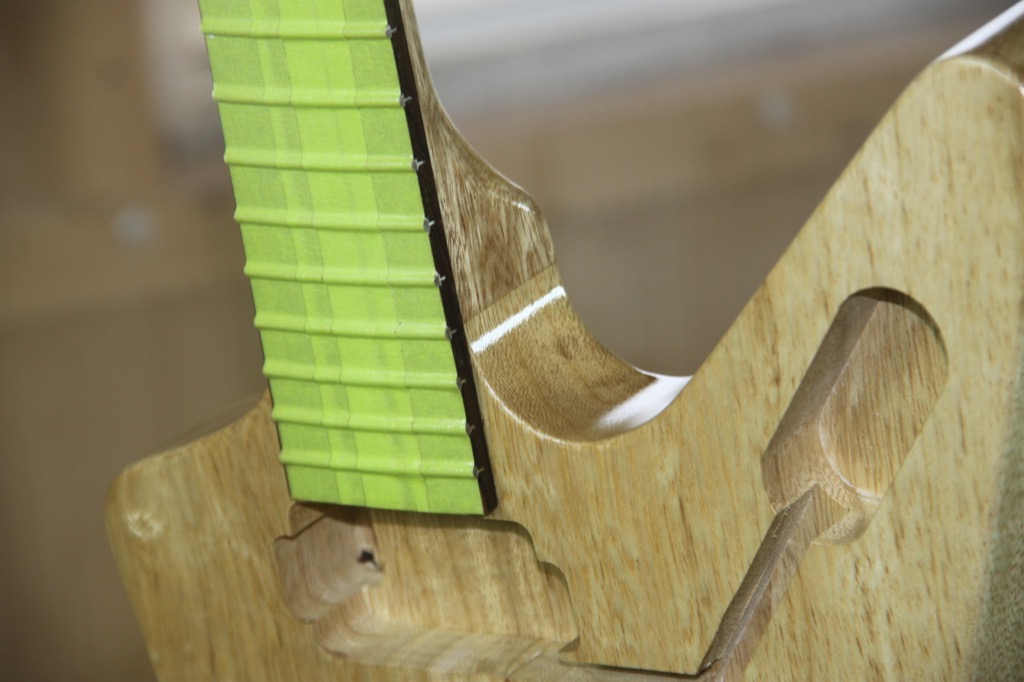 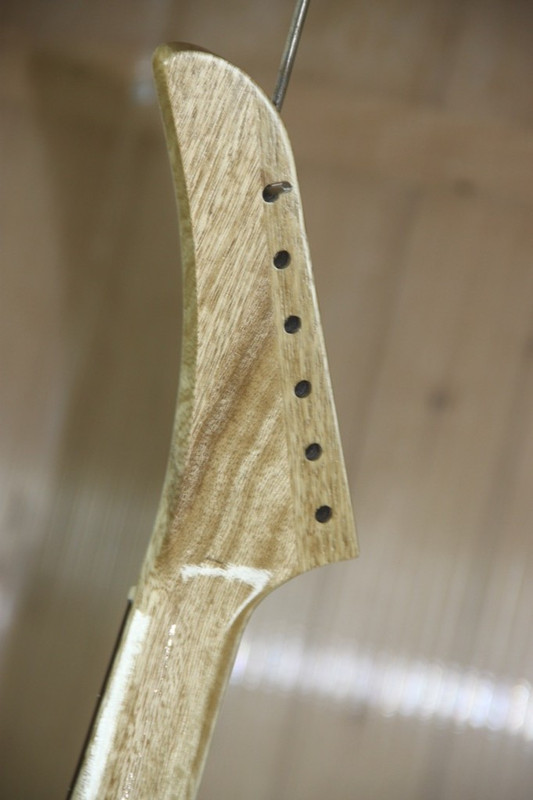 Had the Hammer standard back in the day, and all I can really remember is that it sounded GREAT! Besides being heavy and then cussing when I would bump the rear "fin"

Left Paw said:
I find the shape to be hard to play while sitting down.
Click to expand...

This is how to play an Explorer shaped guitar sitting down.

^^This. But for me, the "normal" position works pretty good as well.
Standing up, an Explorer might just be the best guitar to play, even a tiny bit better than a Les Paul. Really great design overall.

C_Becker said:
^^This. But for me, the "normal" position works pretty good as well.
Standing up, an Explorer might just be the best guitar to play, even a tiny bit better than a Les Paul. Really great design overall.
Click to expand...

I play all my guitars sitting down like the picture I shared, to me that's the "normal" way. I can't play a guitar sitting down with one resting on my right leg, it feels unnatural to me.

Looks great!
Who's building it?

I love mine! It's a split-headstock korina made by forum member atj - it's probably my best guitar! It's got ECP pups and vintage taper CTS pots etc., so it really does everything! most comfortable guitar to play sitting down?
2 3 4