OK, so there have been loads of threads and posts about the G0 so I thought that once and for all we could start a thread covering the Guitar Center Exclusive 1960 Historic Reissue Les Paul or as we've all come to know and lover her the G0.

So lets include as much information about the guitar that we can (build, body, finishes, top, the electronics, the neck, the hardware, and of course photos and videos, and anything I've left out).

Here's what little I know:


I know I've probably missed alot of information and mistated some, so feel free to add and correct where needed. Oh, and post your pictures too.

What a perfect chance to show my lovely G0 !! Before and after reflectors and pointers. It has easily become my #1.

Sorry not much tech info to add.
R 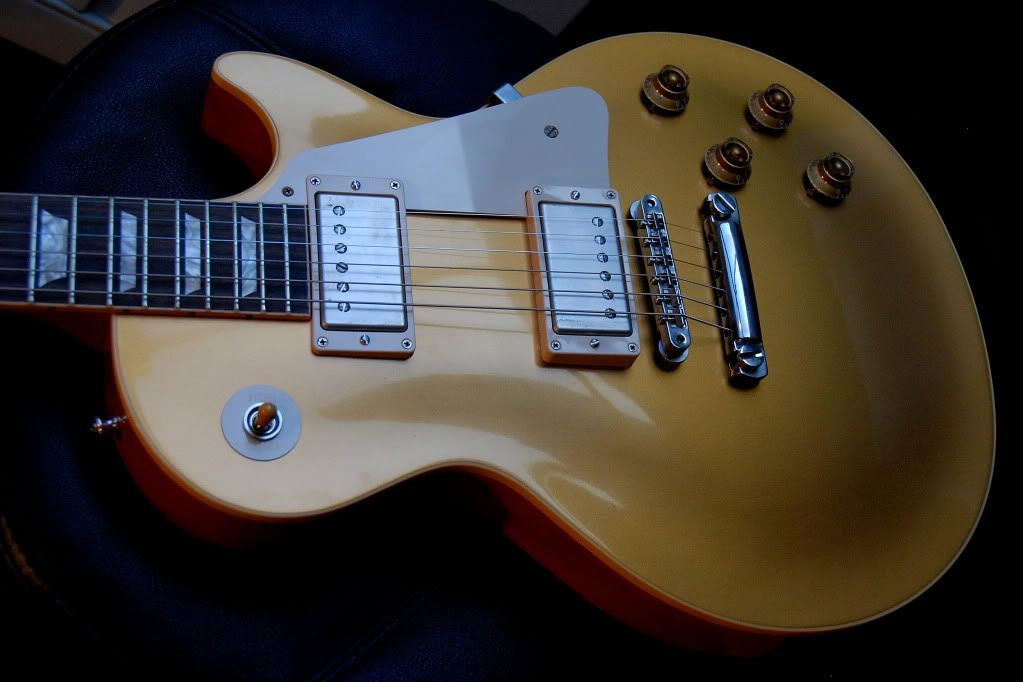 Nice collection, and looks like another wrinkle in the specs. Your goldtop and dark burst with flames have knob pointers.

Hi! Mine is the second one made out of the initial run of Five in 2002. It came with BB1& 2. Mine has a Birdseye Top and a Braz fingerboard (but not documented by Gibson). It came in what was called "Takburst". The first one and mine were noted as "Presentation Guitars" and arrived at GC Hollywood on the 18th of Sept. 2002. They were flown out and had their own seats on the plane. The other three guitars were shipped by FedEx.
I sent it to Historic Makeovers last year:

Here's how it looked when I first bought it way back when:

I'll chime in with mine...a 2007 G0 Darkburst...the best Les Paul I've played..Mine has the knob pointers, not sure if they were factory or added by the previous owner...here goes:

For the longest time (I think '02-'09) they were only available in just two finishes:

Some of the later Tak Bursts looked more like Lemonburst and were often called such.

An important and often asked question. The differences between an R0 and a G0. As with many of the custom shop reissues there are variations.

G0's (at least the earlier ones) don't have the same electronics (pots & caps) found in most other Custom Shop LPs.

G0's, even though the serial number is designated "G0" have the "R0" stamp inside the control cavity.

The first two years 2002 and 2003 they were NOT G0s! They were a limited run of R0s for Guitar Center. They had the "Custom Authentic" treatment through 2005. The finish color was originally known as "Takburst".

Here is an official model designation for a 2003 Guitar Center R0:

SKATTERBRANE said:
The first two years 2002 and 2003 they were NOT G0s! They were a limited run of R0s for Guitar Center. They had the "Custom Authentic" treatment through 2005. The finish color was originally known as "Takburst".

Here is an official model designation for a 2003 Guitar Center R0:

Thanks for the great info.

Hopefully this thread can answer alot of the questions that come up concerning the G0's.

TM1 said:
Mine has a Birdseye Top and a Braz fingerboard (but not documented by Gibson).
Click to expand...

i'm not calling you out, but if Gibson didn't document it, did you have someone else verify the species of rosewood?

This thread is awesome. I a huge fan of the RO/GO due to the neck sizes. Have owned oxbloods, R7s, etc.. but keep coming back to the RO/GO series. Love these guitars!

Huge thanks to GuitarHack for this thread.

Ok, I will play. Here is mine. G0 7001. The first one made in 2007. Maybe the first one plek'd, with factory bumblebees and Cts pots stock.They didn't do this before 07. She is all killer and no filler.If anyone has one pre 07 that is all historic spec from the factory, can you please let me know? G0's must be keepers, don't see too many up for sale - not like they're big brothers the R0, which are plentiful, assuming one has the scratch to lay out for one.

Here is your opportunity to acquire one. Any love for the darkburst's out there?

One thing to add is G0s have black side markers not the tortoise colored ones.
You must log in or register to reply here.