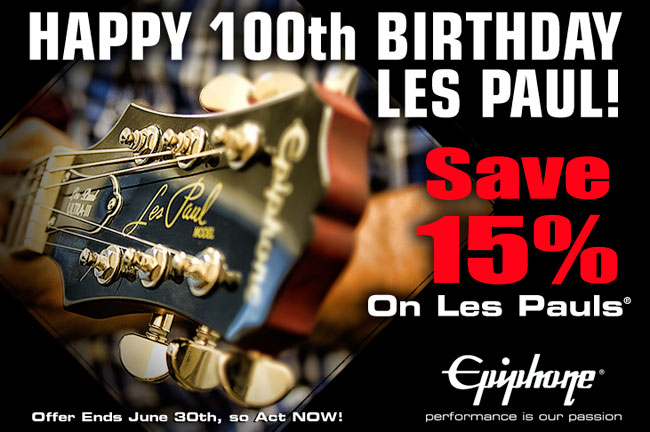 Fans Can Receive 15 Percent Off Epiphone Les Pauls through June 30
Epiphone celebrates the 100th birthday of Les Paul with a one-of-a-kind sale! Beginning on June 9, Les Paul's birthday, Epiphone fans can save 15% percent on Epiphone Les Pauls at participating Authorized Epiphone dealers. The sale will be offered through June 30, 2015 and includes classic Les Paul models such as the Les Paul Plustop PRO, Les Paul "Tribute" Plus Outfit, Les Paul Special II and many more.
Les Paul -- the "Wizard of Waukesha" -- was a lifelong fan and friend of the Epiphone and Gibson families. For more than 50 years, Les worked closely with Epiphone luthiers reviewing new ideas and innovations. His legacy continues to inspire every Les Paul made by Epiphone.
"They are damn fine instruments, I swear by them!" said Les of Epiphone's Les Pauls. "A kid can get an Epiphone, learn well on one and have it and play it the rest of his life."

Now is the chance to save over $100 on Epiphone's Les Pauls! Epiphone Les Pauls proudly carry Les' famous gold signature and feature his favorite "Les Paul" ingredients including Mahogany bodies, Maple tops, Deep Set Neck Joints, Rosewood or Ebony fingerboards, as well as premium electronics and hardware such as Epiphone's new ProBucker&#8482; pickups, Grover® machine heads and the LockTone&#8482; tune-o-matic/stopbar bridge and tailpiece system. From beginner to pro, Epiphone has the perfect Les Paul for all players. For more information on the Les Paul sale, please visit your participating authorized Epiphone retailer.

Already got sale e-mails from AMS, Zzounds, and MF. I imagine Sweetwater will send theirs any minute. Too bad they don't have anything I'm interested in. And too bad I'm broke anyway!

Based on what I see at Sweetwater they may have raised the price a bit prior to the 'instant savings.' That and the Lee Malia is not included in the discount.

Yes, I was thinking about it!

So it's basically the same sale you can get any day of the week if you call at musicians friend or guitar center?

campfirehero said:
So it's basically the same sale you can get any day of the week if you call at musicians friend or guitar center?
Click to expand...

Thats exactly what I was thinking.

I bit. I bought a Classic T. I've been looking at them for a while and this offer, along with Sweetwater's 24 month 0% financing, plus the slight amusement of buying a Les Paul on Les' 100th birthday, was enough to get me.

I know some hate the robotuners (and I too oppose the concept of making them standard), but I play a lot of Rocksmith and the ability to switch quickly between tunings vs. having to retune or switch guitars is appealing.

That pic of the Les Paul in that Epiphone ad shows a Les Paul Ultra Pro. What are the aesthetics of that guitar?

RandyRhoadsLesPaul said:
That pic of the Les Paul in that Epiphone ad shows a Les Paul Ultra Pro. What are the aesthetics of that guitar?
Click to expand...

It's not a Ultra Pro, it's an Ultra-III

here you go for more informations

[ame]http://www.youtube.com/watch?v=Bn54VB33U3Y[/ame]
You must log in or register to reply here.

opinions and info on this Epiphone les paul, please