Differing Mindsets In Canada (And Elsewhere) And The US - What Causes Fear In The US?

Before I start I want to point out that this thread isn't about gun control but, rather, is about the perceived need to carry a gun. It is about the fear in which one must live in order to perceive the most innocent of encounters as potential threats.

In some threads here recently some of us from countries other than the US have questioned why it is that Americans feel the need to carry guns when the rest of us don't, despite the fact that our criminals carry guns just as they do in the US. I have mused that it must be a cultural thing in that Americans fear their fellow citizens while we here in Canada (and other countries) do not.

Well the story linked below has hit the news up here and I think it perfectly demonstrates the differences between Canada and the US with respect to guns and the ways in which we perceive our fellow citizens.

It seems a veteran cop from Kalamazoo was in Calgary and was walking through a local park with his wife when two guys (likely a wee bit drunkish and thus overly friendly) approached them and asked if they had been to the Stampede yet. The officer perceived this as a threat and, in a letter to a Calgary newspaper, lamented the fact that he was not allowed to carry his off-duty weapon while in Canada as he seems to think that he needed it to protect himself and his wife (he also felt the need to bring Jesus into it but that is another issue altogether). The guy doesn't seem to grasp the fact that his argument is severely weakened by the fact that absolutely nothing bad happened and that he obviously didn't actually need a gun as he claims. But leaving his inability to reach that simple conclusion aside, his belief that he needed a gun to 'protect' himself and his wife from two guys asking a simple question clearly demonstrates the difference between American society and ours. I would never have perceived those two guys as a threat nor, I suspect, would the majority of Canadians. Had that American been carrying a gun, or had this happened somewhere in the US, it is entirely possible that those two young guys would have been shot and killed - not because they had done anything wrong but because the guy carrying the gun was ridiculously paranoid (everyone I've spoken to about this today thinks this guy is a paranoid nutcase because he perceived such an innocent encounter as one in which a gun was required).

I don't live in fear of anything and do not know anyone who does so I cannot imagine what it must be like to live like that nor what it must take to make one so fearful. So I have to ask - what is it that makes so many Americans so fearful of their neighbors and fellow citizens? Is it your media? Is it something else? What is it that causes and perpetuates this fear?

Here is a link to the guy's original letter to the Calgary newspaper:


Here is a link to a column written by an American who lives and works in Calgary:

In that column she makes a good point about the differences in the mindsets of Americans and Canadians by stating "Americans argue that they need to carry guns, because having a concealed weapon makes them feel safe. Their thinking seems to be that at any given moment, they could be under attack from the very next person they meet on the street, and they&#8217;ll need to shoot in self-defence. Whereas, when you walk down a street in Canada, you don&#8217;t assume that you&#8217;re at risk of being suddenly assaulted or killed. You just see ordinary people going about their day and you give their motives no further thought."


Here are a couple of other links to the story and the online reaction to it:


And the comments on Twitter illustrate the cultural divide quite well too:


So I'll ask again in case my questions got buried earlier in this post - what is it that makes so many Americans so fearful of their neighbors and fellow citizens? Is it your media? Is it something else? What is it that causes and perpetuates this fear?

It's been drummed in to us since youth..... American Boyscout motto "ALWAYS be prepared!"


Of course you'll get all the Constitutional arguments as well.

One American who carries a gun for a living isn't a good example to use as a representative of the average American. Many of us don't have guns, and I for one, don't have a problem with my countrymen who do.

Sorry bro but we are not all toting guns everywhere living in fear. I'd say that not many of us don't , unlike your post whereas you believe "so many" of us do.

Most of us down here in the US don't think that way. I have a few guns for hunting, and fully support our gun rights, but have never felt the need to carry for protection. Yes, something could happen I guess. But that stuff is few and far between.

I know people that at times it seems like all they think about is worst case scenarios and the need to carry. I think it is pretty sad to think someone lives in such constant fear of perceived threats that, most likely, never happen.

Call me crazy. But it sure is nice to go out with the wife in kids and be able to relax, smile, and have a good time. Instead of constantly feeling the need to look over my shoulder for wrong doers and evil.

geochem1st said:
It's been drummed in to us since youth..... American Boyscout motto "ALWAYS be prepared!"
Click to expand...

The Boy Scouts were started in Britain and exist all over the place so that ain't it.

Of course you'll get all the Constitutional arguments as well.
Click to expand...

This isn't about the right to own a gun, it is about the perceived need for one and the perception that the most innocent of encounters are threatening in some way.

Engel said:
Sorry bro but we are not all toting guns everywhere living in fear. I'd say that not many of us don't , unlike your post whereas you believe "so many" of us do.
Click to expand...

When 47% of Americans own guns 'so many' is accurate.

ETA: Sorry, I had meant to include a link for this but forgot.

colchar said:
The Boy Scouts were started in Britain and exist all over the place so that ain't it.


This isn't about the right to own a gun, it is about the perceived need for one and the perception that the most innocent of encounters are threatening in some way.
Click to expand...

Our boyscouts let us shoot. Do yours?
T

As I've said before: coward bedroom videogamers too afraid of the world to live in it, wagin' war against videogame villains and deer in the name of freedom to do almost nothing and a dream of becoming rich enough where if you **** up, the govt will pay it for you and give you some extra change.

If i lived in a country that had guys cruising around with guns i'd probably feel a little on edge myself and be tempted to carry for my own protection. On a lesser level it's getting common to see stabbings over here. For peace of mind i like to be prepared by maintaining a decent size and strength with a hint of crazy eyes to prevent any potential trouble.

If it was easier to maintain a gun license over here i would probably keep a gun for home protection and peace of mind.
T

Because Us Americans dont mess around. That and we have to protect ourselves from sterotypes. (purple folks)

colchar said:
When 47% of Americans own guns 'so many' is accurate.
Click to expand...

Owning and feeling the need to carry are two different things. I got a .22 rifle for my 14th birthday. Sort of right of passage in my family. Dad hunted and was a reserve police officer, so firearms were part of my upbrining. I sold my rifle to my younger brother before I enlisted, and have not owned a personal weapon since.

I wish I knew what frightened these folk so. Lot of vested interests are best served by formenting the fear, and have the full force of corporate media with which to do it.

If the founding fathers felt the need to include the right to keep and bear arms, there must be a constant threat that one should be prepared for by keeping and bearing arms. 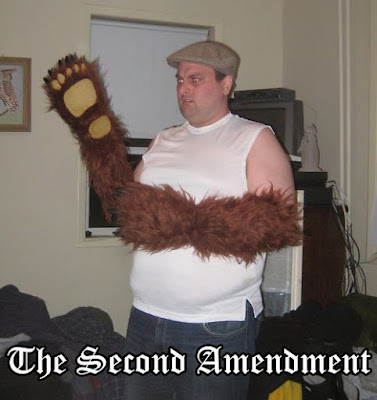 I conceal carry all the time, not from paranoia but from the realization that I live in a state where bear and moose populate our backyards. Plain and simple, I dont want to be caught with my pants down. Now as far as the idiot in the article, I'd say he's off his rocker. Just because someone comes up to you does not mean they are gonna put you in danger. What a tool. I personally do blame our media for a lot of paranoia. Turn on the news and its all, two people murdered here or there or whatever. I dont even watch or read news because of this. So yea, take a feeble mind, plug in some crappy media, add a some guns in and you get this crap.

I have mused that it must be a cultural thing in that Americans fear their fellow citizens while we here in Canada (and other countries) do not.
Click to expand...

When you use "Fear" as the basis of your argument, your logic fails under nothing more than a stereotype.

Why carry a gun or NOT carry a gun? Because we have that option, and are afforded our rights to self-protection, based on our individually perceived level of necessity.

Pro-choice all the way. How about you? Do you feel ok in NOT having the same option, if you felt it necessary?

We're under no illusion that any policing authority is assigned to protect us as individuals, so we are given that option of personal responsibility.

geochem1st said:
Our boyscouts let us shoot. Do yours?
Click to expand...

No idea as I was never involved and don't know anyone who was.

cmh6122 said:
I wish I knew what frightened these folk so. Lot of vested interests are best served by formenting the fear, and have the full force of corporate media with which to do it.
Click to expand...

I've noticed this in Britain as well. If you look at some of their newspapers, they constantly publish stories about crime (many of which I do not even believe are true) in what seems like an attempt to instill fear. We should all know that the Daily Mail is a useless rag but they are particularly bad about it and that paper has a daily circulation of 1.9 million with an average daily readership of 4.3 million. That amounts to an awful lot of people being fed a daily dose of fear.
You must log in or register to reply here.

U.N. Agreement Should Have All Gun Owners Up In Arms
5 6 7

Gun "enthusiasts" and poseurs in the gene pool.
2 3