Native American Chief David Bald Eagle, who appeared in the Oscar-winning 1990 film Dances With Wolves, has died aged 97.
The grandson of Chief White Bull, who fought in the Battle of the Little Bighorn in 1876, Bald Eagle appeared in more than 40 films.
He went on to become the face of South Dakota's Lakota people.
He died at his home on the Cheyenne River Indian Reservation on 22 July, according to a local funeral home.
Born in a tepee in 1919 on the Cheyenne River Sioux Tribe Reservation, his native Lakota name translates as Wounded in Winter Beautiful Bald Eagle.
He served in the US Army during World War Two where he fought in the landings at Anzio in Italy and won the silver star.
After being severely wounded by German fire while parachuting into Normandy during D-Day, Bald Eagle pursued a music career as a drummer for Cliff Keyes Big Band.
Following a foray into ballroom dancing, which ended with the tragic death of his dance partner and wife, Penny Rathburn, in a car crash, Bald Eagle established a career in Hollywood.
He trained a range of stars including John Wayne in horse and gun handling, and served as Errol Flynn's stunt double.
In the late 1950s he joined a rodeo display team and while in Belgium met his second wife, Josee.
He continued to work as an actor and became the face of South Dakota's state tourism promotions for decades.
Outside of showbusiness, Bald Eagle's dedication to the Lakota people saw him elected as the first Chief of the United Native Nations in 2001, addressing indigenous people worldwide.
His last film role was in Neither Wolf Nor Dog, which premiered at the Edinburgh Film Festival last month.
The film's director, Steven Lewis Simpson, praised Bald Eagle as "truly unique".
"His life was more extraordinary than of those that most great biographies are written about; the joys and the tragedies," he said.
"He was an astonishingly beautiful man. The sparkle from his eyes when he smiled or was being mischievous was a joy to behold."
Rooks Funeral Home in Eagle Butte said Bald Eagle's funeral is scheduled for 29 July at Black Hills National Cemetery in Sturgis, following a traditional four-day wake. 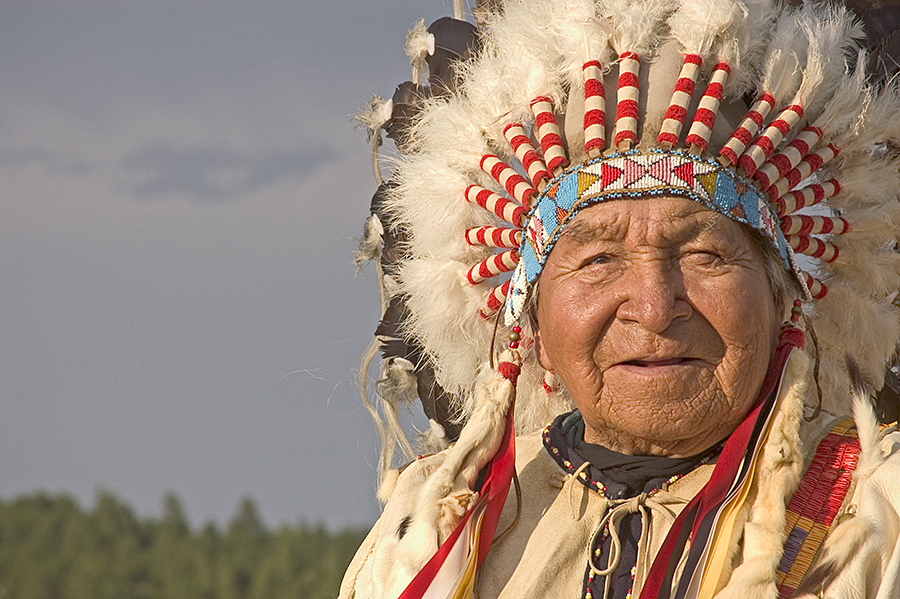 Didn't even try out for the "Village People"...pffft.

dude had one hell of a life.

Men he lived through a lot of change, RIP chief

97 is a damn good kick at the cat...like that even needs to be said.

Doesn't that mean buffalo? From Dances with wolves.

It wasn't too long ago I arrested a Lakota Sioux down here in Southeast Tennessee. I reckon he is the only Sioux I've ever seen outside of a movie. While making small talk with this jackass I mentioned Sitting Bull, the only Sioux Indian I know from history, and I was shocked when he called him a pu**y for surrendering to the US Army. He said true Sioux Nation members despised him. I don't know how true that is, but he sure went on a harsh rant about the deceased chief.

The flipside is that every old family down here claims Cherokee Indian ancestry. As a small child in the '70s my grandmother told me stories about her grandmother who was a full blooded Cherokee. I recall seeing my great-grandmother back then, and she looked exactly like an old Indian woman.

I don't know if the Indian women back then were irresistibly hot or the early pioneer men were just a bunch of whores.

I've read in many places that the Cherokee women were quite attractive to European settlers and the following few generations. And they were willing to work with the whites for a better way....

Only to get screwed in the long run and displaced multiple times.

Great life despite all the adversity! Definitely qualifies for a role model of all nations! Rock on with the Great Spirit!

Yeah, they got screwed alright.

I know of area landholders descended from folks who won land grants from President Jackson following the takeover of land in the southeast after the removal of the Cherokees following the Trail of Tears. Some still have the original documentation from the federal government from the 1830s.

Wow. Helluva good run. It's crazy to think that a guy born in a tepee in 1919 probably had a smart phone at the end of his life.

This guy must have witnessed probably the greatest change of livingstandards throughout human history. From being born in a teepee to landing on the moon, to smartphones and the internet. all in one lifetime.

RIP. A very full life. It is sad that he lived to see the demise of the "Like" button.

He has only gone on to be with the Great Spirit. He will be missed.
You must log in or register to reply here.

When Will White People Stop Making Movies Like "Avatar"?
5 6 7