Here ya go, Brother D, an entire thread devoted to your Lester's story.

OH no you DIDNT!

What can i say? You gots several devotees. I humbly include myself,

Ok, so here is part 1 copied from the other thread

I was a late bloomer. Took me till 80 or 81 to find All the World's a Stage and be blown away by the incredible sounds and textures Alex coaxed out of that beast...
Being live and not in the studio pulling of BATSD was it for me.

I saw the tobacco burst on the back cover (only just found out the name from here).

But I didn't know what it was (or Geddy's bass for that matter. LOL! I thought he modded it and put that big old hole under the pickup. Didn't know that's how they were built!)

I started out with cheap Hondo's and built my own parts-casters and stuff. Never could afford anything good and I couldn't play yet anyway.

Went into the Army in 81 and brought my Hondo caster with me. While I was there some guys that knew how to actually play picked it up and made sounds on that thing I never knew existed. He showed me barre chords that gave me the foundation to help me 'fake it till I can make it' for years!

In the Army I was stationed in Ft Lewis Washington and used to go to downtown Olympia for something to do on weekends. Found a music store there and decided to look around for kicks.

The place was loaded with guitars on wall hangers of all colors and types, but one stuck out from among the darker colors behind the counter. This one!
IMG_8902a by DarrellV posted Jun 8, 2017 at 12:24 PM

The pictures don't do it justice because it has aged for 34 years, but when it was new it lit up like a fire engine behind those other guitars!

This is where it gets goofy. As I stood there looking at it, stunned really, I had to fight up the courage to ask the clerk if I could see it closer. He asked if I wanted to hold it and I remember blurting out 'Can I?!' in complete surprise..

I thought surely something this beautiful had to very expensive and out of the touch of mere strangers who walked in off the street. Surely they didn't just trust anybody with these things. (This was before Guitar Center, LOL!)

But he put it in my hands and it was heavy, and sparkly, and beautiful like nothing I had ever seen before. I had the complete 'I'm not worthy' experience right there on the spot!

I had no money or talent, as proved by my meager attempt to play the opening of 'Limelight' by Rush... The clerk quipped that I was doin' it wrong. I knew that! Dang! I felt my cheeks burn in embarrassment. So I gave it back to him.

When I saw the price tag I knew there was no way I could afford it! It said Standard on the TRC, but it cost as much as the Customs in the place! I asked them why that should be? They couldn't find an answer for me..

I put $300 down on it and put it on layaway... I used to visit it on weekends and I can still here the murmurings of awe from the other folks in the store as I opened that chainsaw case and they caught a glimpse of it in the case. I was both embarrassed for the attention and extremely proud that it was mine! Well, almost.
by DarrellV posted Nov 7, 2016 at 3:07 PM

Left the Army a year or so later without it... Only a Polaroid of it in the store that I've long since lost. Just a memory for 34 years every time a flashy red car or motorcycle went by I would say to whoever was next to me 'Yup! That's what she looked like'. 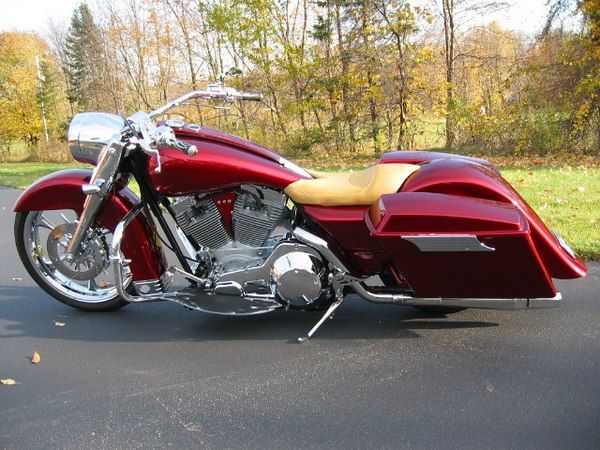 Years went by and the memory of it all but faded to just the color and the fact it was a Les Paul.

I was getting frustrated as a guitar player and after the Army stint I switched to bass.

Simple, 4 strings, no chords, usually slower paced...Perfect for me!

I kept my beaters around but seldom played them.
My first el-cheapo Hondo Living off post at Ft Lewis, WA with my modded Hondo. Now with a Strat neck and black pick guard. My first bass and the other fella has my beater MY OLD GUITAR AND AMP

By the time I was asked to join a country band I had a real Fender bass! Sort of.... Me And Red Bass

But this was the direction I was heading for the next 20 years or so culminating in 89 with this stunning Guild Pilot that is still my number 1. But it's soooo true! If you ask anyone around here that knows me, especially at work they will tell you, 'Darrell? Yeah, pay no attention to him! Nobody likes him!'

But it's soooo true! If you ask anyone around here that knows me, especially at work they will tell you, 'Darrell? Yeah, pay no attention to him! Nobody likes him!'

I started playing bass with the worship team at my new church that found me 25 years ago.

Still there every Sunday and still play with our outreach team The Angel Band.

But the desire to play guitar never really left me and then about 15 years ago the bug bit again.

We were practicing weekly now and one night one of the guys showed up with a Jackson PC-2.

Not his... Just a fancier example

I played it and it was then that I knew I had to get back to guitar!

There are exceptions to every rule!

So down the road a bit my wife bought me this lovely Sheraton and I started alternating playing bass and some guitar with the team. Epi Sheraton Tobacco Burst with Gold hardware. Great guitar, but we belly bumped too much.

My first love was the sound of a hollow body ala Doobie Brothers Tom Johnston and the like. Loved the thick snarly tones they made so the Sheraton made sense at the time. Our team leader, Debbie went home to be with the Lord in 2006 leaving our little group with a drummer, a bassist (me), and 2 background singers... No lead instrument (she played keys), no lead singer, music picker or team leader. We were crushed at the loss of our sister and wondered if we should continue on. We wanted to, but how?

New Years Eve 2015 One of the last pictures we have of her.. I have to give a personal statement of faith here, because without it, the rest of the pieces won't make any sense.

It's my personal choice and I'm not trying to convert anyone. I can only say how it has impacted me personally in the road to getting my dream Lester and leave it at that. It is MHO if that makes you feel better.

This thread wouldn't be possible for me to complete if Cherry hadn't posted the thread about music in church. The outpouring of posts by other church and worship team musicians was really surprising to me and encouraging.

And I have to give a shout out to the mods for allowing it!

There is a verse that has been proven true to me repeatedly over the years that goes along the lines of a promise that God will give you the desires of your heart if you just diligently seek Him, and faithfully do what he has given you to do. This will play out throughout the rest of the story...

We decided to go on with the band, but it meant that I would have to switch over to guitar full time AND sing the lead parts!

AND I had to have a set of songs ready for next Sunday!

Me! The shy bass player who liked to hide beside the drummer and not look at anybody.... yeah, that guy! I had a bare bones knowledge of maybe 5 chords! And now I had to transcribe piano sheet music to guitar, in one week! Are you kidding me?

As I broke out in a cold sweat thinking about the weight of the tasks ahead of me I saw a vision of myself as in a daydream (delirium?) being gently pushed into the front of the group and playing guitar, and I heard in my head a coaxing voice saying 'isn't this what you've wanted? Now is your time.'

Well, no! Actually I would rather have Debbie back if you want the truth... scared crap-less doesn't begin to describe how I felt.

I actually did pull it off the following Sunday, and every week thereafter.... How?

There but for the grace of God go I! I really don't know how else I could have done it to this day!

I am more confident in my playing and singing ability. I lost a good part of my shyness and self consciousness along the way.

Anyone who has talked with me in here would prolly be surprised I was ever that way, LOL! But it's true! I lived the better part of my early life behind 'the wall' as Floyd called it.

My goal is to be more Fezz like every time we play out. Just enjoy it and not worry so much about the little things.

but to illustrate that the space of time leading to the acquisition of my Pearl of Great Price was not spent in a vacuum. And to shed some light on the stepping stones and forks in the road that all led up to it.
Last edited: Nov 1, 2017

What a truly inspiring story so far, both for People of Faith, as well as just an example of sticking with something,

DarrellV said:
Cherry generously gave me an entire thread to fill so my aim is hopefully not to bore you to tears

cherrysunburst00 said:
What a truly inspiring story so far, both for People of Faith, as well as just an example of sticking with something,
Click to expand...

Thanks! A lot of persistence and perspiration too! I think the word is steadfastness!

More than once I thought i was crazy and wanted to quit in the face of seemingly overwhelming odds or my own self defeating nature!

It's really no different than the struggles we all face with our own personal demons....

cherrysunburst00 said:
What a truly inspiring story so far, both for People of Faith, as well as just an example of sticking with something,
Click to expand...

Well, you started it! I hope you are getting your money's worth!

As OP only you can answer that! LOL!

DarrellV said:
Well, you started it! I hope you are getting your money's worth!

As OP only you can answer that! LOL!