- Thread Note -​
This story is a non-partisan and apolitical examination of our future.

So, anybody with two brain cells to rub together SHOULD know that the American budget is in bad shape.

43 cents out of every dollar the federal government spends is borrowed.
It gets exponentially worse every day, and NOBODY in D.C. is doing anything about it.

In this day of "sustainability" how is it possible that such an unsustainable financial game can be played?
Well, I saw this Bernanke story and thought, "Finally, this fxcking moron has gotten the hint?"

Read this and see what Bernanke sees as the "real" hazard in store for us....

Federal Reserve Chairman Ben Bernanke warned Congress Wednesday it
risked taking the nation over a "massive fiscal cliff" at the end of the year.

The central bank&#8217;s boss warned expiring tax cuts and spending cuts set to be
triggered at the end of the year could hurt the economic recovery.

&#8220;Under current law, on January 1, 2013, there's going to be a massive fiscal
cliff of large spending cuts and tax increases,&#8221; Bernanke told the House
Financial Services Committee. "I hope that Congress will look at that and
figure out ways to achieve the same long-run fiscal improvement without
having it all happen at one date."

The Bush-era tax cuts and the payroll tax cut are set to expire at the end of
2012, just as $1.2 trillion in spending cuts are scheduled to be triggered.
Bernanke said that combination could throw the recovery off-kilter.

"All those things are hitting on the same day, basically," said Bernanke. "It's
quite a big event."

Bernanke, who has long said policymakers should rein in the deficit, reiterated
his call Wednesday for a &#8220;credible plan&#8221; to reassure markets that the nation
is getting its finances in order.

Failure to do so could lead to another financial crisis, or steep interest rate
spikes similar to what is currently happening in Europe, he said.

This year&#8217;s lame-duck session of Congress is expected to be one of the
busiest in history given the expiring tax cuts and the spending cuts, which
were triggered by the supercommittee&#8217;s failure last year to agree to a deficit-
cutting plan. Congress will also need to raise the debt ceiling quickly after
Election Day.

Bernanke warned that cutting off funds to the economy all at once by
allowing tax cuts to expire and trimming spending could slow economic growth.

"You ... have to protect the recovery in the near term," he warned.

President Obama wants to extend the individual tax rates for families with
annual incomes below $250,000 and individuals below $200,000, while
allowing tax rates on higher incomes to rise. Republicans want to extend all
of the Bush-era tax rates.

More and more congressional Democrats are embracing $1 million in annual
income as a threshold for the tax cuts, with those making more than $1
million hit with higher taxes.

While the economy has shown signs of improvement in recent months,
Bernanke warned that several unemployment reports have exceeded
expectations and that the labor market is still "far from normal."

"The unemployment rate remains elevated, long-term unemployment is still
near record levels, and the number of persons working part time for economic
reasons is very high," he said.

In particular, a "very worrisome problem" is the number of long-term
unemployed, as those people have a much harder time getting back into the
job market as their skills and contacts deteriorate, he said.

The underlying data on the economy suggests its expansion is "uneven and
modest by historical standards," and the continued threat posed by Europe's
debt woes remains a persistent threat to the U.S. recovery, he said.

In response to these challenges, the Fed lowered interest rates to effectively
zero, and has vowed to keep them there through the end of 2014. While he
said those efforts have contributed to the recovery, Bernanke admitted that
the job of restoring the economy to full health is now largely out of his hands.

"Monetary policy is not a panacea," he said. "The long-term health of the
economy depends mostly on decisions taken by Congress and the administration."

Despite the difficulties in getting anything done in this Congress, Bernanke
maintained a note of optimism, citing the fact that the two parties came
tantalizingly close on reaching broad deficit deals in the summer and
suggesting there still could be future opportunities.

But at the same time, he acknowledged that it is one thing for him to press
for something, and another for Congress to get it done.

"These criticisms are easy for me to make," he said. "I don't have to deal
with the politics."

Given his status as a politically independent regulator, Bernanke steered clear
of recommending a specific deficit reduction path for Congress. However, he
acknowledged that it is "very important" to address rising healthcare costs
and said that the economy would benefit from a clear plan for reforming the
housing market from Congress.

What is it that Mr. Bernanke needs to fix our budget?

One term in Congress is really the height of my own political aspiration.
Get elected, hide out from the media for two years, and retire as a One-Percenter with a great health plan.

He needs Citibank to raise the country's limit.

Paul NAILED it within the first 60 seconds with the 98% devaluation of our currency in 100 years.

Anybody ready for more of this?
Not just continuing as we are, but getting WAY more of the same?

Anyone see the love fest between Bernanke and Barney Frank at the hearing? I hope they were wearing condoms. 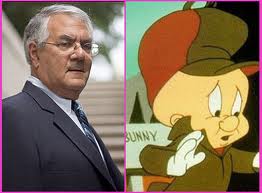 Last year I heard a story about our money that summed up nicely what the Federal Reserve has done.
Ron Paul sorta touched on it in the video above.

In 1911, a man walking down the streets of New York City with a gold coin could buy a fine men's suit.
Yep, one ounce of gold would cover the cost of having a nice suit tailored.

You can't use gold for currency now, because it's against federal law.
You may ask why that is, eh?

Anyhow, if you went to a dealer and sold your ounce of gold today you would get nearly $1,800 for it.
Gonna pay fees, taxes, etc. - and there are more making their way through the legislature...

Well, that same ounce of gold would still buy you a nice custom-tailored suit in NYC.
Same ounce of gold, same city, same country, same killer suit.
What's the only thing that has changed?

Well, that ounce of gold was worth $20 a hundred years ago.
The ONLY thing that has changed is the value of the dollar.

How's that whole Federal Reserve thing workin' out for ya?
Your dollar is worth just a hair over one penny now.


Is there ANYBODY running for President who is saying anything about this?
Just the nutty fxcker from Texas who will NEVER get elected to another office.

As to your OP, we don't have Greece's problem. QE is a huge problem because... we don't have to do it, its stupid and plays to Wall Street bond investors. Bond sales are doing well.

Gold is a commodity. How much of that $1,800/ oz is due to speculation? How much to true inflation of the dollar?

He makes a point about the tax breaks timing out at once. This will add to our woes. How big a problem is it in our recovery, I think pretty big..... but not our major problem.

Our major problems are lack of production, consumerism, and transformation to a service based economy.... and not curtailing the banks.

Geo - with the OP I was kinda leaning toward the fact that our government spends WAY too much money.

And Bernanke is squealing that the government's revenues will be disrupted.
Like it's THEIR money, and the American people are getting in the way of them getting their fxcking hands on it.

Higher taxes, more debt, more regulation, more bullsh!t laws curtailing Liberty, and transferring wealth from
those who work to those who refuse to do so will do NOTHING to address any lack of production, consumerism,
and transformation to a service based economy.
It's gonna get worse, and at a rate that will take our collective breath away before most people see it.

Curtailing the banks is more complex than I will readily speak on.
But I can assure you they have no sympathy from me.

My concern is freeing up those who work, build, create and make sh!t happen.
Allowing people to use the fruits of their labor to further their desires.

If knocking banks in the head fxcks that up, then I have a problem with it.

The biggest problem with the devaluation of the dollar is that the prices of shit are going up faster than the wages, which means people have to buy less things, or buy cheaper things, both of which are bad for everyone.

There really is no way to stop the wreck from coming is there? Certain people seem hell bent on crashing the car and taking out as many people as possible.

What is it that Mr. Bernanke needs to fix our budget?
Click to expand...

Ride it out until after November. Nobody in DC is willing to do shit that would upset their constituents even if it's the right thing to do to help get the budget under control. Even then, those assholes will already be working on their campaign strategies for the next election.

Inflation is rapid on everything but most of our largest investment, our homes. You can buy a house for a third of the cost as ten years ago. Those of us stuck in these shitty houses are completely underwater and then much less likely to spend money. Instead of making a good deal of money on our homes they have become worthless and we still pay the same as when we signed the papers. Therefore we feel broke. That means a lack of money going into the economy. The funny games they played with the housing market has destroyed this country's economy and it is never coming back.

Wasn't he one of the guys who was largely responsible for the last meltdown?


(Seriously - I'm asking a real question, here. I have no idea how economics work, and I remember hearing his name a lot in conjunction with the last fia$co....)
You must log in or register to reply here.