I'm attached to it. Been in the family since my father in law bought it new in '61. It IS my guitar, the other two are a backup and an acoustic.

I'll never part with it voluntarily.

Not most played but most attached to.

I bought this in 1986 at the age of 16 and I saved up every penny for it from my Saturday job. It's an Aria Laser Heritage, made only in 1984-5.
It cost me £169, which was a fortune to me as I earned £18 a week. It was my only electric guitar for 8 years. It has holes in the finish and is covered
in random stickers that mean nothing on the back, if I found a sticker, on it went. It has a Duncan JB at the bridge and a Kent Armstrong PAF at the neck.
The neck is 80s skinny and I don't really like the shape anymore but it is super quick to play.

It's the guitar I learned on and I wouldn't sell it (not that it's worth much at all). The funny thing is, a guy offered me a '72 hardtail Strat for £170 the week
after I bought this and I was of course flat broke. Never mind eh?
T

and the old girl in the middle

I've still got this Flamenco guitar I bought for £100 in Madrid back in 1969.
The old gal is a bit beat up now with a split on the top table and nearly worn through where a pickguard should be, but she still sounds great.

It would be my Telecaster here: Bought in 2003 to replace the Broadcaster my ex wife pawned for drugs...

It was the only guitar I had for quite a few years before the bug bit me again.

Well, there's the guitars that I play most often for the sake of being practical and then there's the one that's like an old, broken in pair of sneakers which is my '91 Custom with Super 400 inlays. That AM VR '57 Strat in the photo has become the same way, but my LP always feels so good when I pick it up.

More picks of the LP 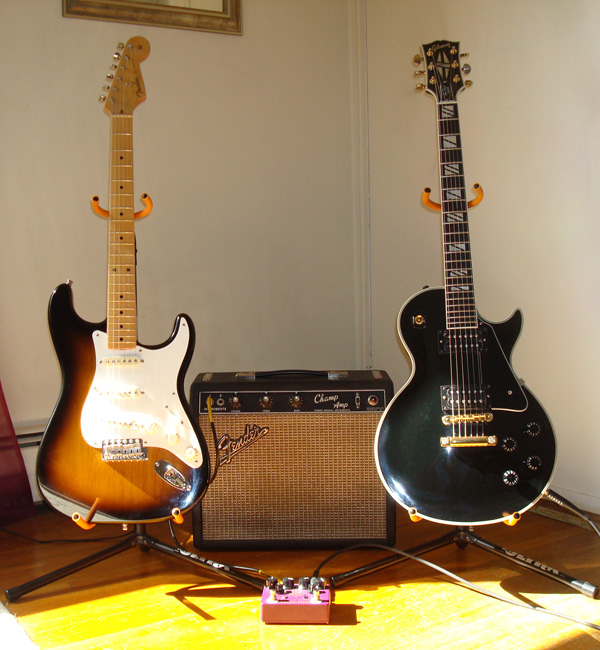 Ledheadforlife said:
That table is the coolest thing ever, where can I score one?
Click to expand...

seen them in the back of a few guitar mags in the classifieds. If I ever had one nice enough to put in it that would be a cool piece of furniture

I have two such guitars.

The first is this ES-339. I've only had it for a few months, but knew after playing it for about one hour that this was the electric I would stick with forever.

I still have the lester in this photo, but have only played it once since I got that 339. I have an ES-335 dot also... and never play it. Meanwhile, the stratoblaster was given to a nephew as a gift when he graduated from high school. I respect strats and have nothing bad to say about them at all... simply never "bonded" with this one. But I do play the hell out of the Martin... about 50/50 time-wise, between the 339 and the D-15.

Roberteaux said:
I have two such guitars.

The first is this ES-339. I've only had it for a few months, but knew after playing it for about one hour that this was the electric I would stick with forever.

Do YOU name your guitars?? Show me some pics!
2

Ever notice how one person's guitar style realy effects a guitars tone?
2