Harmony said:
I was starting to feel old but now reading all that, I feel young

Actually some of the things I do remember because of my grandmother having them and she was a hoarder.

I also wouldn't know some of those listed as I grew up in another country, so I have no idea what they are.

I do love reading about these kind of things though, we take so much for granted these days. Time changes quite fast because even my 21 year old son makes comments about how things have changed since he was a toddler

My daughter just turned 24. I swear I was changing diapers just a couple years ago. The hell the years go!?

Mindfrigg said:
I hear ya. My mother was 94. Not a pretty sight.

She must have been fairly old when she had you. I'm way older than you and my mom is 94. She gets to wear Depends.

I'm thinkin I'll get one of those 9mm jobbies for when somebody tells me I need Depends (To shoot me, not them).

14 out of 16...
We didn't really go to the movies, So I never saw a news reel.
The first house I remember living in we didn't have a phone at first. When we got one it wasn't a party line.

Not sure if you all had similar..

I remember when tv broadcasting only started late morning, and would stop broadcasting mid evening. There would be a test screen with the time when broadcasting was off.

Yeah I'm getting there, I remember all 16 of that list

, some of which is still new technology where I live

Not many people had any money back then. Most toys you had to make yourself i.e. bogey (soapbox) with old pram wheels or catapults. we played outside all the time without fear of anything. if someone stayed indoors back then it usually meant they were ill. I don't think anyone in our whole street had a TV, It was around 1962/63 when we got our first TV. 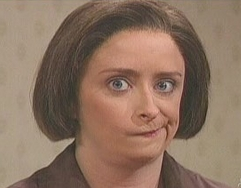 Sin Nombre said:
She must have been fairly old when she had you. I'm way older than you and my mom is 94. She gets to wear Depends.

I'm thinkin I'll get one of those 9mm jobbies for when somebody tells me I need Depends (To shoot me, not them).
Click to expand...

yes...you're always the last to know

In our neighborhood the bakery wagons were horse-drawn. We would give the horse a carrot (open palmed, so you wouldn't lose a finger), or a sugar cube.

My grandmother (still living on the old run down family farm my mother and her sisters grew up on) made suds for doing the dishes with a bar of soap in a little cage with a handle on it you shook from side to side in the water, and you added hot water from the stove to your bath water.

When we visited gramma's farm it was like going back in time: there was an outhouse (with bees!), and a hand pump for water!

Eventually the outhouse polluted the well. I got SO sick that last summer, before gramma got onto the water main they put down her dirt road!

There was a nearby grave yard overgrown with pretty good sized trees, with headstones that had poetry on them about how people had died (lightning strikes, drownings, falling off roofs, etc).

Bats flew around from the vents high on the roof of gramma's old farmhouse at night. We'd throw rocks at them. Never hit a one! Those guys dodged real good!

Just for full disclosure I was born in 1953.

Gen. Dwight D. Eisenhower inaugurated President of United States (Jan. 20).
Alleged Communist Charlie Chaplin leaves U.S. for good. Justice Dept. warns him any attempt to reenter the country will be challenged.
To counteract the threat of television, Hollywood thinks big and develops wide-screen processes such as CinemaScope, first seen in The Robe.
Lucille Ball gives birth to Desi Arnaz, Jr. on same day the fictional Little Ricky is born on I Love Lucy.
Rosalind Franklin (England), Francis Crick (England), and James Watson (US) discover the double-helical structure of DNA.
Edmund Hillary of New Zealand and Tenzing Norgay of Nepal reach the top of Mt. Everest (May 29).
Moscow announces explosion of hydrogen bomb (Aug. 20).
Jonas Salk gives himself and his family the polio vaccine

Born in 1947. Truman was President...Didn't have TV til I was in grade school, big thing in a wood cabinet that sat on the floor and showed snowy black and white pictures...Used to ride my old Schwinn bike around a local cemetery and come home when the street lights went on. Walked across the city to school through places I would not walk through now.
Listened to Chuck Berry music when it was new

My first real instrument was an original Danelectro Longhorn bass...played it in bands for over 12 years.

I remember having to find phone booths that work being a pain in the bum! Especially in country towns!

Yes there was a time where people didn't have mobile phones...Grin~

well, I was born in 1951. so Truman was the President. candy bars were only a 5 cents(a nickel). Coca Colas were only a 5 cents. you could ride your bicycle to the corner grocery store by yourself. Davy Crockett(Fess Parker) was one of the biggest TV stars on TV. oh yeah, the televisions were only in "black and white".

Oh yeah, who could forget the wax and mystery fluid tube.

I remember that. my dad and I were at a Texico Service Station. he gave me a nickel for a Coca Cola. I came back asking for a penny. what ? I told him that it went up a penny. he didn't believe me until he came over to see for himself.

I remember those too. And candy cigarettes.

I'm 31, but I love the stories in this thread. They fascinate me. I like hearing stories from the generation represented here. It seems like any time I have drinks my parents (my mom is 61, and dad is 57) we inevitably talk about their childhood. My dad grew up a bit in New Jersey, and then in Michigan, mom was all Michigan.

She's told me many times of my grandfather driving the whole family (or most of them, my mom had seven siblings) to California without stopping. He was a tough dude. But yeah, the stories are great about how things were back then.

Then dad would tell me about these apartment building/houses in Jersey City that were three stories that would have have different parts of the family living in different sections of these buildings.

They'll be out here to visit in April for the last time (thank god for that) so I'll probably dig into some more stories then.

Born in 68. Mom was stay at home and pretty much 95% or more were. from probably around grade 1 to grade 12 came home for lunch which was awesome always had a pudding for desert...a real cooked one...thanks mom. Elementary was 2 blocks and high school 1 mile, some days walked it 4 times!. I don't know how I friggen did it, had 1 hr.

Saturday matinees at theater (late 70's), were dropped off and they were usually a Godzilla movie or similar.

Even in high school would bike over to grandparents house once a week to cut their front and back lawn for 5 bucks, (for 5 goddamn bucks my grandpa expected a thorough job) it was like 10 miles away and they had an electric lawnmower sheesh.

dave b said:
I remember all that stuff (born in '58) Here's something my mom sent me years ago....so true.


> THOSE BORN 1920-1979
>
> TO ALL THE KIDS WHO SURVIVED the 1930's, 40's, 50's, 60's and 70's!!
>
> First, we survived being born to mothers who smoked and/or drank while they were pregnant.
>
> They took aspirin, ate blue cheese dressing, tuna from a can, and didn't get tested for diabetes.
>
> Then after that trauma, we were put to sleep on our tummies in baby cribs covered with bright colored lead-based paints.
>
> We had no childproof lids on medicine bottles, doors or cabinets and when we rode our bikes, we had no helmets, not to mention, the risks we took hitchhiking.
>
> As infants &children, we would ride in cars with no car seats, booster seats, seat belts or air bags.
>
> Riding in the back of a pick up on a warm day was always a special treat.
>
> We drank water from the garden hose and NOT from a bottle.
>
> We shared one soft drink with four friends, from one bottle and NO ONE actually died from this.
>
> We ate cupcakes, white bread and real butter and drank Kool-aid made with sugar, but we weren't overweight because,
> WE WERE ALWAYS OUTSIDE PLAYING!
>
> We would leave home in the morning and play all day, as long as we were back when the streetlights came on .
>
> No one was able to reach us all day.And we were OK.
>
> We would spend hours building our go-carts out of scraps and then ride down the hill, only to find out we forgot the brakes After running into the bushes a few times, we learned to solve the problem.
>
>
> We did not have Playstations, Nintendo's, X-boxes, no video games at all, no 150 channels on cable, no video movies or DVD's, no surround-sound or CD's, no cell phones, no personal computers, no
> Internet or chat rooms.......
>
> WE HAD FRIENDS and we went outside and found them!
>
> We fell out of trees, got cut, broke bones and teeth and there were no lawsuits from these accidents.
>
> We ate worms and mud pies made from dirt, and the worms did not live in us forever.
>
> We were given BB guns for our 10th birthdays, made up games with sticks and tennis balls and, although we were told it would happen, we did not poke out very many eyes.
>
> We rode bikes or walked to a friend's house and knocked on the door or rang the bell, or just walked in and talked to them!
>
> Little League had tryouts and not everyone made the team. Those who didn't had to learn to deal with disappointment. Imagine that!!
>
> The idea of a parent bailing us out if we broke the law was unheard of. They actually sided with the law!
>
> These generations have produced some of the best risk-takers, problem solvers and inventors ever!
>
> The past 50 years have been an explosion of innovation and new ideas.
>
> We had freedom, failure, success and responsibility, and we learned HOW TO DEAL WITH IT ALL!
>
> If YOU are one of them CONGRATULATIONS!
> You might want to share this with others who have had the luck to grow up as kids, before the lawyers and the government regulated so much of our lives for our own good .
>
> While you are at it, forward it to your kids so they will know how brave (and lucky) their parents were.
>
> Kind of makes you want to run through the house with scissors, doesn't it?!
Click to expand...

I have gotten this one before too. Dang we are getting old. Just think what our kids and grand kids will be tell the future generations about what they had. Some of these things we had will only be seen in a museum..