Riding bikes, coasters and skateboards, and modifying them in our garages and using and losing dads tools. That led to working on and modifying cars and motorcycles when we got older. Then even later, providing the ability to fix things at home, like a leaky faucet, installing a new dishwasher, a brake job etc.

Do kids these days do that? Will they be able to do any of it? Not from what I have seen.

Forget pea shooters, these were the bomb...

I can remember going into a drugstore and buying sulphur flowers and potassium nitrate from which you could make rocket fuel or a small bomb. I'm older than any of you but still rockin it, just spent nine days skippering a sailboat in Belize with four ladies and another guy snorkelling the keys and drinking cheap rum...

TheX said:
Eisenhower was president when I was born.
Click to expand...

I can remember going to the local train station and handing out "I like Ike" buttons at rush hour. I was pretty young at the time.

I remember when the Dead Sea was still sick.

I'm so old that I remember eating pterosaur eggs for breakfast!

When it came to the list of sixteen items, the only thing I didn't commonly see as a kid were 78rpm records. Got fifteen out of the sixteen, then, and thus qualify as being "older than dirt"...

Sloppy Joe said:
Riding bikes, coasters and skateboards, and modifying them in our garages and using and losing dads tools. That led to working on and modifying cars and motorcycles when we got older. Then even later, providing the ability to fix things at home, like a leaky faucet, installing a new dishwasher, a brake job etc.

Do kids these days do that? Will they be able to do any of it? Not from what I have seen.
Click to expand...

I guess I'm old as dirt. I remember all of them.

This reminds me of one story when I was a kid. We were all down in the woods playing in the creek. I caught a big frog and was carrying it home in a coffee can. We were walking past this kid's house who was older than us. He was a teenager with his own car and kind of a tough guy bully. It was the most beautiful midnight blue 65 GTO I had ever seen.

He spent all morning in his driveway washing, waxing and polishing his GTO. We started gawking at his car on the way home and he started talking with us. We showed him our frog, then he took it from us and decided it would be cool to put a firecracker in its mouth. We were begging him to stop but he blew that poor frog to smithereens and we were pretty shocked.

While we were almost in tears and he was laughing his ass off, he slowly turned to realize his beautiful GTO was covered with frog guts from bumper to bumper. That kid was a real dick.

Oh yeah, this all happened in the suburbs of Maryland, just outside of DC. I remember standing on the curb with my Mom and Dad watching JFKs caisson pass, with Jackie, Robert and Ted all walking behind it. We lived about 5 miles from Andrews AFB. Every time the president would leave town, AF-1 would fly right over our house while making its ascent.

Hell.. that was easy.

First time you ever saw square head lights? What were the first cars with them?

Hell, I remember when all we had was taillights and we had to backup to get anywhere.

I can remember when you had to turn on the car's ignition switch and then press a separate starter button. Windshields had two separate panels.

I grew up in Houston before there was a mosquito control district. Our neighborhood civic club paid a contractor to spray DDT once a month. When the DDT truck came by blowing thick white smoke, we loved to run behind it and get in the smoke.

The only phone service in our neighborhood was an eight-party line until about 1952.

THDNUT said:
Forget pea shooters, these were the bomb...

Remember wrist rockets? Those were bad-ass too.

Dave_W said:
I grew up in Houston before there was a mosquito control district. Our neighborhood civic club paid a contractor to spray DDT once a month. When the DDT truck came by blowing thick white smoke, we loved to run behind it and get in the smoke.
Click to expand...

Same thing growing up in Florida.

1) Riding in the back window of the car, especially on road trips.

2) Ruining what could have become a fortune worth of baseball cards between the spokes.

4) You pretty much had to go to a barber shop to get a haircut. That is unless your mother had that one friend that would always volunteer.

6) All nighters at the local drive in movie.

Other things I remember:

* Bringing lunch to school---a hearty meaty sandwich, a couple of Twinkies, a can of Coke or Orange Crush---and not having the school or neighbourhood nannies demanding you or your parents submit to lectures about nutrition from people who thought Julia Child was a subversive influence on our health.

* For that matter, lunch periods called lunch, not "nutrition."

* Tying hangman's knots in the cords on the school window shades and getting laughs even from the teachers . . . not suspended for issuing threats.

* Transistor radios the size of cigarette packs with earphones you could rig up to listen to the World Series or the space launches (in that order---priorities, you know!) in class with the teacher's full approval.

* Sticking baseball cards or balloons in the spokes of your bike wheels so you could make an unconscionable racket just like the motorcycle guys.

* Telling a girl she looked beautiful and not being dragged to the principal's office for sexual harassment.

* Getting kissed by a girl without her being dragged to the principal's office for inappropriate behaviour.

* The New York World's Fair---it might have been one of the biggest boondoggles in New York fiscal history but brother was it fun climbing behind the wheel of a new Mustang in the Ford Pavilion!

* Eight daily newspapers in New York City before the 1963 strike that destroyed four of them.

* Local CBS afternoon movie The Early Show and late night movie The Late Show and The Late Late SHow, all using this theme:

* Bakeries that sent trucks around the neighbourhood selling goodies such as . . . 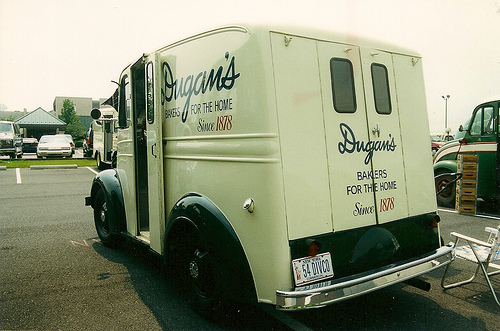 * Elsie the Cow coming 'round the neighbourhood:

I love this thread

JTM45 said:
I love this thread
Click to expand...

I'm young at 51 but man we grew up in a good era, tv was wholesome, food was homemade and GMO free, go home when the streetlights came on, collecting soda bottles, Disney on Sundays at 7:30, sonny and cher, the Osmonds, Ultraman, Batman, Green Acres, Beverly Hillbillies, Don Kirschner, I could go forever. Good times and memories.

Captain Kangaroo
Short Wave radio
Biplane crop dusters that flew under the power lines
Little strips of foil in the yard dropped by military planes, don't remember what it was called
Riding behind a tractor in a stone boat
Walking down the road with a rifle or shotgun over my shoulder
Trap lines
Old riding lawn mowers with the pulleys reversed to go 30 mph
Lost in Space

I could go on for hours.

Great post OP !!! I grew up looking out the back window of my parents station wagon . For years I thought the white lines on the road went past you and you didn't pass them!! What I remember is getting our very first color TV and a cassette player after getting rid of eight track tapes . Man we had the advantage in music cause I got to see all the great bands that influenced music today ,,, The original Chicago with Terry Kath and Cetera on bass, Allman Bros , ZZ Top when they were bluesy , Original Skynyrd , Alice Cooper , Doobie Brothers, Aerosmith , way too many to mention . Being older has its advantage . The technology is great if you use it correctly to your advantage . But being nostalgic is still fun like this thread reading about all of the great things we enjoyed in the past.

[ame]http://www.youtube.com/watch?v=rYETHsxAv8c[/ame]
You must log in or register to reply here.