Anyone recording or simulating amps on an ipad? Or both?

Interested in the mobility but dont know what kind of audio interface works on them or how to connect using lightning? Also, is the sound quality low and latency high?

I suppose I could find a refurbished laptop and dedicate it for music but I own an ipad.

Check out the Line 6 Sonic Port. The Mobile Pod app has plenty of amps, pedals and effects. It does work with Garage Band and has a line out as well.

anticarnist said:
Check out the Line 6 Sonic Port. The Mobile Pod app has plenty of amps, pedals and effects. It does work with Garage Band and has a line out as well.
Click to expand...

I just checked this out and it looks neat. However, there is a kerfuffle over it not working with iOS 13. May want to explore that before any plunge.

I use one of these adapters and a Focusrite 2i2. It's a super setup. I use Amplitube and Garageband on my iPad or iPhone. The adapter charges your iPad and powers the Focusrite. This setup also enables you to plug the Focusrite into powered monitors.

Hi Jaycoyoyo, Im a little confused. You use the line 6 sonic port audio interface to power a Focusrite interface? Hoping you can expand on this.

iPad works pretty good with sim apps. My preferred are Bias FX and Bias Amp, but it’s just a preference. Plenty of options available for cheapo.

To work smooth, without worrying about battery or throttling, you need an apple camera kit, like that 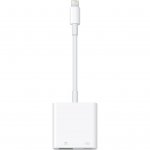 so that you can plug your USB compliant audio interface to the USB port, while keeping the device in charge. You can also plug a compliant USB hub to connect multiple USB devices to the iPad.

As for the audio interface, you have plenty of options as well. iRig does decent stuff, L6 too, again, just pick your own, based on your budget. Remember you need an interface with a proper instrument input for the guitar impedance.

For the output, you have couple of options as well; just plug the speakers from the headphone output (you need a damn adapter for last gen iPads), or using the audio interface output, if available in the hardware.

Only major cons on such setup, like happens in any DAW, it’s latency. Better the hardware (ipad and audio interface) the better buffer you can use, hence less latency.

If you want to play with headphones, grab a pair with low impedance and possibly closed or semi. Open sucks for guitar.

Lhdr said:
Hi Jaycoyoyo, Im a little confused. You use the line 6 sonic port audio interface to power a Focusrite interface? Hoping you can expand on this.

No I use the Apple Camera Adapter that I linked to power the Focusrite. PierM expanded on this above.

I use this on my iPad. I had originally ordered the iRig 2 and some guitar strings from Guitar Center and they cancelled my string order without any notification or reason. I had to get them for Sweetwater instead. When my iRig arrived, they sent me the more expensive HD2.
I wasn’t mad at them anymore.

I’m a big fan of the Positive Grid stuff, Bias Amp 2, Bias FX, Bias Pedal, and xDrummer. IMO, best on the market and worth every penny.
Last edited: Jan 14, 2020

We're using a Focusrite 18i8 into the iPad using Auria software. Whatever interface you use will preferably need a separate power input. Otherwise you will need a different connector that will supply power to your ipad. Not a big problem, but I like the way we've set it up for live full band recordings

This video I s straight into GarageBand....

Second one is Auria which I think is worth the extra bucks(standard iPads use Auria, iPad Pro use Auria pro)...