Any other Headrush users out there?

I've been using a Headrush Gigboard + FRFR for almost 2 years now. I came from using different Boss GT models. After the GT-100, I thought of trying out a modeler with IR loading capabilities. The Boss GT-1000 was too expensive, so I tried out Headrush. It has been great so far! When the Boss GT-1000CORE came out, I got excited being a Boss fanboi, and ordered. I intended to replace my Headrush. But when I compared both, the Headrush still stood out. So, I returned the Boss. 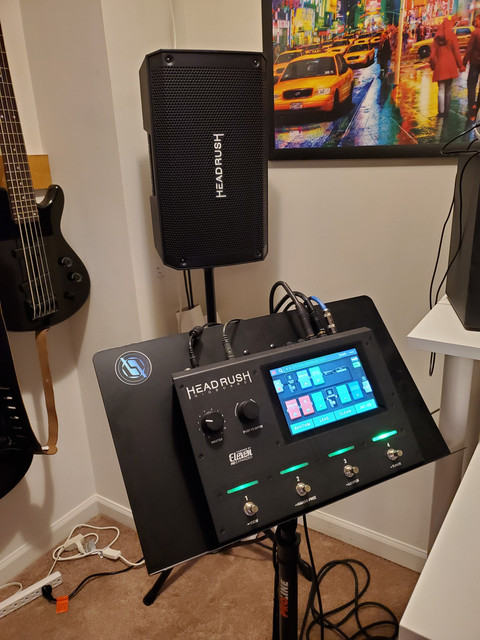 Then, I got a 2nd Headrush FRFR108 cab for my birthday from my family! I have just set it up and it sounds so GOOD that I almost wet my pants! It's my first time to try a stereo rig in my 30+ years of pretend playing! It sounds weird - but in a good way! It's like the sounds come from the center but there are some echoes and whatnots going on thrown at me from the left and right!

FRFR means full range-flat response to those who are not familiar. They're great amplification for mfx/modelers as they do not color the tone that the modeler is meant to reproduce.

Now, I have to wait until summer break before I could really play and enjoy!

I have done a few projects using my Gigboard already.

That is great.
Egad, everything about it.

I use the same FRFR with my AX8 and like it a lot. And it was a great price!

I run an Axe FX III through Xitone 2x12 FRFR and/or Studio Monitors as my primary rig (I also have a small Modelling Combo, and a PG Spark for quick LV/BR practicing), but I won't hold having a Headrush against you

. ALL are welcome her, who understand the power, versatility and great tone of modellers.

I’ve had mine for about a year, absolutely love it. It’s the main base of my effects setup, the only thing I wasn’t convinced on was the rotary effects - hence the Mini Vent Mini Forklift Ⓥ said:
Oh and I still prefer getting my overdrive from pedals - that’s the job of that red pedal on my board
Click to expand...

Have you tried the Klon sim in the latest update?

littlebadboy said:
Have you tried the Klon sim in the latest update?
Click to expand...

Didn’t know there had been up update, thanks for the heads up

Mini Forklift Ⓥ said:
Didn’t know there had been up update, thanks for the heads up
Click to expand...

There are some nice goodies! I like the new Ambiverb too!

Yeah I like the sound of that and the Klon. Have just done the firmware update so I'll try it out later... I might have even saved myself a few $$ on some new pedals

Well colour me impressed! It was pretty much the Klon and the AmbiVerb that piqued my interest and they both delivered. Outstanding

Mini Forklift Ⓥ said:
Well colour me impressed! It was pretty much the Klon and the AmbiVerb that piqued my interest and they both delivered. Outstanding
Click to expand...

Now... only if they could improve the tuner. A polyphonic one would be really cool.