I think the standard rule of thumb is it has to be something they’re tooled up to make already, done your way, within their standard play book. If they make or made models like you suggest then possibly.

I did a single pickup Les Paul through M2M and they did ask me about the control layout but they gave me two options: essentially just delete two knobs from a normal Les Paul or do the controls in straight line parallel with the neck like a Junior. They also asked if I wanted a pickguard. So I’m sure the pickguard delete is easy enough but I’d tend to agree with SMK above that they’d already need to have the templates/tooling ready to go for changes like moving a jack or a switch, even if the template might come from another model.

If you want the jack relocated, that should be possible in the custom shop but they'll probably charge an absurd price for simply drilling a new hole in a specific location.

By rights it should be simple, easy, and cheap. But I speak as someone who hand builds guitars one at a time and I don't use a fixture to position the output jack. I will be drilling a hole for that jack, but where I drill it is a matter of choice until it's done.

They’ll do anything you want but you’ll pay- big time.

RuneDanmark said:
the obvious problem is that when you take of the pickguard of an explorer and flying v, you can see the routing, there isn't any "top" on those guitars.

So it wouldn't be "easy enough" since they have to do all the routing under surface of the wood.

But yes gibson have made faded series V and explorer in 2016, but still with input jack on next to the vol/tone pots.
Click to expand...

You mean an Explorer like the one that Cesar just showed off on Instagram a few days ago? I don't use Instagram either, but Cesar is basically the current number 2 guy at Gibson, from what I understand. He regularly teases (aka leaks) upcoming releases on his Instagram account. That's an "84" Explorer he's holding, and there's some speculation that it MIGHT be a new James Hetfield signature model.

It might be, it might not be. Dave Mustaine and Kirk Hammett have both signed deals in the last couple of years. I think the Explorer that most people think of when they think of James is his white ESP, and that's pretty obviously very similar to the 84 Gibson Explorer. Plus, if you factor in that the pic Cesar posted also has a couple of Moderne guitars with Explorer headstocks (a guitar that Hammet was JUST seen playing on stage) immediately behind him, I think it becomes slightly more plausible. Particularly if you consider that Cesar has done things like that on Instagram a number of times now.
I'm not saying it's GOING to be a Hetfield signature, I'm not even saying it's PROBABLY going to be a Hetfield signature. I'm just saying that it MIGHT be, and stranger things have happened. Either way, I think the guitar looks pretty cool.

Trogly posted a great video about it.

RuneDanmark said:
the obvious problem is that when you take of the pickguard of an explorer and flying v, you can see the routing, there isn't any "top" on those guitars.

So it wouldn't be "easy enough" since they have to do all the routing under surface of the wood.

But yes gibson have made faded series V and explorer in 2016, but still with input jack on next to the vol/tone pots.
Click to expand... No pickguard on the v should not be an issue.

RuneDanmark said:
I guess it depends on the model.

I' m in the process of trying to spec a M2M Flying V with a Floyd Rose. I asked about not having a pickguard, Gibson said no. The custom shop did produce the Flying V Standard which did not have a pickguard, but I was told they are not currently making those. So what I'm waiting to hear back on is a Flying V Custom that will have a pickguard with a Floyd Rose. I too would like to move the input jack as well, but I'm trying to not run up the cost so I didn't ask. I do have a Zakk Wylde Custom Shop V, which does have the input jack on the upper wing like the new Mustaine model.

RuneDanmark said:
... Flying V without pickguard and move the input jack to the side of the V ...
Click to expand...

How about the Dave Mustaine V? 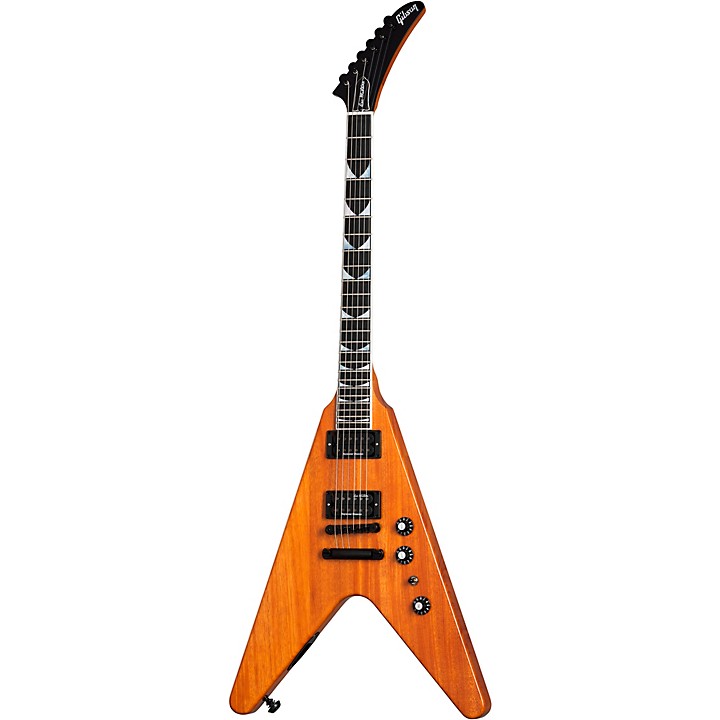 Can I ask a serious question? I'm not trying to be rude or anything, and with all due respect... Why does it need to be a Gibson? It really sounds like you want a guitar that isn't a Gibson at all, but you want it to say Gibson on the headstock. There are LOTS of alternatives that are very nice guitars that have the options you're looking for. Why not just get one of those and have the guitar that you really want?

M2M is certainly not about getting a fully custom guitar made to your specs. It is primarily about being able to choose wood blanks for a predetermined guitar....with a few pickup and other spec options.

If you want a completely custom guitar built to your exact specification, there are half a dozen guys in the Luthier's Corner section of MLP who could do that to a much higher standard than any of the big manufacturers' custom shops. Of course it won't say Gibson on the headstock, but if you're looking for a made to measure keeper then that won't matter.

Small luthiers will build anything you'd like, so you're fundamentally wrong there. Perhaps your lack of understanding here comes from the fact that they often build others' shapes - but with specs that the original company doesn't or can't include. The hideous irony here being that this is precisely the demographic you are in.

Well, it's clear that you are simply unwilling to learn or open yourself to possibilities. You are merely inventing reasons to stay away at this point judging by this last response.
No skin off my nose here as its only you that loses from not considering all options. But it certainly will influence me not to bother to give you any more input permanently.
You must log in or register to reply here.

11 legends of the Flying V and Explorer
2

Flying V and Explorer are Back
2