wils said:
hi pal.. its always cool fun searching for a new les paul.. or any other guitar i guess so i had a look online, mainly reverb to see what you can get for under £4k. first... dont buy a new les paul unless you have £8k at least to buy a new murphy lab r8 or 9. a new one these days quality wise isnt very good as the turnout of "standard models" whatever they call them ie 50's, 60's, traditional, standard, slash models etc (just marketing to sell more guitars) is over twice the numbers now compared to say 20 years ago plus you wont have any trouble getting your hands on a les paul that cost £2500 a few years ago for £1500. however i had a look on reverb and these are the best les pauls i found for under £4k that would be of interest to me (ive got so many now i dont need any more though.. no space for any more)...

with £4k you can get a really nice custom shop r8 with a nice top so it looks like an r9 (r8's were plain tops while r9s had tabby cats but the only r9 i found was a plain top??? makes no sence)

The 2003 - 2006 Custom Shop '59 Les Paul Reissue updated the original model with Gibson's Burstbucker pickups. It also featured a mahogany body with a figured maple top and a Vintage '59 neck profile with a rosewood fretboard. It was produced in Heritage Cherry Sunburst and Heritage Darkburst,...

--
not sure if these would be of interest to you

Gibson 1958 (R8) Les Paul special Custom Shop Made in 1999 In Faded CherryMade in Nashville USA in 1999 as part of the Custom Shop Historic SeriesA rare single cut guitar Some small marks but nothing majorComes with the original Custom Shop CasePlays like a custom shop guitar shouldSet up ...

First released in 1969, the Deluxe saw the introduction of the mini humbucker™ to the Les Paul lineup. Mini humbuckers retain the hum-free performance of their full-sized cousins but with a somewhat clearer and brighter tonality. The new Deluxe has features that were inspired by those early models

I have both of these LP's (not the ones online for sale) and they are very cool guitars.
for 4k you can basically get anything as long as they are not to old.. have you considered an es 335 etc, also great for under 4k. hope this helps pal. im considering selling a few of mine as im moving back to LA soon and i cant take them all with me but the only ones i have for under £4k is a 99 wine red special, the same as above and a 2005 gold top deluxe everything else is custom shop i have a nice R9 i might sell but i would be looking for the £6k mark...

anyway if i can help in any way (as i love guitar shopping) email me at [email protected] .. cheers and i hope you find a great LP pal, Wils
Click to expand...

Thanks for the detailed reply, I did end up getting an R8 (should be pics a few posts up) and am extremely pleased. Funnily enough a few of the ones you posted were on the shortlist if this particular one didn't work out - it was advertised on Facebook marketplace and much more local than the reverb ones.

It is very different from the other LPs I've played, and I am really enjoying the lower output pickups. Glad I went down the custom shop route for a "keeper", although I'm sure if a decent 90s one popped up nearby it would probably find its way here as well.

Nice choice! Enjoy. If you are considering another purchase have a look at the 2019 and newer 50’s Standard. At half the CS price, it’s very close to CS quality.

Six6String6 said:
Nice choice! Enjoy. If you are considering another purchase have a look at the 2019 and newer 50’s Standard. At half the CS price, it’s very close to CS quality.
Click to expand...

Just a small caveat to add to this-- despite the jump in quality since the regime change, there's still quite a bit of variance between current LP Standards/Deluxe models. My Les Paul Standard '60s compares remarkably well to my buddy's R0, but as much as I love my Standard '50s, while it's a VERY solid guitar, it's good, but not nearly Historic good.

But yeah, if you can't bear to drop CS Historic prices for a #2, consider a newer Standard (after the appropriate amount of due diligence, of course).

Built more or less by human hand so the hit and miss factor comes into play. Which applies to the reissue line as well I’ve heard. Still a few duds there.
I keep reading other people remark how much Epiphone has improved with its consistency in quality and in fact I would agree having had owned one not to long ago. More steps performed by machine, less by human hand. It can have an positive effect.
Yes, test them out before hand if you can. But by all means don’t rule them out. I love my 50’s Standard.

Congrats on your R8, hard to go wrong with one of those! FWIW I bought one of the 2021 60's LP's earlier this year, I got a dud. It was absolutely lifeless

The guitar I regret selling the most was my '93 Standard Premium Plus, it was crazy good. Right now I have an '04 Standard Plus which is also fantastic. If I have the cash to drop and new or 90's were the options yeah, I'd have to take the older LP's. Generally speaking Gibson were really on the ball in the 90's and early 00's
R

Early 2000s are considered one of the best periods for LPs. I have a 2003 that is amazing but it's weight relieved. Still sounds huge and dimensional.
Maybe weight relief adds complexity and air. I'd love a Standard in black or maybe the new Adam Jones, non weight relieved.
I had a 1994 black standard but it weighed 11 lbs and sounded pretty dead. Not sure why. Didn't have the 3-D quality of my 03.
The 94 also had very short, flat frets which were hard to get used to. 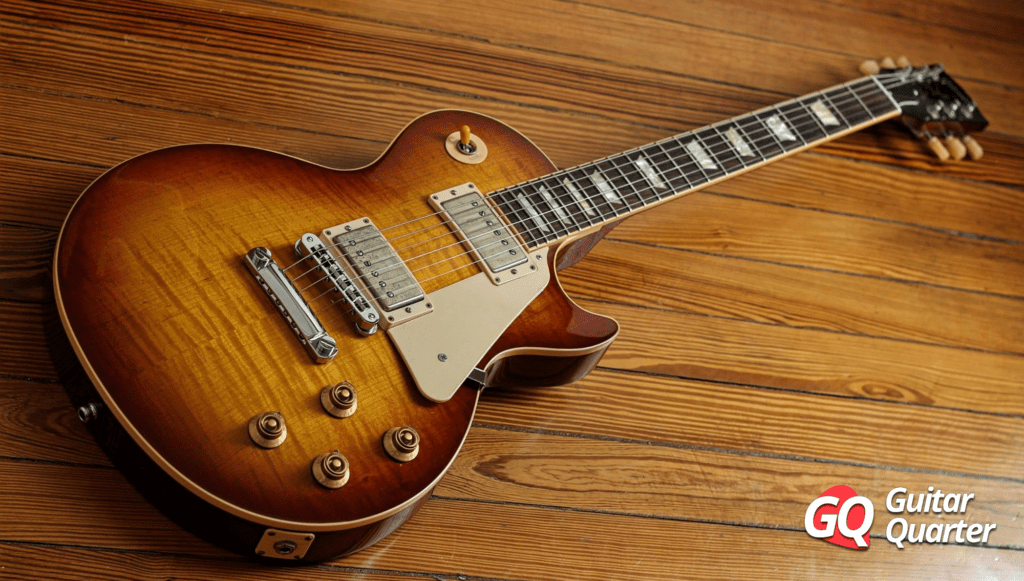 The best and worst years of Gibson Les Paul, its golden ages and dark ages: vintage and modern, qualities, characteristics and differences.

BadPenguin said:
I tend to go with used myself. All of the bugs have been worked out, and I don't need to spend more money and time in a setup.
Click to expand...

To which I say, heck yes! The supply of good used guitars in my area is vastly greater than what you can try firsthand in any shop. The value for money is way better. You can skip the beaters, over-modded stuff, etc. and with a little patience find an excellent guitar that has been played in, stabilized, and even lightly aged. Compared to ordering up a new production instrument or buying off the floor based on stock in hand in one shop, it's an easy decision for me.

Several other folks have already said "try before you buy"... I personally wouldn't spend 4kGBP on an axe I have never plugged in, played and tried. To me (pesonally) that would be insane.

Next, I try to buy "used" because, well for one thing Gibson's prices are through the roof (IMHO) and super over-priced for a design of instrument that was developed in the 1950s and hasn't changed much in all these years. Also, buying new, you are the person who takes a hit as soon as it is delivered or you walk out of the store with what is now (like it or not) a "used" instrument.

As a rule of thumb, you're going to take a hit of about 30% of what you just paid for the new instrument if in a year or something you decide you didn't bond with the (IMHO over-priced) guitar, and try to sell it. If you give 4k for the guitar, you will never see the same exact 4k out of the guitar when you sell it used. Might not be as much as 30% less, but it's not ever going to be all 100% of what you paid new for it.

Let some other clod take the 30% hit and buy used, mint... It's the same guitar, and the magic about buying used, is tht you'll get much closer to 100% of the money back out of the guitar if you do ever decide to sell it.

And... and here's where I get opinionated... paying all those bucks just to have a single guitar with the Gibson name on the headstock isn't my cup of tea. You'll see an avatar for me with the "Epiphone" headstock. Not only has Gibson/Epiphone (same company same leaders) upgraded their USA Gibsons, they have done an amazing job with their line of "Inspired by Gibson" Epiphones. The prices vary model-to-model... but for the same 4k, you could have EIGHT 500GBP Epiphones and stretch the different tones you can enjoy over several different pickup choices and guitar shapes. (Much more fun IMHO)

My story is... I am permanently disabled and living on $800USD social security income I can't possibly afford a 4kGBP anything. USA Gibsons, USA PRSs and the like are permanently out of my price range.

I have this guitar... 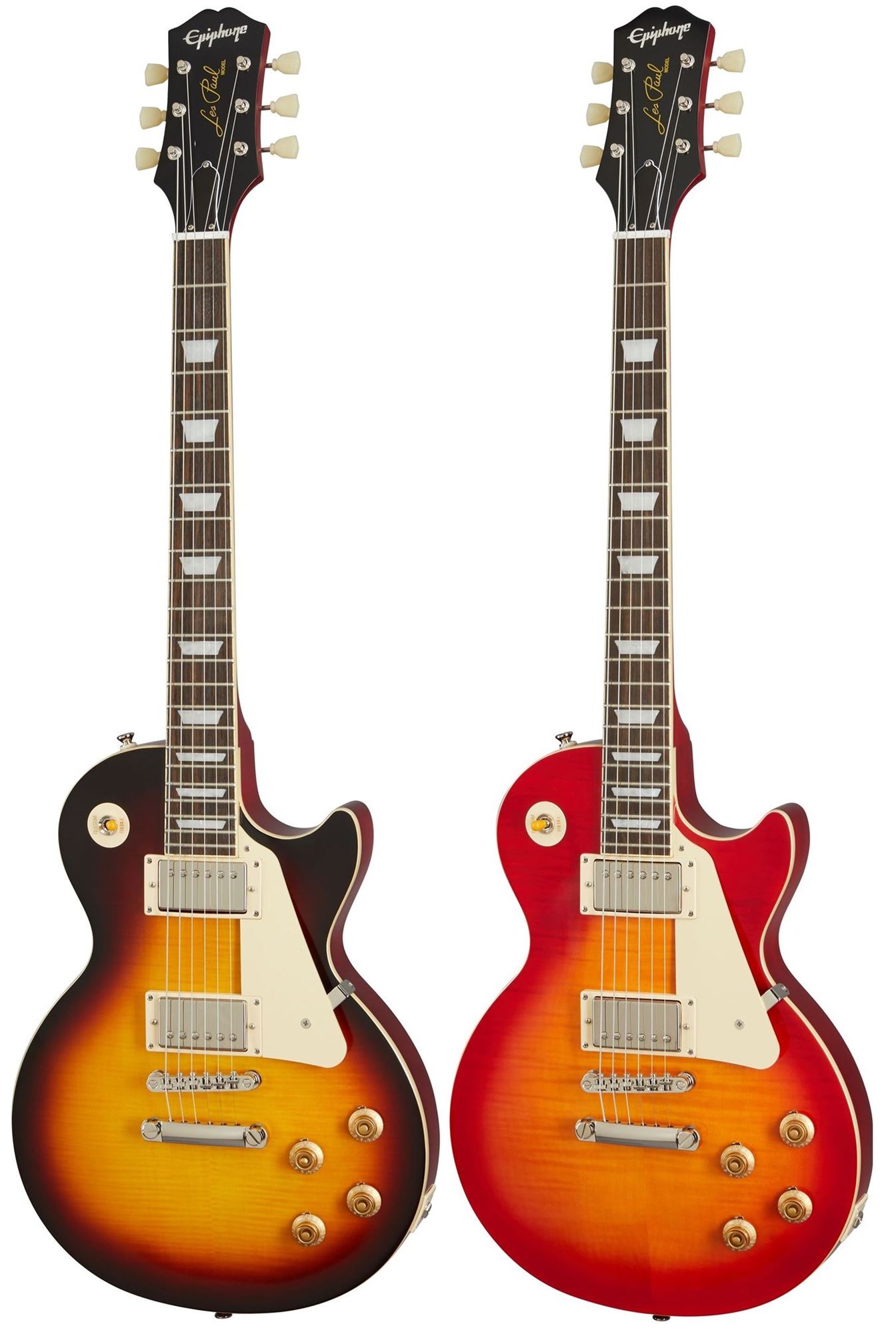 That's a LOT of bang for your buck. (even comes with a case)

Well that's my challenge. And my personal opinion.

I popped my "gotta have a Gibson" cherry when I was 17 years old, in 1980 I got a brand new 1980 Gibson Les Paul Artisan and the total USD was $925.60 back in the day (the new price of an Epiphone "Inspired by Gibson" today)... I still have it... It's a super heavy Norlin-era pig weighing in at 13lbs 6 oz. It was made in Kalamazoo, Michigan at the original Gibson plant, and had severe fretboard meets the body issues that by sending it back to Gibson (in Kalamazoo) TWICE under warranty they never did fix right. I got it fixed by a real lutheir in Los Angeles, California years later and never had the issue again. The fretboard where it met the body was peeling up so bad that I could stick a guitar pick under it all the way around... This was Gibson's top of the line (pretty much a) Les Paul Custom with fancy hearts and flowers inlay (something they no longer do, I'd be afraid to ask what their "custom shop" would ask for doing this on a LP today).

I love my Gibsons. Besides the Artisan I have 3 Traditionals, and in the past have had 3 different Standards. But that was when I was pretty well-off in the vocation as a contract field engineer for any and all Ma Bell telephone system here in the USA. I'd the guy that walks the field and draws up the pre-construction plans the construction crew uses to put new cabkle in the ground or on the poles. Back then I used to make in one or two days what they piss at me with social security as a disabled person. So my unchange-able financial atmosphere has made me (forced me to be) rather extremely frugal. So add that to the equation of my opinion.

I've been playing guitar since 1975 and so far on layaway or some type of stretched [ayments, I have been able t buy and am completely happy with several of the Epiphone new line up of "Inspired by Gibson...

My ‘69 ES 355TDSV says “Union made” on the sticker.
You must log in or register to reply here.