I just got my first Les Paul and it plays like a dream. It is my first big guitar purchase so I am being a little picky and would like to get some feedback/advice on how to proceed with certain small issues. I plan to keep this guitar as there are no deal breakers but I wanted to know if the toggle switch not being perfectly flush with the body is something that others have noticed on 2017 Studio T models.

This model does not have the poker chip washer (like most 2017s) but it also uses a very shallow washer nut on top of the toggle switch. This means that it is almost impossible for it to sit absolutely flush on the body of the guitar which itself is not perfectly flat in that area. It could be that either the finish on top of the guitar is a little thicker in that area or that the surface inside the switch cavity is not 100% flat or parallel with the top surface.

I am including a couple of pics of my guitar as well as a stock photo I found online that also seems to show a bit of a gap between the washer and the body of the guitar.

It is a brand new instrument so I am hesitant to open things up and start fiddling with things and risking scratching the finish. For anyone who has played around with the 2017 Studio T model and installed the poker chip washer - were you able to unscrew the washer nut without tools? I would really appreciate it if people can check their 2017 models to see how flush the toggle switch nut is against the body.

Second small issue is some glue/gunk that is barely visible just in front of the first fret. I have not tried scraping it out because I was not sure if it was simply a residue that should have been cleaned up or whether it was there for some purpose. I am including a couple of pics.

Thank you for your feedback and advice.

Here is a quick update. As I was playing with the switch a bit more, I realized that it simply was not tight enough. While I tried to unscrew the switch tip, the entire assembly would start rotating.

So, I took off the switch cavity cover and hand tightened the knob from the front while applying some counterforce while holding the switch from the inside.

I am including the picture of the final product. I would say that it is at least 50% more flush and definitely tighter. Either the nut washer worked itself a bit loose during the shipping or whoever put it on in the factory did not want to overtighten it not to mar the finish.

We're all aware of a loose nut at Gibson, but this isn't exactly the one. Glad you sorted it out.

Yeah, that looks fine to me on that last picture.
B

Ya I am much happier with how it is sitting now.
The only other issue that remains is that whitish substance between the first fret and the fretboard. Has anyone with a new Gibson ever seen this? I am wondering if it is simply residue from some material used to protect the fretboard during the manufacturing. I thought Gibson did not glue the frets. My only concern would be to try and scrape this substance away if it actually has some functional purpose (i.e. to hold the fret in place). Could it be nitro overspray that they forgot to remove?

Here is a close up. 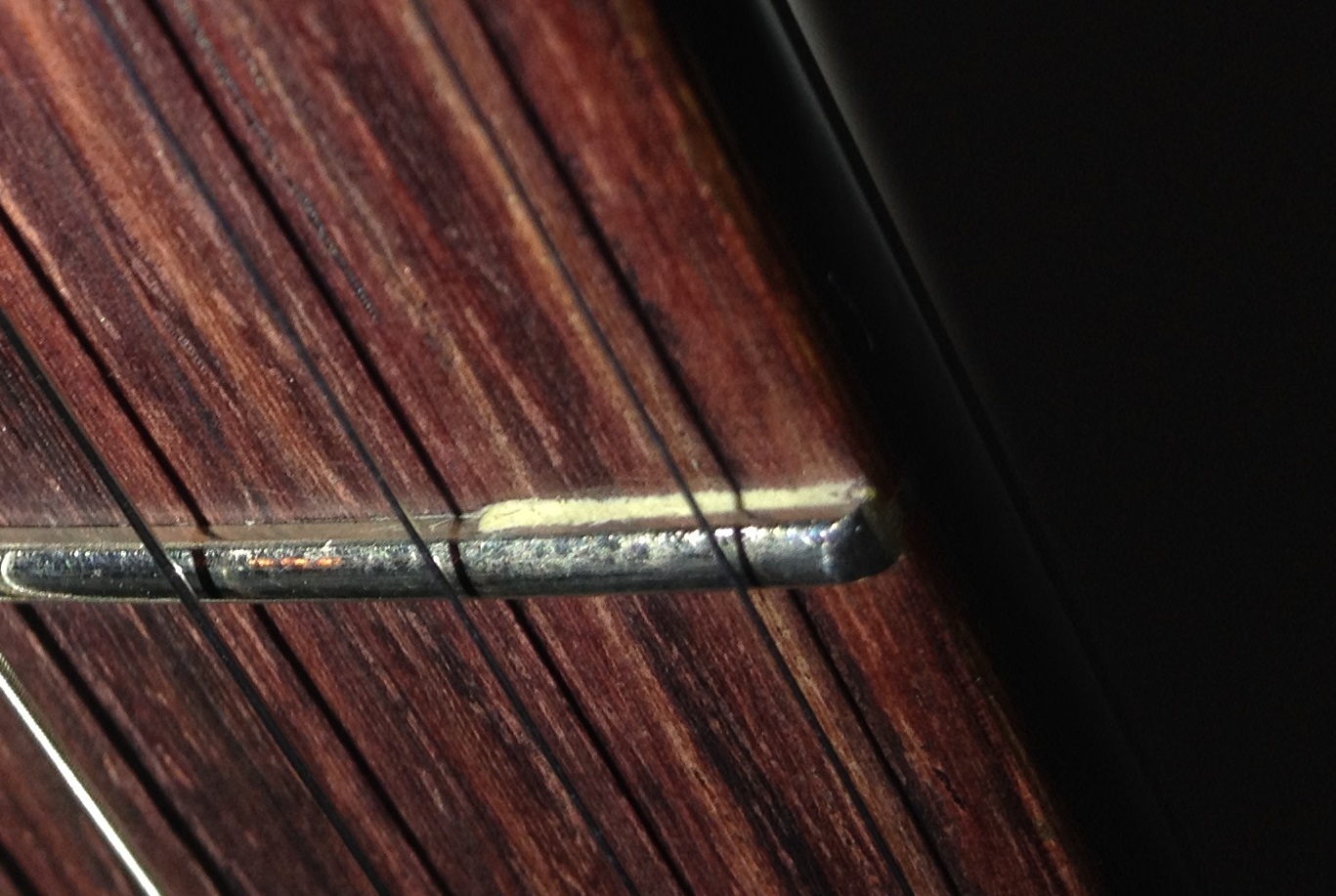 Yep, that's some gunk for sure and I'm thinking its glue. Maybe just sand it down or use a razer blade to get rid of it.

Have you changed the strings and oiled the fretboard yet?
B

rjwilson37 said:
Yep, that's some gunk for sure and I'm thinking its glue. Maybe just sand it down or use a razer blade to get rid of it.

Have you changed the strings and oiled the fretboard yet?
Click to expand...

Not yet...I know I have to do it soon

I am thinking it is likely the residue from the tape they use to cover the fretboard while spraying the guitar with nitro paint. When I am oiling the fretboard I will try to poke it with a toothpick. I am too nervous to use a razor blade considering it's a brand new guitar.
B

Solved. Toothpick took care of it with minimum amount of force applied. Looked like wood shavings.
You must log in or register to reply here.