ARandall said:
The 490 set (actually 2 490R's in this case), not the 498.
They did have I think mag swaps, short A5 and A4 from memory. But still a good lesson on fitting pickups to suit the guitar
Click to expand...

Aha! Magnet swaps... at least that's a topic that I know something about!

The 490R, which can be considered muddy at times in the neck, would in my mind sound pretty balanced in the bridge. And since it's way more mellow than the 498, makes great sense. And the A4 is a sweet magnet for the neck. I have one in a 59n in an LP, and it completely tamed the boomy bass. Sounds like a solid matchup there!

I bought them as a 't-top lite' pickup when I was starting out my pickup journey. I was initially disappointed as they didn't quite get the tone in their intended guitar, so the semihollow got the first modded pair, and second pair went into a HSH strat build - which was my first attempt at a multiply bound guitar.

To the point of the OP, I concur completely with the 2016 Trad sentiment. I'm not going to say best ever, etc... but generally speaking, they seem to really be consistently good across a *lot* of feedback I have heard.

My experience: I bought one used with a broken headstock (unrepaired). The guy must have bought it, then dropped the case or something, because the frets, body, everything was otherwise pristine. I repaired the neck myself. Other than the repair, the fit, finish, specs, all are just outstanding. I sold my R8 once this came into the stable.

I've owned 3 2016 Trad Ts, and all were what I consider to be good guitars. One in particular is especially good... even venturing into what I call "great". It's a honey burst with a top that could easily have been on a Reissue. I still have that one have no plans to ever sell it. I've since moved onto buying Reissues (have owned 4 and haven't bought another Gibson USA LP since)... and while the RIs are certainly a different breed with different (ie, more historically correct) build specs and definitely have a different vibe and "feel" to them... I have to be honest, my 2016 Trad can hang very, very well with them tone/sound-wise.

My sample size is too small (and frankly so is the sample size of any of us here who've tried even several 2016s), but IME I'd have to agree with the OP, 2016 seems to have been a good year and it's one that I'd pay extra attention to were I looking for another Trad (which I'm not).

The new 2019s are spec'd out pretty nicely and a Standard 50s would be high on my list if I were in the market too. That said, they do all seem to be pretty heavy guitars though (which is a turn-off to me) since they aren't weight-relieved. Not to hijack this into another unproductive weight relief discussion, but for me personally I've never experienced what I'd call any negative effects from the Traditional Weight Relief (ie, 9-hole) used on the 2016 Trads. And as much as I do appreciate the long neck tenon in my two remaining R8s, again, I've never experienced any negative effects from the short tenon of my 2016 Trad. It's got killer sustain and resonance... easily as good as any of the R8s I've owned (except one of them which is the greatest sustaining LP I've even owned and/or personally had my hands on).

Anyway, point is, those historically "incorrect" things about my 2016 Trad seem to have no negatives associated with them other than the stigma of being... "incorrect". And frankly, I prefer the lighter weight that the 9-holes give me (it's around 8.5lbs) and I couldn't ask for better sustain from its short tenon. So hard to complain really.

I will add that I did mod mine extensively to get it more "correct" looking and feeling *and* to improve its tone and sustain. I added a Faber ABRN bridge with the Faber iNserts. And a Faber aluminum tailpiece with Faber locking tailpiece studs (all in aged nickel). Also I over the years I have swapped in many different pickups (several of which were very good in it) because I'm not a fan of 57 Classics (generic and one-dimensional sounding to my ear). So it's not exactly a "stock" 2016 Trad. But it had "good bones" from the start and I could tell that immediately. And all the mods I made have only improved it more and more. It's just a killer guitar, period.
Last edited: Sep 12, 2019
B

I can also agree that the ‘16 Gibson might be a bit special. I’ve got an amazing ‘16 Traditional I’ve had since new. I got it from AMS when they were blowing out all the ‘16 model year. My only complaints have already been stated here, chrome hardware and the Nashville bridge. Also, very dark sounding. I attribute that to the bridge and pickups possibly.

I’ve kept her stock up until this point. I wanted to make sure I was planning on keeping her before I started with some historically correct mods.

Here she is, all stock for now. 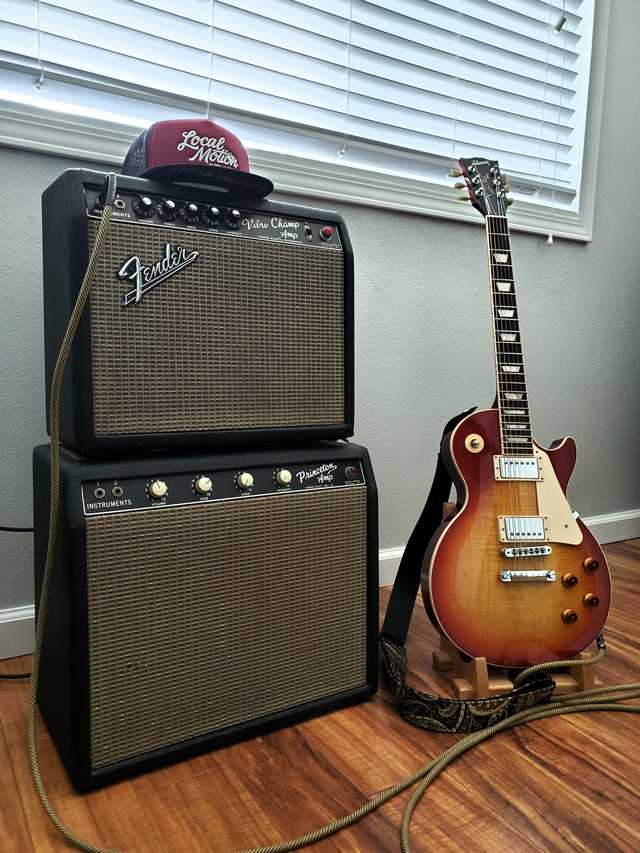 I’ve went ahead and ordered just about all the upgrade parts. I went with OX4 lowinds, creamtone plastics, and Faber aged bridge and tail piece w/ iNserts. I just need to get a new wiring harness and it’s on! Can’t wait.
You must log in or register to reply here.
Share:
Facebook Twitter Reddit Pinterest Tumblr WhatsApp Email Link