I thought I read somewhere that they're all CNC'd nowadays, is it true that all recent models have a flatter carve than a few years ago or is it still a bit random?

The 1968 LP originally has a flatter carve than a 1958 LP.... so it makes perfect sense the reissues are different as well.

mudface said:
The 1968 LP originally has a flatter carve than a 1958 LP.... so it makes perfect sense the reissues are different as well.
Click to expand...

Is that a fact? There aren't a lot of good pictures of '68s out there but this one definitely has a very different carve to mine, you can see the thumbwheels and bridge are quite low. Very much like a 58 or 59.


This one has a high bridge 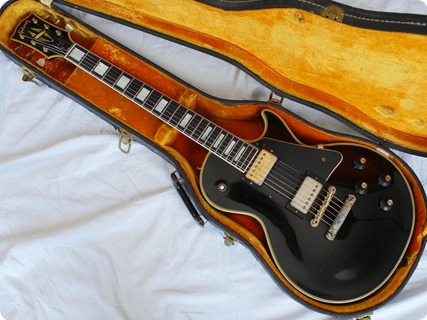 This will really blow you away… This is a STUNNING original late 1968 early 1969 Gibson Les Paul Custom + OHSC It has all the desirable 1968 features such as a LONG NECK TENON,
www.vintageandrare.com

Maybe I can ask the question another way. Are 2019 historics very consistent in their top carves or is there variance?
Last edited: Sep 29, 2020

You gotta keep in mind that the carve is not main influence on bridge height,.... it's the angle of the neck set. The neck set can differ quite a bit from one LP to another as each one is hand fitted. This happens across all years and models,... a half of a degree makes a big difference.

My 2020 is flatter than my 2018 and 2013, but what I could do is this: I work in 3d model creation for a living, I use photogrammetry (creates a 3d model much like the lid at type systems probably used to capture tops for Gibson TH line, but way cheaper as just needs a camera) I use a ruler in the capture and can get scale pretty much identical for any guitars I do in this manner. The bonus is I get a nice 3d model of my guitar, got a few jobs on at the moment, so won't be right away.
Last edited: Sep 29, 2020

Flatter won't make the bridge sit higher.......the abr is practically right at the top of the virgin maple slab however pronounced the curve is.
What does make a difference here is:
actual neck angle
actual maple thickness

small differences to either of these as mentioned are significant.

ARandall said:
Flatter won't make the bridge sit higher.......the abr is practically right at the top of the virgin maple slab however pronounced the curve is.
What does make a difference here is:
actual neck angle
actual maple thickness

small differences to either of these as mentioned are significant.
Click to expand...

I'm pretty sure the 2013 has a greater angle and it's due to the carve.

Pretty sure.......based on what?
I'm basing my knowledge and advice on having built about 25+ set neck carved top guitars from scratch btw.

A good example of this is the nearly flat 1952 Les Paul neck angle on a very carved top.... the trapeze style bridge had to have the strings wrapped under the bridge to get the strings low enough to the fretboard. The only way to install a ABR bridge on that is to route a channel in the body or remove half the thickness of the ABR or reset the neck,..... and ‘52s have a nice carve though the neck is set flat.
Last edited: Oct 1, 2020

Another thing to keep in mind is the thickness of the maple cap,... as mentioned by ARandall,... the cap is thicker at the bridge than anywhere else on the body. Though the thinnest is at the neck join and the dish carve around the edge of the body..... to adjust for a set neck the area around the route needs to be addressed accordingly (sanded or flatten) to have the bottom surface of the fretboard to be glued to. This will have great effect on the pitch (angle as related to the flat slab mahogany) of the set neck.

Maybe @LtDave32 can explain better than i how critical this process is and how it can affect bridge height.
Last edited: Oct 1, 2020

Exactly. The 2013 has a greater neck angle, so all things being equal should have a higher bridge. But the opposite is the case, due to the difference in carve.

ARandall said:
Pretty sure.......based on what?
I'm basing my knowledge and advice on having built about 25+ set neck carved top guitars from scratch btw.
Click to expand...

Err? Based on having both side by side. I just looked again, the 2013 has a much greater neck angle. Or did you build my guitars?

A very rounded top can have a small distance to the underside of the bridge at the highest point (center line or middle of the bridge) , whereas the distance at the thumb wheels can be much greater because the carve slopes down there.

See the drawing I attached. On both the distance from top to underside bridge is the same in the middle, but because of the very rounded carve you see much more post length.

Your situation is opposite. The bridge on the 68 sits higher but the carve is flatter. This can only mean that the neck angle is greater or that the maple cap is thinner.

If the neck angle is the same, maybe the carve started out the same as on the 2013, but they sanded the highest point flatter (so making the maple cap thinner) . The bridge is still at the same hight, but the cap lowered, so the bridge seems to sit higher.

I hope this makes sense.

Mine are all different. Does it matter? No! Is the sound good? yes!

The tenon/neck pocket sets the neck angle. You can think of the neck pivoting at the pocket. The plane of the neck determines the bridge's position in space.

The bridge height doesn't determine the neck angle. It's a result of, not the driver of.

These days I doubt mahogany/maple thickness or even carve varies much. Blanks get thickness planed and carves are cnc. It would be down to manufacturing tolerances and whatever finish sanding is done by hand.
I'd say it's the hand fitting of the neck to the body that causes most of the variance.

If its one thing Gibson likes to do,its change-up the top carve in my examples! I can only comment on some i've owned.

The Norlins i once owned from the 70's were quite flat.

Thats Gibson for you.

Thread Title How humpy is your Les Paul flat-moderate humpy or humpy-hump!