braz is beautiful but anyone who is not a millionaire and spends 6-10k + on a reissue is out of his mind. no offense but that’s my opinion. you can get a vintage gibson (mid 60s SG?) or a used r9 plus a lot of change for that money

I’m not sure what kind of mahogany Gibson used prior to 2013 but I can say that the post 2012 historics I’ve owned are as a whole, better in every qualitative way. So much so, i am no longer interested in buying a conversion.

empirically too, the brazilian Rosewood used in 2017, 2108 and 2019 are some of the nicest dark brazilian boards I’ve seen and appear to be a significant step up from the variegated brazilian stumpwood used on many of the 2003 historics.

as a point of fact the term “good wood” is completely meaningless statement that cannot be substantiated. like other marketing terms designed to deceive, it seems to be bandied about by folks trying to a hock an older, less accurate, historic for more money.

another point of fact, around the time of WW2, due to mahogany shortages, Swietenia macrophylla aka Honduran mahogany was planted on the island of Fiji due to its ideal climate and strategic location. there is no such species as fijian mahogany as mahogany was not a native tree to fiji. A sugar maple tree is a sugar maple tree regardless of what country its grown in, the same is true for mahogany.

Another point. if you put luxe bees and vintage style pots in a 2018 Brazilian, viola, you have a 2019 brazilian.

Its nickname will be: "The Kiss" based on the figuring of the top... it has one part of grain figuring that makes it look a woman kissed it...

You can buy a fucking vintage pre-1965 Gibson with Braz board for the same price or less than either...so?

Another consideration for you if The Kiss doesn't work out -

What about an HM? or a replica?

The BRW HM uses is fantastic, same with most replica builders. You'll pay much less in most cases (not super high end replicas) and get other cool features too. Just throwing that into the mix. Best of luck either way!

If you’re going to spend over $10k, you could pick up a converted 52 for a little more. These Braz prices are just ridiculous.

So I gave the guitar the nickname: "The Kiss". Te grainspot looks exactly like a kiss! 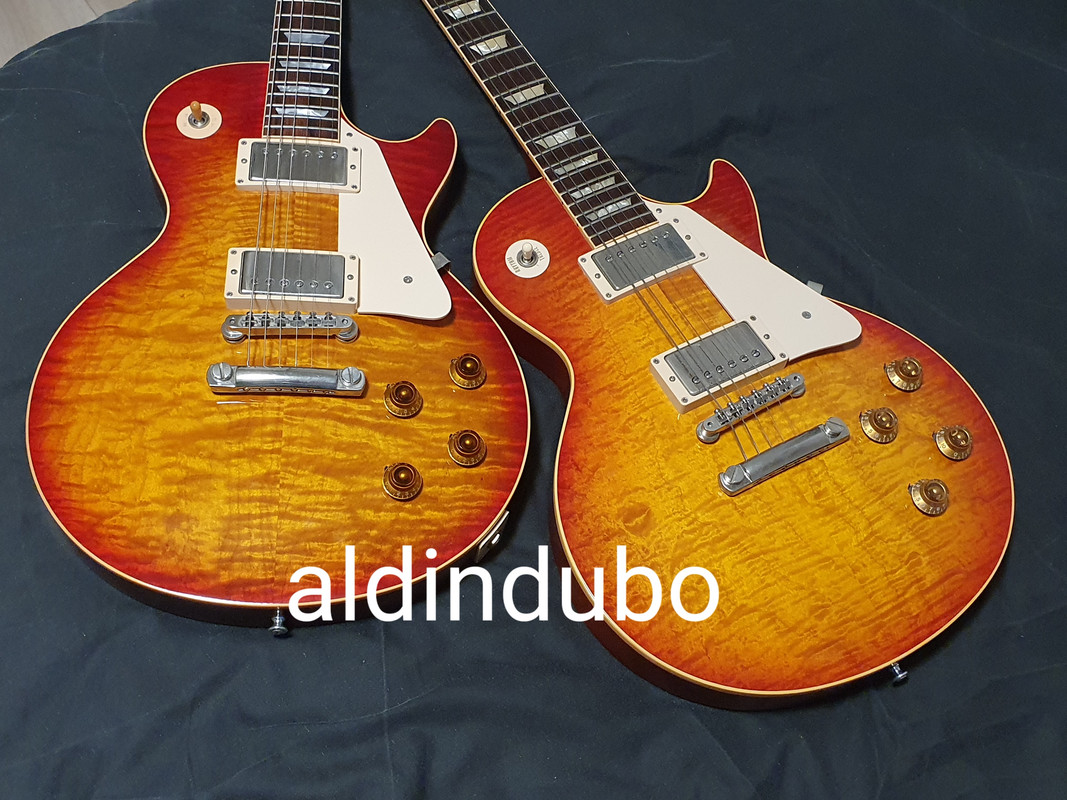 if you are looking for more figured flames. Post 2012 (13-14), there are plenty of big flames, do a search for NGD between those two years and you will find mostly highly flamed R9s (and several R8s in the mix).

Absolutely nothing wrong with either of those beautiful guitars!!

I dont feel comfortable gigging such an expensive guitar.

Player grade vintage is the way to go.

I dont feel comfortable gigging such an expensive guitar.
Click to expand...

I would keep those. They have perfect, authentic looking flame.

ONEHERO said:
They don’t compare. Gibson confirmed that there are no official 2019 Braz - only Bolivian and Indian rosewood.
A small run had a Braz board but these are simply leftover necks (almost b stock) from 2017/18
Click to expand...

Whichever one has the fattest neck.

Unless the 03 really speaks to you. IMO they aren’t worth the premium some sellers place in them

hackenfort said:
I’d go with a 17,18,19 any day over the 03. Better specs and build and custombuckers. No truss today condom I

Unless the 03 really speaks to you. IMO they aren’t worth the premium some sellers place in them
Click to expand...

My friend, the choice has been made already some time ago and Im glad I went with the 2003.

I have already mentioned many times and today I had some time to make some nice pics. I got it for a steal, from the first owner who bought the guitar new back in the day in Germany. Only thing changed is the original nut to a bone nut, otherwise full original. I dont know what it is, but this...